The onslaught of campaign ads has dissipated and the elections are over.

But there’s still one more order of business and a couple of key votes ahead for Kansas senior Joe Dineen Jr.

During the past couple of months, the Kansas football program has had a little fun with election season and Dineen’s status as a nominee for several prominent national awards.

While he technically has not had to run against another candidate to reach this point, Dineen has played along with all of it, filming promotional videos, making appearances at other KU sporting events and participating in the social media buzz that has fallen under the simple slogan, “Vote Dineen.” 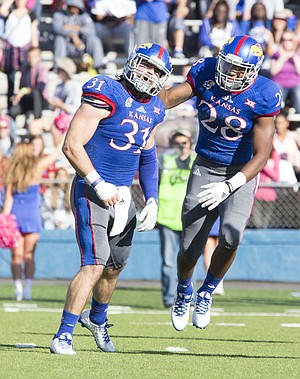 Blessed with a politician’s smile and Brian Urlacher’s ability to bring down ball carriers, Dineen has enjoyed making his final season about more than just stats and numbers.

“They’ve done a great job with that whole thing and I’m fortunate enough to be up for a few awards that can get voted on, so I thought it was a pretty cool idea,” Dineen recently said. “It (was) during the whole election season and stuff like that and I’d be lying if I said it wasn’t really fun. It’s pretty cool.”

The heart and soul of the Jayhawks if ever a single player was, Dineen is nearing the end of his days in crimson and blue and the Lawrence native who has become KU’s latest all-time great linebacker has just one game left in his college career.

A fifth-year senior from Free State High, Dineen has long been the voice and face of the struggling Kansas program. Most days, that’s been hard. But Dineen has never wavered.

Whether answering questions about a heartbreaking loss or trying to make sense of another embarrassing blowout, Dineen has been trotting into pre- and postgame media sessions for as long as I can remember. Heck, I can remember when he actually played running back as a true freshman in 2014.

Speaking of 2014, that was the one season that Dineen and former KU linebacker Ben Heeney, whose image is plastered on the outside of the north wall of Memorial Stadium, actually played together.

No one would have thought it then, but the few current Jayhawks old enough to have played with both of them have no problem comparing the two today.

“Absolutely,” said senior long snapper John Wirtel. “They’re very, very similar. Their leadership, their speed and their play-making ability. They are. I tell Joe all the time how much alike they are. The way they lead and how they lead by example, on and off the field, they’re just great ambassadors for the university.”

Asked if back then Wirtel thought he would ever say that about another football player, the long snapper did not hesitate to answer.

“Never,” Wirtel said. “No. I mean, Ben was amazing and I still recall so many big games he had and I just knew this guy was the real deal. And then Joe comes along and it’s just, just... they’re eerily similar in how they are and how they act. They’re both big time players.”

They also both served as the inspiration for their own KU marketing campaigns that highlighted their play.

Dineen’s “Vote Dineen” endeavor and Heeney’s “Captain Heeney” comic book creation will go down as two of the more memorable KU football projects designed for a couple of players who were 100 percent worthy of the attention and praise.

So which was better? Dineen’s political dabbling or Heeney’s comic book persona?

“You tell me now,” said a very political-sounding Dineen, hinting that technology had come a long way since the Heeney days.

Kansas kids who bleed KU blue and won’t soon be forgotten, Dineen and Heeney proved, perhaps better than any two players in the past decade that playing hard and putting up huge numbers has nothing to do with a team’s win-loss record.

Godspeed, Joe. And thank you for not only sticking with KU during a very trying time, but excelling. It's been a true pleasure watching your work.

Dineen is currently 4th in FBS total tackles, but what is ridiculous is he is first in solo tackles by about 20. Dude has 97 solo tackles on the season! I think a fitting tribute would be for the KU offense to keep him off the field as much as possible against UT. Even so, Joe will still likely add around 15 stops to his already impressive total and career.

Many thanks to Joe Dineen for a great career at Kansas. Today's game was not his finest however, as he dropped an interception thrown right to him... and then got bulldozed over by the Texas QB on a QB draw on 3rd and goal from the 6 yard line... for Texas 3rd TD of the game. All the same.. thanks for a great career at Kansas and for your never quit attitude, Joe Dineen!