Some of the most important players on the Kansas football roster will be playing their final game for the Jayhawks this Black Friday.

So why not let them take KU as far as they can one last time?

A strong defensive performance will be of paramount importance in the Jayhawks’ upset bid — Las Vegas oddsmakers favor Texas by roughly 16 points. And that’s the side of the ball where this team’s leaders operate.

Redshirt seniors Daniel Wise and Joe Dineen are the types of talents capable of not only embracing the moment but delivering critical plays and inspiring their teammates to match their intensity.

Along with the two captains, KU’s defense has seniors KeyShaun Simmons, J.J. Holmes, Brian Lipscomb, Keith Loneker Jr., Shak Taylor and others in its ranks.

Offensively, this will be quarterback Peyton Bender’s finale. He hasn’t been perfect the past two weeks, but his completion percentages have improved — 61.8 percent at Kansas State and 70.4 percent at Oklahoma. A steady, turnover-free game from Bender would go a long way toward making this one competitive.

And the senior QB would like nothing better than setting up senior receivers Steven Sims Jr. and Jeremiah Booker for big performances.

These past three weeks haven’t been easy for the Jayhawks or their coaches, since David Beaty was informed he wouldn’t be retained as head coach beyond the season’s conclusion.

There are players in the program that care greatly about their outgoing coach, Beaty, as well as his assistants.

Between that and it being Senior Day and the season finale, and returning players perhaps looking to impress incoming head coach Les Miles, there will be no shortage of motivating factors at play.

Whether individual Jayhawks are able to channel all of those appropriately — or tune them out if need be — just might determine how effective they play and whether KU’s game plan can work.

Will the Jayhawks rally around Beaty or the idea of giving KU’s seniors one last memorable victory?

They can’t let their emotions get the best of them, because the Longhorns figure to play inspired, too, with a win securing them a spot in the Big 12 Championship Game.

3. Try to do what other UT foes haven’t

We all know by now that one of the strengths of the KU defense this season has been its ability to create turnovers. With 14 interceptions on the season, the Jayhawks enter their finale tied for 13th in the nation for most picks.

But can they steal any of Texas quarterback Sam Ehlinger’s passes out of the air? Not many defenders have.

The Longhorns’ sophomore QB has thrown a program- and Big 12-record 295 consecutive passes without having one intercepted. A defender hasn’t picked off Ehlinger since his final attempt against Maryland back on Sept. 1, the season opener. In the 10 games since, his reads and decisions have resulted in zero interceptions thrown and an 8-2 record for Texas in that stretch.

Though Ehlinger aggravated a shoulder injury against Iowa State this past Saturday and only played in the first half, he was able to practice this week and UT coach Tom Herman said he expects his No. 1 QB to play. 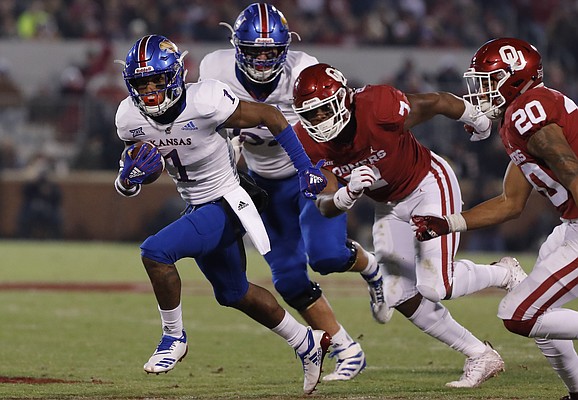 Kansas running back Pooka Williams Jr. (1) runs ahead of Oklahoma defenders during the first half of an NCAA college football game in Norman, Okla., Saturday, Nov. 17, 2018. (AP Photo/Alonzo Adams) by Associated Press

KU’s magical freshman running back from Louisiana, Pooka Williams is the one man on the roster capable of completely changing a game with his skills.

The Jayhawks’ trip to Oklahoma a week ago turned out relatively competitive because the Sooners had no answer for Williams, the 5-foot-10, 170-pound true freshman. Now, in order to compete with the Longhorns, they’ll have to successfully unleash him again.

Beaty said the freshman running back has been extraordinary because the Jayhawks are able to use him in such a variety of ways.

“He’s got the best hands on our team — and there’ll be a lot of kids mad at me after this talk because of that. But he does,” Beaty said of Williams, who ranks second for KU with 32 receptions, behind Sims’ 48. “If you shake his hands, they belong on about a 6-5 guy and he’s not tall at all to be honest with you. Very unique. But he has got terrific hands. We put him out wide. He might be one of our better receivers. And he’s thrown a pass, he’s caught a pass, he’s ran the ball into the end zone for touchdowns (nine total).”

With 1,022 rushing yards on the season, Williams became just the 15th player in program history to hit the 1,000-yard mark and the first since James Sims in 2013.

“For a freshman to come in and do that, and he does it with some electrifying runs, man, I feel so fortunate to have been able to witness it, to be alongside him on this team,” Beaty said. “He’s only a better person than he is a player, which should speak volumes about what type of kid he is.”

KU has lost seven on its eight Big 12 games, but the vibe around Anderson Family Football Complex doesn’t match that of a typical last-place team.

Yes, the Jayhawks lost at Oklahoma last week. Nonetheless, the fact that the offense put up 40 points really seemed to encourage players on both sides of the ball.

Then there is the Les Miles effect. The new KU coach’s interaction with the players thus far has been limited to a five-minute introduction on Sunday. But the fact is his presence takes away some uncertainty about the program’s future.

Returning players already have something to be excited about for 2019 and the seniors want to go out with a victory. Positive vibes alone don’t win football games, but they certainly can’t hurt.

UT has something to play for, a conference title game.

Can't wait for the season to end and the recruiting to begin.

Rain in the forecast and the students away for break. Could be rough. Here’s hoping each Senior has a great day and a great game.

On the coaching front, I saw that Everet Withers was fired by Texas State. He might make a good DC candidate if Bowen is not retained. Great Texas recruiting ties and extensive DC experience at the pro and collegiate levels.

Here is hoping to send the loyal seniors out on a positive note. Unfortunately Texas will not be taking the Jayhawks lightly given they are playing for a chance to play OU again, so for Beaty and company to end the season with smiles, every break has to go Kansas’ way. I have been correct for all but one of KU’s games (Nichols) this year against the spread, but don’t expect this game to be close. A cold and rainy day might have slowed down a team from Texas, but with the forecast now being 50 and dry, not so much. Still hoping for an upset. Rock Chalk.

As a note OU needs to win today or WVU will play Texas. Of course if Kansas wins next week is OU and WVU again.

Texas’ run defense will probably shut down KU’s running game. What else we got?

If it is raining & cold, I am hoping that both teams take to the run. I hope we have better run game than theirs.

I like on Special Teams there is just a checkmark...no need to evaluate the KU or TX special teams, just that one of the teams has it, so it is checked. We don't know which team, just that it will be part of the game.