Imagine, for a minute, that you were Les Miles on Saturday night and found yourself in front of a television set around 6:30 p.m.

Wouldn’t you have flipped the tube to FOX to check out the Kansas football team’s second-to-last game of the season at Oklahoma?

Whether with his family somewhere in Chapel Hill, North Carolina, celebrating the first college touchdown pass in the career of his son, Manny Miles, or sitting alone in front of a 70-inch screen taking meticulous notes about a team that reports have indicated soon will be his, the former LSU coach no doubt had a memorable Saturday night.

With North Carolina playing in the afternoon, Manny provided the first highlight, a Hail Mary touchdown on the final play of the first half during UNC’s 49-26 Senior Day win over Western Carolina. The Jayhawks, perhaps to the surprise of many, provided a bunch more the rest of the night.

What Miles saw on Saturday night likely won’t mean much or still be on his mind by the time he leads Kansas onto the field to open the 2019 season, provided the reported deal does in fact become official. 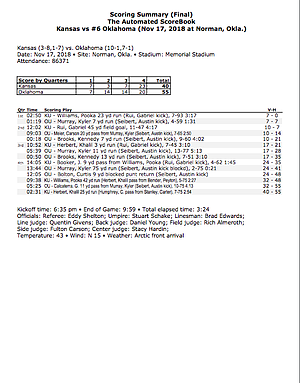 But first impressions are pretty powerful. And if Saturday’s 55-40 loss at No. 6 Oklahoma was the first time Miles watched a Kansas football game with definitive knowledge that he soon will be leading the program, a number of KU players and coaches left a mark.

Freshman phenom Pooka Williams, of course, was the most notable of the bunch. From gobbling up yardage (270 yards on 18 touches) and rushing for two touchdowns to flashing his toughness and throwing for another score, the Louisiana native showed beyond a shadow of a doubt that he was the second best player on the field on Saturday night.

No offense, Pooka, but that other guy wearing No. 1, in OU red, might be the best player in all of college football. And Kyler Murray’s team won.

If Miles was not aware of it before Saturday night, he went to bed knowing that his first official act as the Kansas football coach, should that be where KU’s search ends, has to be a little sit-down with Pooka. It’s not hard to imagine the two becoming fast friends.

But there were plenty of other players, underclassmen even, who also put some good things on film against the Sooners.

Khalil Herbert and Dom Williams ran hard in relief of Williams. And the rest of the team played hard to the end, happily embracing the opportunity to show they belonged on the same field with the 10-1 Sooners instead of hiding from it.

The Jayhawks (3-8 overall, 1-7 Big 12) weren’t anywhere close to perfect in this one. Remember, there’s a reason new KU Athletic Director Jeff Long has been looking for a new head coach. But they hit hard, played harder and demonstrated that there’s something there to build on.

At halftime, FOX studio analyst Robert Smith said in no uncertain terms that what he saw Saturday was a much improved Kansas football team over the one he watched lose to Oklahoma, 41-3, last season in Lawrence. 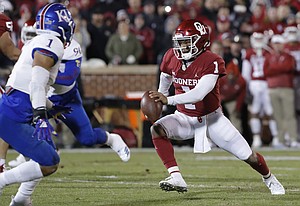 Play-by-play announcer Tim Brando, a close friend of Miles’ who gave the Miles-to-KU talk life via Twitter a couple of weeks ago, referenced Miles vaguely throughout Saturday’s broadcast and pushed the excitement meter up a notch or two near the end of the game.

With just a few minutes remaining and the outcome decided, Brando said there would be news, “more than likely (Sunday),” out of Lawrence and then went on to gush about Miles’ ability, how he could put together a quality staff and why he believed Miles could turn things around.

If Kansas football, which entered Saturday as a 35-point underdog to OU, easily can cover the spread and hang 40 points on the Sooners in the process, Les Miles can wear crimson and blue.

In Les we trust.

The MAD HATTER to the HILL!!!

If he wasn't watching Pooka with the rest of us, what could he have been watching?

According to flightaware.com there is a flight at 7:10 am from Raleigh-Durham to Topeka Regional landing at 9:21 am. Miles was at his son Manny’s senior day in Chapel Hill. Coincidence with the flight or is this one carrying precious $4 mil/year cargo?!

SI just confirmed that he's on his way.

I'd be more excited if Miles was brining an O-Line with him.

I agree with you, but on a night where Pooka ran for 252 yards, your timing isn't the greatest :-).

At least tonight they were pretty good. ESPN stats also shows OU had 0 sacks, 2 TFL and 2 QB hurries. That's a solid performance by the O-line

OLine has improved greatly from the beginning of the year. You don't run for 300 yards on Oklahoma without good OLine play

Matt I agree with most of your observations, but Pooka was the best player on the field. The yards after contact where amazing. He, Dom and Khalil flat out punished the defense of a 10 ten team playing for a spot in the final 4. Murray supposedly was playing against a really bad team if you listened to all the pregame crap spewd from all of the broadcasters, many who made fun of the Jawhawks. Loved the comments when one started to talk about an upset and was told don’t even go there. OU’s defense was not that impressive, clearly not a national contender, but they demonstrated the ability to take cheap shots. Regarding David Besty, the job of a leader is to leave the place better than you found it and he has clearly changed the terrible culture left by Weis. Those players continue to play hard for their lame duck coaches, even when predicted to be a 5 touchdown underdog. I hate moral victories, but greatly appreciated the effort of KU coaches and players on a national stage. Now focus the last week on beating Texas. Rock Chalk.

Disagree completely. Beaty is leaving the program in as bad as shape as when he came. Culture is meaningless. What is meaningful is having the building blocks in place to create winning teams.

Next year, we could be a pretty competitive team because of Beaty's sell-out to JUCOs and mismanagement of scholarships. I can write the Beaty-lover comments now: see, we were only one season away. The problems start the following year and Les Miles or someone else is going to be tasked with fixing the same problem that Beaty inherited.

On the plus side, we'll have the indoor practice facility, thank you David Booth, so Miles will have something to sell to recruits.

Miles is going to have to succeed where Beaty failed massively: building a staff and managing the roster. It sounds to me like Long is trying to build the infrastructure so that we can recruit, manage scholarships, manage redshirts and actually build a program - not toss hail mary's with JUCO recruits.

Beaty has $3 million coming to him, so he'll make half-a-million dollars per win that he had at KU, after he's left KU. Pretty neat deal.

Coach Beaty did one great thing. He hired Tony Hull. Hull brought recruits from La, and that has led to Les Miles, who should put that recruiting on steroids. Score...+1.