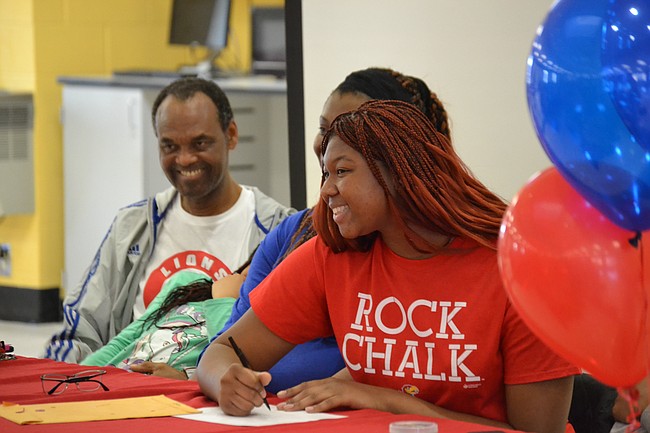 Not long before the start of her final preps season, Lawrence High senior Chisom Ajekwu made her collegiate plans official.

After announcing her verbal commitment in March, Ajekwu on Friday signed her national letter of intent to play collegiate basketball for the University of Kansas. The 6-foot-3 center was keen on the idea of staying in Lawrence as she continues her basketball career.

“It is very exciting,” Ajekwu said. “I’ve been waiting for a very long time. Making it official now is finally a relief.”

But Ajekwu has had her eyes set on playing at the next level since she picked up the sport.

Ajekwu, who started playing basketball in the sixth grade, started getting attention from colleges one year later. Ajekwu earned her first offer in the summer before her sophomore season, as she garnered attention from Wichita State and Kansas.

“I talked to coaches and watched a lot of other games from other schools,” Ajekwu said. “Just watching KU, I get more of the family-type vibe from them. Their program, and their coaches, just fits me. There is nothing that compares.”

Ajekwu first met Kansas coach Brandon Schneider during her freshman season when the Lions played in KU’s team camp, though she entertained other programs during her recruiting process.

As a junior, Ajekwu earned second-team all-Sunflower League honors, averaging a double-double with 11.9 points and 10.3 rebounds. She helped the Lions to a 17-5 record, a program that has gone 35-10 over the last two seasons.

Ajekwu became the seventh Jayhawk from Lawrence in the program's history. She's ranked No. 23 for her position and No. 117 overall by ESPN.

“I knew I wanted to play college basketball,” Ajekwu said. “My parents kept pushing me to do it. I didn’t really start that young, and I just learned to love it. Now it is everything to me.”

Prater is No. 73 overall in this year's signing class by Blue Star Basketball Report. As a junior, Prater averaged 21.4 points per game and reached 1,000 career points. She set the record for most points in a game after scoring 40 against Staley.

Davis is ranked No. 44 overall by ASGR Girls Basketball Report, and Kersgieter was KU's first commit in the 2019 signing class.

"We graduate seven seniors, so this has been an extremely important recruiting year for Kansas women's basketball," Schneider said in a team release. "We feel that each one of these signees bring unique talents and attributes to our team. They are all high character and hardworking young women, who are excited about our vision and will positively contribute to the culture and chemistry of our program."