KU soccer set to take on UNC in Round of 32 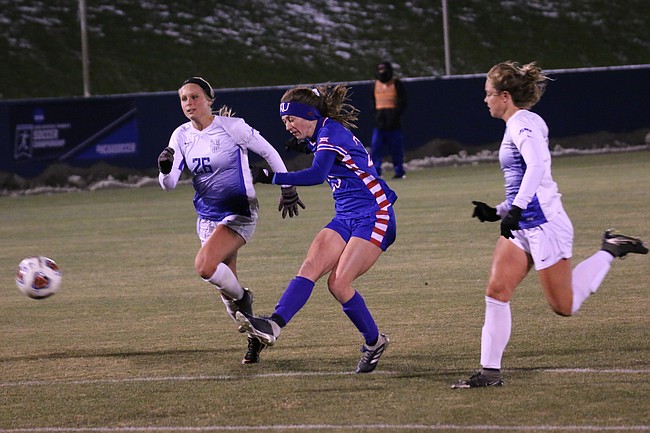 After a thrilling double overtime win over Saint Louis, the University of Kansas women’s soccer team will look to keep things rolling in the NCAA tournament.

North Carolina (18-3-1, 10-0-0 ACC) enters Friday's match with just one loss in its last 14 outings. The Tar Heels claimed the ACC regular-season title, completing the league schedule undefeated and without a tie for the first time since 2006.

This season, the Jayhawks have only been shut out four times and scored multiple goals in eight of their matches. KU forwards Katie McClure and Grace Hagan have combined for 17 of the Jayhawks' 27 goals. McClure leads the way with 10 scores, while Hagan has seven. On defense, freshman goalkeeper Sarah Peters has collected 54 saves for a .740 save percentage.

Meanwhile, North Carolina has had a stellar season on the defensive end. The Tar Heels have allowed 11 goals in over 2,000 minutes of play, which includes seven shutouts in their last eight outings. Senior goalkeeper Samantha Leshnak has tallied 26 saves and six solo shutouts. ACC Offensive Player of the Year Alessia Russo leads the team with six goals.

The match will be streamed on ACC Network Extra.