Jayhawks struggle on offense in lopsided loss to Cyclones 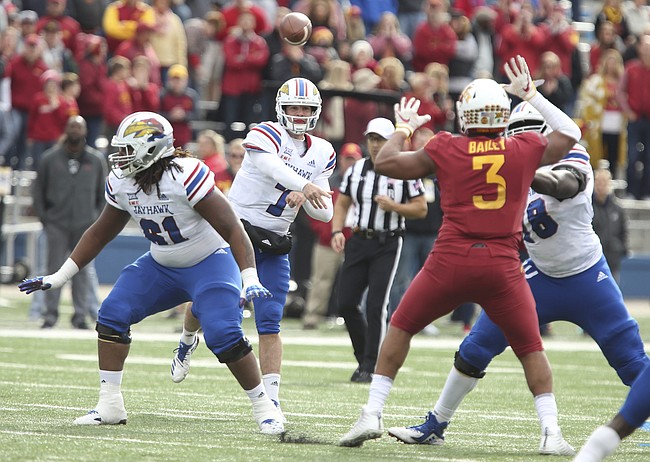 After notching its first conference win of the year, the University of Kansas football team could not build on that momentum against Iowa State.

ISU scored a pair of touchdowns in the first quarter, and KU never recovered during a 27-3 loss Saturday at David Booth Kansas Memorial Stadium. The Jayhawks (3-6, 1-5 Big 12) have now lost their last four meetings to the Cyclones (5-3, 4-2) following the lopsided defeat.

Freshman quarterback Brock Purdy helped Iowa State extend its win streak to four games by completing 16 of 23 passes for 263 yards and three scores. In the loss, Peyton Bender went 19-for-41 for 185 yards for the Jayhawks. 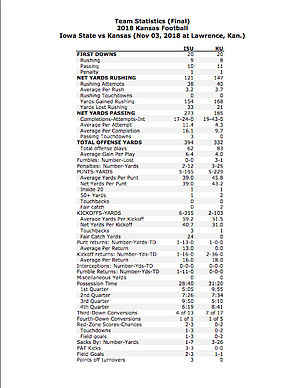 With 6:59 left in the first quarter, Butler found the end zone in emphatic fashion. Butler dusted Hasan Defense off the line, and created plenty of separation from any Kansas defender. Freshman quarterback Brock Purdy, however, underthrew the ball to make Butler come back for it.

Butler leaped over Defense to haul in the catch and then shoved off a tackle en route to a 51-yard touchdown reception to give the Cyclones the lead. It capped a 14-point opening period, in which Butler netted both scores to help the visitors take control out of the gate.

Iowa State led by at least two touchdowns for the remainder of the contest.

• Offensive highlight: This category should just be reserved for Pooka Williams every week.

The freshman running back has done it all for the Jayhawks since the second week of the season. In Saturday’s loss, Williams demonstrated his strength on a run in the third quarter. Williams, who is 170 pounds, ran over an Iowa State would-be tackler during an 11-yard run.

Pooka Williams, who is still very good at football, runs over an ISU defender #kufball pic.twitter.com/frcnr2pURV

Williams finished with 58 yards on 17 carries for the Jayhawks.

• Defensive highlight: Even though the score was lopsided by this point, Kansas kept Iowa State from extending its lead in the third quarter. 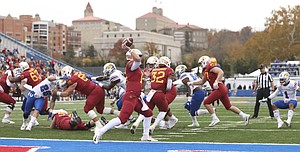 Trailing 27-3, Codey Cole brought down Purdy for a sack on third down to force a long field goal try. Connor Assalley’s attempt from 49 yards out sailed right, keeping the margin at 24 points with 2:45 left in the third period.

It ended a strong drive for the Cyclones, who used 12 plays and 6:18 to march into the Jayhawks’ territory.

Trailing 14-0, Kansas put together a solid drive on its third possession in attempt to trim the deficit to one score. Stephen Robinson Jr. dropped a potential touchdown pass from Bender. Moments later, Bender threaded a pass through ISU’s defense on a post pattern to Jeremiah Booker in the end zone. Booker was unable to come down with the catch on fourth down, however.

Just two possessions later, Robinson fumbled on the opposition’s 24-yard line, ending another promising drive by the Jayhawks. The Cyclones answered with a field goal to take a 20-0 advantage.

From the AP writer on CBS: his team looked woefully unprepared Saturday. Substitution mistakes, four failed fourth downs and a myriad of other issues made for an ugly showing in front of a sparse crowd made up of about 50 percent Iowa State fans.

I didn't see the game (thank God) but it sounds like Beaty once again proved why he is the worst coach in the country.

Bender can’t be blamed for hitting receivers in the hands on two consecutive touchdown passes.

Nevertheless, our A.D. needs to put us out of our misery while there still time to get recruits for next year.

Both comments are right on, though maybe it's Bender's passes and not the receivers hands because the ISU safety couldn't catch one thrown right to the numbers either :)

As a poster pointed out in another thread, Maryland is now in the market. I listened to a Cleveland Brown's beat reporter say that Matt Campbell is on their short list. Better jobs will soon be available, I hope that Long has this thing already sorted out and salted away, and he's just waiting for the right time to make the announcement.

Many of us Jayhawk fans hated it when Willis transferred out. But, Willis clearly made the right decision for his Collegiate Football career. Beaty clearly does NOT know how to run an offense. And, if B. Purdy had signed with Kansas, he probably wouldn't have even seen the field this year. Beaty can not coach QB's.

The Twitterverse says Beaty has been canned, to be announced in next 24 hours.

I'm hearing the same we should hear by tomorrow afternoon.

Listening to beatys post game. Rerun of same comments as first game of season. How many games do we have to play before we get it right?

Apparently four years of bad games. Then the coach is fired. Rinse and repeat.

Iowa State had 390 yards of total offense. KU had 330. Just 60 yards total, yet the lopsided score. After the face mask by Iowa State gave us a first and goal from the 2 1/2 yard line, we proceeded to throw 3 passes in a row, then run on 4th. That was just another reason, to add to the other 50+ reasons over the last several years that cemented Beatys fate. The kids deserve better.

Exclusive of the 83 yard td, the defense did it’s job. If the offense had competent coaching and execution this should have been a close game.

If we had a qb the quality of any team we have played, we would have won more games, but Bender does not go through his reads. He locks on one receiver which is why pooka can’t get the ball in the open field!

I wouldn't say happy days. We still have to hire a competent coach. This has proven to be shockingly difficult for us.

Hopefully we give these hardworking kids a decent chance now.

Very true, but l feel they HAVE to get it right this time with realignment possibly coming up soon and they want to have a place to go if Big 12 breaks up.

We are experts at firing football coaches. Not so good at hiring.

Honestly, it is a sad day for all involved. But, it is time for the end of the Beaty Era. I was very hopeful that Beaty would work out as the Head Coach. I wanted Clint Bowen to be hired. But, he wasn't and Beaty was. I supported Beaty from day one. But, this is the year that the fans should've been seeing at least a .500 regular season record. Before today's game, I didn't think that Kansas would have a chance to win this game. But, today's game was a very winnable game. K-State game next week is a winnable game. Then, OU and Texas are left. And, I will be looking forward to seeing who A.D. Long hires next, and trying to be optimistic about the next coaching tenure.