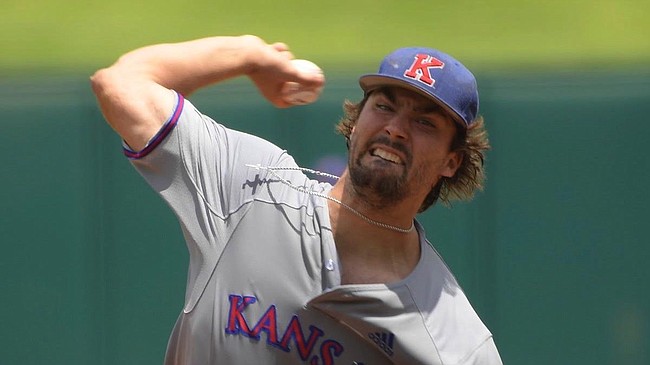 Oklahoma City — When a No. 8 seed defeats the regular-season champion in any conference tournament, it’s called an upset. Yet, it doesn’t really feel like one when Kansas, the No. 8 seed, sends one of its co-aces to the mound.

No hitter, no lineup, looks like Goliath to either junior Jackson Goddard or sophomore Ryan Zeferjahn.

Goddard again showed that Wednesday afternoon, throwing gas past the talented Texas hitters in a Big 12 tournament opener, and Kansas did enough other things right to prevail, 3-2, at Chickasaw Bricktown Ballpark in Oklahoma City, Okla.

Goddard, who missed six weeks of the season with a strained abdominal muscle, lasted two outs into the seventh; allowed two hits, one run and two walks; and struck out seven.

“I’m on record as saying we can beat anybody in the country in the first two games of a series when they’re healthy,” Kansas coach Ritch Price said of Goddard and Zeferjahn, who starts for the game set for 4 p.m. Thursday against Baylor. “I was glad that Jackson Goddard, on this stage, had a chance to show how special he is. ... He made big pitches when he had to against really dangerous hitters who have been red-hot.”

Goddard fanned Big 12 player of the year Kody Clemens (0 for 4), son of 354-game winner Roger Clemens, twice, on five pitches in the second and on three in the sixth, in his second consecutive dominant performance. Goddard struck out 11 Oklahoma batters in his previous start.

No point in thinking about it now, but it’s difficult not to when watching the highly regarded pitching prospect dominate: How differently might this season have gone had Goddard not suffered the injury?

It prevented him from pitching in KU’s conference-opening series in March in Austin, so this was the Longhorns’ first shot at him this season. The teams met last season with Goddard on the mound in the Big 12 tournament, and the Longhorns prevailed, 5-4. His chance to settle the score was delayed and he capitalized on it.

“Pitching in Austin is something you look forward to when you come to the University of Kansas,” said Goddard, a native of Tulsa. “It’s the best atmosphere in the Big 12 to pitch in, so it was hard sitting back watching that, but it was fun to pitch against a really good lineup today.”

He struck out four of the first six batters he faced and didn’t allow a hit until David Hamilton led off the fourth with a single to center.

Goddard did his most uneven and then most important work of the steamy afternoon all in one inning, the fifth.

He took a 2-0 lead into the fifth and temporarily lost the command of his pitches that made him sail through the first four innings. He walked the first batter, hit the next and D.J. Petrinsky singled in a run, leaving Goddard with a pair of runners on and nobody out. Bunt-popout, strikeout, line drive to left that stayed in the air long enough for Devin Foyle to snag it.

Foyle, from Fountain Hills, Ariz., had a productive day with the bat by both not swinging it and swinging it.

A switch-hitter, he appears so comfortable at the plate. He has the look of someone who just as soon would stay there all day. He doesn’t fidget. He just locks in on the pitcher’s hand and does a nice job of recognizing pitch types and locations early. He’s not going to make it easy on pitchers by offering at a lot of pitches out of the strike zone. He has walked 23 times and struck out 30 in 199 at-bats.

Texas retired him just once in four plate appearances. He walked twice and hit his 10th home run, to left field, putting Kansas up, 3-1, a much needed insurance run as it turned out.

Nice numbers, but they didn’t earn him All-Big 12 honors on either the first or second team.

“My guy over here, Devin Foyle, took offense to the all-league balloting here a little this week,” Price said. “He hit .340, didn’t make an error the entire season and hit nine home runs. I think he showed some people that some people made some mistakes on those ballots. He’s been one of the best players at the University of Kansas during my tenure. So it was great to see that young man clutch up today.”

“I was more motivated to prove them wrong, wanted to come out and show what I can do,” he said.

Goddard and Foyle played the main roles Wednesday, but others made sure their efforts were not in vain.

Foyle led off the fourth with a walk and scored on Brendt Citta’s double to left, and then situational from back-to-back hitters brought Citta home to give KU a 2-0 lead. Brett Vosik moved Citta to third with a grounder to the first baseman and after Owen Taylor walked, Skyler Messinger brought Citta him by lofting a sacrifice fly to center.

Tyler Davis needed just seven pitches to contribute a scoreless inning of relief. Taylor Turski pitched two-thirds of an inning and left with a runner on first and one out in the ninth, handing the game over to Ryan Cyr. He walked Zach Zubia and allowed a two-out, run-scoring single to Ryan Reynolds to cut KU’s lead to 3-2.

That brought Petrinksy to the plate with runners on the corners. Cyr induced a short-to-second force to secure the victory and send Kansas (27-28) into the winner’s bracket and Texas (37-20) into the losers' bracket to face Oklahoma at 9 a.m. Thursday.

Price always seems to get his team together at the end of the season and sometimes produces better than average results in the Big 12 Tournament.

Still doesn't change 3 NCAA tournament appearances in 16 years and that he needs to be fired and replaced.

Realistically, do you really think anyone can do much better at a cold-weather school with no baseball tradition when competing with places where they have much better weather and a long history of success?

I'm not saying KU will ever be regular in the College World Series, but there's also no reason why KU shouldn't make the tournament about 60% of the time.

The Big 12 has 9 programs in baseball, and regularly sends 5-6 teams to the NCAA tournament, there's no reason KU should make the tournament over half the time with an occasional Super Regional appearance mixed in.

I watched the game on the Oklahoma website on Direct TV 675. Tom did a super job explaining what happened. The only thing he missed was the last bat of Cody Clemens he hit a drive to centerfield that was caught close to the fence 400 yards. I agree that Goddard pitched a great game. And the home run by Foyle was close to the foul line.

The first rule of baseball: great pitching almost always beats great hitting. Nice win for the team, and losing their ace for the heart of the season clearly hurt.

The bar for cold-weather schools and schools like Kansas with virtually no recruiting base should be set fairly. If I'm an AD, I put together a list of what might be called peer schools for each sport from around the country and see how our results compare.

In most sports that KU offers, a primary goal should be to finish in the top-half of the division of the conference - regularly. In three sports; men's basketball, women's basketball and football, the bar should be higher because all three sports offer full-roster scholarship allotments, where many of the non-revenue sports do not. If you have enough scholarship to fully stock a team, then you need to not make excuses and figure out how to compete as a recruiter and coach. That's the job. It's well paid. Get it done.

My concern is many of the players seemed to be entitled and do not hustle. THAT MUST change. Use Bill Self as an example on no one being entitled to their playing time or position.

At KU there are many things to draw a kid other than the warm climate year round. Local recruiting has not been good with this staff. That is my major complaint. Quit chasing kids in Callie and get the best local kids first and then go for a plum or two elsewhere.