During his first season competing at the Big 12 level, Hasan Defense didn’t master the art of cornerback.

As one would expect out of a sophomore transfer from the junior college level, Defense’s transition to FBS play came complete with both mistakes and growth.

As the self-assured, 5-foot-11 corner prepares for his upcoming junior year, though, Defense feels optimistic he can free himself of the blown coverages, penalties and other errors that spoiled his debut fall with the Jayhawks.

This off-season, upon reviewing his 10 starts in 2017, which included a team-best nine pass breakups and a pair of interceptions, the former Kilgore College (Texas) defensive back encountered a bit of a personal revelation regarding playing cornerback in the Big 12.

“It’s not as hard as it looks,” Defense began, flashing his gold grill as he smiled.

The Jacksonville, Fla., native went on to explain how his approach to the game has matured since his prep days, when suiting up was primarily about having fun. 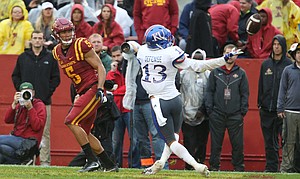 Now Defense understands playing on Saturdays won’t bring much personal enjoyment if he’s not prepared. In the months since the season ended he acquired a new appreciation for studying footage and discovering the simplest ways to mend his slip-ups.

Now in his second year at KU, Defense described how the game seemed to slow down for him the more he examined video. That proved especially helpful throughout the spring.

“It’s like watching a TV show. Every day we watch it,” Defense said. “They film practice, you get home, you watch it. You watch it once or twice, watch the whole thing, and it’s like, ‘All right.’ There’s only so much you can do, first of all. After a while you see that.”

For Defense, refining his game this off-season became more about paying attention to the basics than attempting some kind of massive overhaul.

His method seemed effective during spring practices. Head coach David Beaty said the junior cornerback kept showing up around the ball, maybe more than any other player on KU’s defense.

“I’m not sure I would have picked that, to be honest with you,” Beaty said of his expectations for Defense entering spring, “but I would say he would be one of my top three or four choices of most improved players we've got coming in to this point.”

The fourth-year Kansas coach felt upbeat about the team’s cornerbacks as a whole during the spring, because he knew it was a position group in need of improvement. Beaty at various points recently sang the praises of Defense, freshman Corione Harris, junior Kyle Mayberry and senior Shak Taylor, too, while crediting defensive coordinator Clint Bowen, who moved from safeties to cornerbacks coach this year, for fostering the upswing.

The overriding lesson pushing Defense’s advancement just might be his new grasp for the nitty-gritty of playing cornerback. He now comprehends the rules he must follow while lining up in or against certain formations.

We drastically need him to improve, hopefully he does.

We drastically need EVERY POSITION to improve DRAMATICALLY, hopefully they do.

Positive works much better than negative. So this article points out how defense can improve. Truthfully there is potential for improvement great if it happens.

“It’s not as hard as it looks,” Defense began

I hate the fact that I'm so beaten down by this program, I'm just so sick of losing that I'm gonna enjoy the Stanley Cup playoffs as long as I possibly can and just hope for the best and prepare for the worst. It has to get better, right?

Luckily, Defense was a three-year JUCO, hopefully he can only get better his final two years. If we had had experienced DBs last season, our defense would have immeasurably better during the early pre-conference and Big 12 games.

Actually Mike Lee was a returning starter & Torneden had playing time in 2016. Experience was not the problem. It was coaching. Michigan returned zero starters in their secondary yet finished 3rd in total defense. KU returned Mike Lee (& Torneden) and Dineen, & D Wise & Dorance and still finished 117th in total defense- the worst of all P5 teams.

Try again with a better excuse for abysmal coaching.

We lost 4 of 5 starting DB's from the previous year.

Even more ridiculous is to compare the Michigan reserves with ours.

Why is it ridiculous to compare KU with Michigan? They had a HC in his 3rd year. They are a P5 school and they too have not won their conference in over a decade. They had 0 returning starters in their secondary.

Stop making excuses for a 117th ranked defense. Michigan finished 3rd. Why could we not finish in the top-80 with 3 all-conference perforners??? Inferior DC that's why.

We also had an offense that couldn't stay on the field, which puts an enormous amount of pressure on the defense. I'd be interested in seeing where our offense ranked in "3 and outs."

The problem here is is that some of these Jucos that are being recruited to Kansas just aren't ready play. We hear this from people like Bryson that Jucos players are more ready than hs recruits and have more experience and they're better than high schoolers because they already have the development in junior college and you can see that a lot of the juco's at Beaty brought in have little to no impact and it was reported earlier in an article that some of these jucos never even saw the field last year. The other problem is with a shortened timeframe that these kids have less time if they don't play on the field one year that means I only have 1 year left possibly two.

Defense was so particularly badly last year he was awful he couldn't cover a cold. And maybe there wasn't anybody else to send out but if we're hearing that the juco's are more prepared than high schoolers then they should come in ready to play and not say stupid things like "it's not as hard as it looks" Especially after the season that Hasan (NO) Defense had.

You missed the fact that the previously recruited HS DB's though as old as Hasan didn't keep him from starting. Also missed the line about "leading the team ..."

He was essentially a sophomore. Do you really expect a lot out of sophs's?

Reminds me of Stewart. He was a JC that came in with 3 years to play, and had trouble his first year in particular. By the end, he was part of a solid group, though the team obviously never put it all together.