Notebook: Repetitions ‘fairly even’ for Kansas QBs this spring

As University of Kansas football coaches evaluated their quarterbacks throughout the spring, each of the three Jayhawks vying for the starting job received equitable chances to make his case.

Neither senior Peyton Bender, redshirt junior Carter Stanley nor sophomore transfer Miles Kendrick took the lion’s share of the snaps over the course of 15 off-season practices.

In fact, Bender disclosed, offensive coordinator and quarterbacks coach Doug Meacham mixed all three of them in at various times with different personnel.

“There’s no set distribution. Coach Meacham pretty much controls the rep count and who’s going in when and all that. It’s been fairly even,” Bender said. “We’ve all had opportunities to run with the ones (first string). But there’s no set schedule on who’s going to get the reps and that sort of thing.”

KU entered and exited the spring with its starting quarterback situation unresolved.

In 2017, Bender connected on 54.2 percent of his 273 passes, with 10 TDs and 10 interceptions. Stanley completed 54.6 percent of his 185 throws, with four touchdowns and seven picks. An under-the-radar junior college QB at College of San Mateo (Calif.), Kendrick finished with 1,889 passing yards, a 57.9 percent success rate, 18 touchdowns and nine interceptions, as well as 417 rushing yards and five touchdown carries.

Bender described one scenario this spring that would alter snap counts for the QBs.

“You know, if you’re not having a good day they might pull you out and put another guy in,” Bender said. “It really just depends on various factors.”

Though requested several times for an interview, Meacham was not made available by the KU communications staff to field questions this spring.

Trying to replace a 4th-round pick

From a talent and depth standpoint, the KU defense endured a blow this off-season when defensive end Dorance Armstrong Jr. decided to leave the program a year early to enter the NFL Draft. 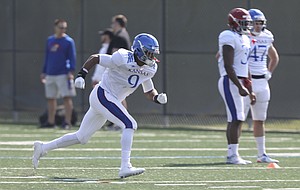 Kansas defensive lineman Najee Stevens-McKenzie takes off during a drill on Tuesday, April 10, 2018.

The Jayhawks’ defensive linemen did their best this spring to withstand the loss of Armstrong, who became a fourth-round pick of the Dallas Cowboys.

“It’s been going well,” Daniel Wise said of life without his former teammate, Armstrong. “We have guys like KeyShaun (Simmons), who’s been here since last year, so he’s stepped up a lot. Codey Cole’s one of the new guys, he’s been showing a tremendous amount of effort and a lot of talent.”

“All those guys have really stepped up and tried to learn the system,” Wise said, “putting all they have into really trying to make this defense better.”

Further reinforcements should arrive this summer, when Class of 2018 additions Azur Kamara and Jelani Brown — both junior college transfers — officially join the program. The incoming class also included the aforementioned Cole and Stevens-McKenzie, as well as Foster Dixson, giving the defensive line five new juniors for the coming season.

Stevens-McKenzie, Kamara and Dixson are listed as D-ends.

What Dallas should expect out of Armstrong

Now that Armstrong has moved on and become a Cowboy, many of his former teammates expect continued success for the defensive end from Houston.

Redshirt senior linebacker Joe Dineen thought Dallas “got a steal” when the organization picked up Armstrong in the fourth round.

“I’m surprised someone waited that long to take him,” Dineen added. “I think he’s gonna go in there and surprise a lot of people with his work ethic and I think he’s just gonna make a ton of plays for them. We saw what he did here, but he belongs at that level. He’s gonna do just fine.”

Dineen described Armstrong as one of the hardest-working Jayhawks, lauding him for his approach in the weight room. 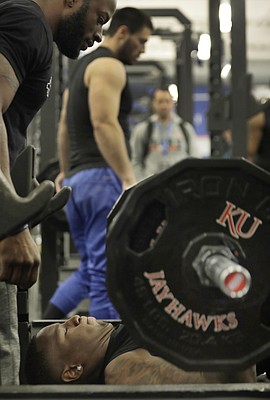 Someday, we'll have an incumbent starting QB during spring practice. I can dream, can't I?

Hopefully someday we'll have a QB completing more than 60% of his passes. Hopefully not dreaming too much.

I know everyone loves to blame Bowen but I've never thought a bad defense was the real reason for KU's misery. Hell nobody besides Kstate, maybe TCU really has a good defense in the BIG 12. You're allowed to have bad defenses in the Big 12 but when your offense sucks, that's the problem. Even the best teams in our conference give up 30-40 points regularly, thing is they can score just as much as they give up. KU goes three and out and then our defense is tired and gets gashed even worse. A sustainable offense should fix a lot of problems in my opinion.

KU gave up 45 per game. And yes, Bowen does duck as a DC. His game plans suck, his play calling sucks, he just sucks as a DC. Nobody is asking KU to be a top 10 defense, but top 75 would be enough to be competitive. That's asking way too much out of someone who has almostalways been in the bottom 10 nationally in total and scoring defense every year he's been in charge of the defense.

Repitions are key...under Beaty the Wins split them so much none of them get enough to improve. Same scenario as the past three years under Beaty.

This is an area that, at least, we don't have to listen to the apologists. Beaty has mismanaged this position worse than Chris Weber manages late-game timeouts.

In year four, at the most important position on the field, Beaty has chased off two incumbent starters, benched and then reinserted his third starter after recruiting over him, and tried to recruit over both of them with another JUCO hail mary.

I don't believe you could find a single person with confidence in Beaty's ability manage this position. Get in his quarterback's heads? Check. Pick the wrong guy? Check. Play Kumbaya vs. talent? Check. Play high-school level espionage with your opponent? Check.

Want an early read if this season will be a disaster? Listen to see if Beaty pulls out his "we'll name the starter late so that the opponent doesn't have time to prepare" rap. This is a sure sign of a hard-headed coach who refuses to learn.

Our Quarterback regardless, he will be as good as his receivers take him, meaning, receivers MUST have catching support; catching some difficult passes since our O-Line can’t block well, (based on recent years)

Order of our importance (which is our weaknesses order (weakest to strongest): Our: O-Line<Receivers<QB

O-Line: Weakest: Small size wears down in a hurry amid continuance of the season (Heart of setting up our offensive grooves/rhythms) [Small Size of O-Line<Big D-Line]

Receivers: MUST have PROTECTION from O-line.

Quarterback: will have to play an A GAME or especially with a very weak O-line which makes our receivers weaker than advertised.