Kansas guard Malik Newman (14) swoops in for a bucket against Clemson forward Elijah Thomas (14) during the first half, Friday, March 23, 2018 at CenturyLink Center in Omaha, Neb.

After scoring a career-high 32 points to power Kansas to an 85-81 win over Duke in the Elite Eight, sophomore guard Malik Newman continued to solidify some of his recently-given nicknames — such as "Postseason Leek" and "Mr. March."

Newman, who was named the Most Outstanding Player of the Midwest Regional, takes great pride in his recent success. As the 6-foot-3 guard prepares for the Jayhawks' Final Four matchup against Villanova (approximately 7:49 p.m., Saturday), Newman shed some light on some of his top March Madness memories from his childhood.

One of Newman's favorite players, UConn standout Kemba Walker, made a name for himself at the end of the 2010-11 season. The Huskies had lost four out of their final five regular-season games before the eventual Charlotte Hornets star led UConn to Big East and NCAA tournament titles.

"Most definitely Kemba Walker. The year that they won it, he was definitely my favorite player in college," Newman said. "I love watching him play. I used to go watch his highlights like every day. I watched the same highlight probably every day." 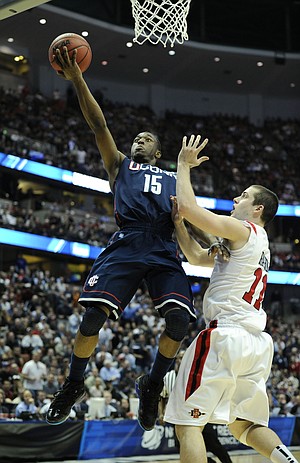 "Just what he did in the Big East tournament leading into the NCAA Tournament, leading those guys to the Final Four and to the championship that year, it was like he was a super hero."

Walker scored 23.5 points per game for the Huskies in the NCAA Tournament, after pouring in 26 per contest in the Big East tournament. Newman's postseason numbers have been nearly identical. The Kansas sophomore netted 24 points per game during the Jayhawks' Big 12 tournament run, and has scored 21.7 per game in the Big Dance.

"If we talk about individual performances, most definitely I think that's somebody that I look up to. I've got to meet him a couple of times and sat down and talked with him," Newman revealed. "If you ask Devonte' (Graham) about the performance that he had, I'm pretty sure that he would probably say that that's something that he would love to do. Anybody would love to do that. I most definitely want to be 'Postseason Kemba.'"

Newman doesn't check out Walker's highlights on a daily basis anymore, but he still enjoys watching clips of him and other star guards, such as Kyrie Irving and Damian Lillard.

"At the end of the day, I do want to be in the same shoes that those guys (are) in that I used to watch, because all of those guys are all successful right now," Newman said. "They're having a hell of a career. Hopefully the cycle continues."

A few NBA players reached out to Newman following his overtime heroics against Duke. Newman scored 13 of his 32 points in overtime, which was a tough pill to swallow for a couple of former Blue Devils.

"I've been getting a lot of comments and social media has been going crazy. Of course, you know I love when the fans comment and they're excited and things like that," Newman said. "Their comments really have made me smile. Rodney Hood, Quinn Cook, Emmanuel Mudiay — all of those guys — they hit me (up) and just told me to just keep playing. They enjoyed the game. Quinn Cook and Rodney (both of whom played at Duke) was kind of sad about it, but of course they was just happy to see me do well."

While Newman wants to continuing thriving under the bright lights, he's also happy to keep playing second fiddle to Graham.

"I'm most definitely still Robin. This is Devonte's team," Newman said. "We know that. He know that.

From Duke to Villanova: One memorable March Madness matchup leads to another

Graham has enjoyed watching Newman develop that consistency. Although Newman has scored 17 or more points in six of the last seven games, Graham said the big thing for the sophomore guard has been the desire to keep getting better.

"He's just carry that confidence over into practice, making shots," Graham said. "Coach is still trying to get him to make plays overall for himself and others and getting guys shots and talking more and just stuff like that."

The nickname "Postseason Leek" was one that Graham happily gave Newman. When posed with the same question of who he looked up to most when watching the NCAA Tournament as a kid, Graham had to agree with his backcourt teammate.

Graham and Newman both know that they'll have their hands full on Saturday with Villanova, who knocked off Kansas in the Elite Eight in 2016, en route to winning it all. Guards Jalen Brunson, Phil Booth and Mikal Bridges all played key roles in leading the Wildcats to the program's second national title.

Newman didn't want to cross the borderline of being confident and cocky going into Saturday's Final Four showdown with the Wildcats, but he believes that he will keep delivering in crunch time.

"As recent history shows, in win-or-go-home games, I've won my fair share of them," Newman said with a smile. "I'm just going to say that."

I've seen a lot of HS highlights of Newman. Lots of dunks, too. But haven't really seen him dunking in KU jersey, as I recall. He looked like Josh Selby back then. I want to see him dunk at least once in the remaining games (I have a feeling we're playing the NC game, too).