Kansas guard Malik Newman makes his way from the team bus as he and the rest of the team arrive at the team hotel on Wednesday, March 28, 2018 in San Antonio, Texas.

San Antonio — It sounded more like a home game than a hotel arrival.

With dozens of staff members and KU fans lined up in all corners of the San Antonio Marriott Riverwalk lobby on Wedndesday evening, the Jayhawks officially arrived at the Final Four.

With smiles on their faces and eyes wide open to take in everything that is Day 1 at the Final Four, the Jayhawks rolled off the bus one by one and made their way to their rooms. 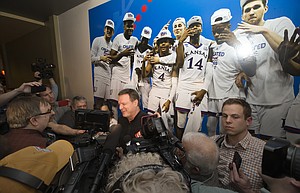 Kansas head coach Bill Self smiles as he talks with media members in front of a large photograph of the Jayhawks from after the teams' win over Duke in the Elite Eight game, Wednesday, March 28, 2018 at the team hotel in San Antonio.

If all goes well, the room numbers will be ones they remember forever.

But Kansas coach Bill Self said there was still a lot of work left to be done before his team can even entertain that thought. The good news, from Self's perspective is that the Jayhawks landed in San Antonio is about as positive a frame of mind as possible heading into the biggest weekend of their lives.

“I think it's good,” Self said of his team's focus. “Ask me on Friday and I'll probably know better. But today was good. Considering two days off, effort was good, attitude was good. But how can you have a bad attitude right now at this time of year?”

After their thrilling win over Duke in the Elite Eight last Sunday in Omaha, the Jayhawks were off completely on Monday and then went through a light walk through on Tuesday — Self stressed the word “walk” for emphasis when talking about it — and then practiced in full on Wednesday before boarding a plane in Topeka to head to San Antonio.

The top-seeded Jayhawks arrived a little before 6 p.m. and were scheduled to have a team dinner shortly after their arrival.

“After that,” Self said. “It's pretty much a business trip.”

There will be plenty of time for the players and coaching staff to soak up the total experience. After all, as those associated with the KU program know all too well, getting to this point does not happen every season.

Because of that, Self is hoping his team emphasizes two things heading into the rest of Final Four week.

No. 1 is physical health.

“I want our guys' minds fresh and our legs as fresh as they can be,” he said. “That's more important than anything else.”

No. 2 is operating with continued confidence.

“I think we have to,” said Self, when asked if he would continue to preach the 'Let it fly,' mantra he used heading into that Elite Eight matchup with Duke. “Now, when you say 'let it fly,' when a team plays zone, sometimes it's a lot easier. We're not going to get off 30 3s against Villanova. They're going to pressure out, they're going to make us play inside the arc. They do things different than what Duke did. But we have to have the mindset to go score fast and be in attack mode.”

While most of what Self was referencing in that remark has to do with on-court action after the ball is tipped off on Saturday night, at least a portion of the message was uttered with the idea of proper preparation in mind.

“I'm tired,” Self said. “And I know that if I'm tired then I guarantee the players are tired. It's a long season, it's stressful and it's hard to minimize (certain) things here. I think this is the most exhausting week for a player of any time this year. Look at the responsibilities that they have to do. So whenever you're not doing it, you need to be off your feet, you need to be asleep, listening to music and, of course, in our guys' case, probably studying.”

Self said navigating one's way through the inevitable annual distractions of the NCAA Tournament was always a challenge and was something that needed to be addressed before this year's tourney run even began two weeks ago in Wichita.

He's proud that his team has been able to do that successfully to this point, but reminded Wednesday night, “But they keep adding each week.”

“The one thing about all of us — you, me, everybody — everybody needs discipline, everybody thinks rules are good... for everybody else. Except for us,” he joked. “So we all have to buy in and certainly handle it the right way.”

Based on the way they have approached the first four rounds of this tournament — and the Big 12 tournament back in Kansas City, Mo., for that matter — there's no reason for Self to believe the Jayhawks will change their way of doing things now.

If anything, Self hopes the Jayhawks will be even more comfortable than they would at any other Final Four because of the great memories the program has from coming down here in 2008 and leaving with a pretty important trophy in tow.

That, of course, is the goal again this time around. And Self that just driving in from the airport to the hotel brought a lot of those wonderful memories rushing back.

You know, Lawrence is obviously my favorite (city),” Self said. “Wichita is good. Kansas City's good. Omaha, I love. But this is probably the best one right here. There's a lot of memories. … Great memories. But we've got to make new memories now.”

The Jayhawks are scheduled to practice Thursday and Friday at the Alamodome, with Friday's practice — from 1-1:50 p.m. — being an open practice.

Kansas, of course, will find other places to squeeze in walk-throughs, team meetings and practices in preparation for Saturday's 7:49 p.m. tipoff with Villanova throughout the rest of the week.

While it's a piece of cake for some parents to make the trip from their hometowns to San Antonio to watch their sons play in the Final Four, the journey is not quite as easy for other parents.

KU's roster features three such players whose families will have a tough time getting to San Antonio for this week's Final Four. But thanks to a new program put in place by the NCAA that helps cover travel arrangements and expenses for foreign-born players, that journey just got a lot easier.

Self on Wednesday provided an update on the status of the families of Silvio De Sousa, Svi Mykhailiuk and Udoka Azubuike.

Self said both De Sousa and Mykhailiuk's parents were making the trip from Angola and Ukraine and that the team was still hopeful that Azubuike's mom would be able to make it from Nigeria in time for Saturday's game.

“Dok's mother has to fly to some city in Nigeria to apply for her Visa tomorrow morning and if the interview goes good she'll be on a plane tomorrow night,” said Self, marveling at the idea of Azubiuke's mom's first in-person experience with her son's college basketball career coming at the 70,000-seat Alamodome. “So we're hopeful. And he lit up like a Christmas tree whenever he was talking to her and saw the reality that this could happen. I hope he's not disappointed because it will be disappointing after you kind of set him up to be excited. … It'll be a great experience for them.”

Bill Self on Jayhawks’ focus and status of international family members trying to attend Final Four by KUsports.com

What is Milak carrying in that Tupperware container? Good to see Charlie Moore who looks small compared to Garrett as well as the Lawson Brothers. I had wondered if the transfers were allowed to travel with the team. I'm always curious if the transfers when they travel, what they're allowed & not allowed to do. Would have been great if the Tom or Matt would pen an article on the transfers and how they get to interact during the season and post season. What are their moods like considering they don't get to play

1] Leftover sandwiches from the bus ride.

2] The left ears of our NCAA beaten opponents.

5] Water balloons waiting to be filled for the post title locker room celebration.

8] Printed out posts from Bryce Landon indicating that Malik was a disappointment.

9] Paper to be cut up for post game confetti celebration.

If any of my posts to this site served as fuel for these guys during this postseason run, then I'm glad I helped! ;)

I wonder if Devonte Graham can persuade HCBS to allow the team to wear the red uniforms against Villanova on Saturday night...

That's a good one! I don't think even Devonte has enough stroke to talk Coach into those red uniforms that he dislikes soooooo much.

Saw Larry Brown with the team. Always good to see him on the sidelines rooting for Kansas!

Never hurts to have another HOF coach by your side to consult. Larry Brown was there in 2008 and that worked out okay.

I have had tears every time I read that Azubuike's mom might be able to make the trip. I am a mom and can't imagine letting my son go at age 13 or 14 and not seeing him again for six years. I am praying she can arrive in time to see her son play. She will be so proud.