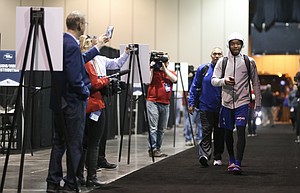 The NCAA tournament is all about different styles and matchups and an unfortunately Duke’s inside presences is a very bad matchup for KU. Andrew Wiggins had the quickest second jump I have seen, but he was more interested in not getting hurt his last game and being selected #1 than advancing in the tournament. Bagley and the Duke’s other one and done’s unfortunately for KU fans appear to have more interest in advancing than in their current NBA draft status. I have to admit I counted KU out on serveral occasions because they are too small, not deep enough, lack the lottery pick, etc. Here is hoping they continue to prove me and the national “experts” wrong and upset Duke (yes KU is the #1 seed but Duke is favored by all other metrics). Graham, Mykhailiuk, Newman, Vick, Azubuike, Garrett, Lightfoot, De Sousa, etc. please continue to prove the doubters wrong, and send Duke’s one and dones to the NBA early. Rock Chalk. Go, fight, win!

Tremendous coaching job by Self this year, perhaps his best. From here-on-out wins are the proverbial icing on the cake.

Block out! You too, Lagerald!

This is probably the end of the line for KU this season, but that's okay. Given the incredible limitations of the lineup and lack of depth, they definitely outperformed what they should have been. Kudos to the coaches and the 7 players who managed a Big 12 title, a Big 12 tournament title, and an Elite 8 bid. Next year, this team will be a force.

Sure KU and the devil both are top college bball. But as many of us already realized, looking at their rosters, it's like us, David vs them, Goliath. When we play with no-fear, will-to-win, make plays for others, and blessing from above, KU will persevere to go on to FF. Dooke also has flaws. HCBS and team will expose them. Go win it all, go Jayhawk!!!!!

We haven't played an inspired and really good game since the Big XII tourney. If we play our best game then, whatever happens, we can be proud. This is not a super Duke team.

If it were just about young talent, how do you explain what happened to UK?

We ate their lunch on the boards..

Marvin can now Pack his Baggage for the NBA.