10 reasons Kansas has what it takes to survive March Madness 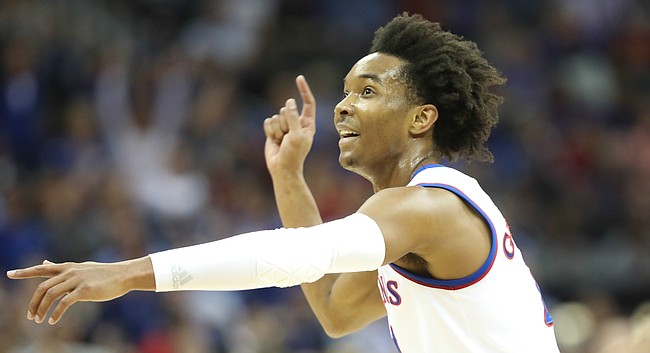 What becomes of the Jayhawks’ postseason run this season remains to be seen, but here are 10 reasons why KU fans can be optimistic about their team’s chances this March.

Analysts, coaches and fans alike will tell you that the key to winning big in the NCAA Tournament starts with having talented guards a team can trust.

Few programs, if any, are set up better than Kansas in that department entering this year’s tournament, where leading scorers Devonte’ Graham and Svi Mykhailiuk will look to lead the Jayhawks back to the Final Four.

Both have a ton of big game experience and a supporting cast in Malik Newman, Lagerald Vick and Marcus Garrett, that can bring a lot to the table on any given night.

Following in Frank Mason's footsteps could not have been easy. But Graham has made it look like a breeze.

Leading this team in every way imaginable, the senior from Raleigh, N.C., who twice was named the Big 12 player of the year last week, is one of the most experienced and talented players in this year's tournament.

He's the perfect blend of scorer and set-up man, passion and poise, and his teammates and coaches believe that as long as he's on the floor, the Jayhawks have a chance against anyone.

It might not be quite as sweet as last season, when KU had the Sweet 16 and Elite 8 in their backyard, but starting a tournament run with a couple of games that are played two hours from home is still a pretty nice way to tip things off.

Not only will the Jayhawks be able to maximize their ability to practice and hang close to home before heading off to the tourney, but the Wichita site also affords KU fans an easy journey to cheer on their team, giving Kansas a couple of virtual home games to open the tournament.

Whether you’re talking about his one trip at Tulsa, his one trip at Illinois or the seven times he’s done it at Kansas, Self, in 23 previous seasons as a head coach, has led his team to the Elite Eight or beyond nine times.

Beyond that, Self’s willingness to adjust on the fly, inspire his teams to find a way to grind it out, emphasize team defense and balanced offense puts Kansas in great shape to make a run year after year no matter what the roster looks like.

With KU’s four-guard lineup producing a team that ranks in the top 15 nationally in 3-point percentage (13th at 40.3 percent), the Jayhawks have found a way to put up points in bunches on a limited number of shots and can spread the outside shooting love around to five different players.

If big man Udoka Azubuike is limited, KU’s reliance on the outside shot becomes even more important. That, in some ways, could make this team even harder to guard.

The Jayhawks rank 13th in the nation in assists per game and are at their absolute best when everybody on the floor is moving the ball quickly and decisively in search of the most open shot they can find.

Graham, whose 7.5 assists per game rank sixth in the nation, keys the whole thing but Mykhailiuk is an underrated passer, Garrett is a terrific ball mover and Newman and Vick both are always ready to knock down open shots and understand the objective of getting teammates open.

No. 7 — Jayhawks know how to win close games

It's hard to envision a team being more ready for the grind and pressure of an NCAA Tournament run than Kansas.

Not only were most of their conference games dog fights to the end, but all of them were played with the pressure of trying to preserve the streak of consecutive conference titles resting on their backs.

For many of the reasons mentioned above — good guards, veteran leaders, clutch performers — the Jayhawks have had a knack for winning the close ones all season and that could serve them well in the next couple of weeks.

KU’s assistant athletic director for sports performance, Hudy works with the most cutting-edge equipment and knows how to keep the Jayhawks fresh, rested and rejuvenated throughout the season so their bodies are ready for the grind of March Madness.

Look at Graham and his 16 40-minute games this season as the obvious example of this.

It’s been a long time since the Jayhawks had a night off. From the start of conference play back in late December all the way through the Big 12 tournament in Kansas City, Mo., the Jayhawks have received the best possible shot from a conference ranked by many as the best in the nation, top to bottom.

And yet somehow the Jayhawks survived and won their 14th consecutive Big 12 regular season title. Survive and advance is the name of the game in March. And the Jayhawks just did that for more than two months.

It’s been a wild year in college basketball and, outside of Virginia and maybe Villanova, very few teams have played up to their potential on a consistent basis.

That’s what netted the Jayhawks one of the tournament's top seeds despite their seven losses and this season, more than any other, seems like one in which 15-20 different teams enter the NCAA Tournament with a legitimate shot of winning it all.

27 "experts" at ESPN selected their final 4 and tourney champions. Only one of them had Kansas in the Final Four: Jeff Goodman who picked KU to win the tourney.

A little chip on the shoulder never hurts.

1 could be seen as a reason against KU. We only have 1 pg. We have one of the best but we still only have 1.

8 and maybe some credit to #4 as well. Remember when Devonte was so susceptible to cramps? There has been none of that this year. I think I read that Devonte gave up sodas this year. All the phosphorus in the carbonation messes with the potassium levels in the cells leading to cramps. Huge hat tip to #4 for making a habit change that may have saved the season and already has been history making.

Worse seeds have the benefit of being expected to lose and being hyped when they win. Strong seeds can at best meet expectations.

Being a Jayhawk doesnt afford the benefit of being that flash in the pan - upset winner. We are expected to win and when we lose one of the 6 games in the NCAA, we are a disappointment.

Self routinely gets foolish questions like the one posed by the KC Star reporter who asked, "why does KU seem to fall short of expectations?" He should have answered, "because we are consistently good - and only good teams can really fail to meet expectations." Instead he answered graciously, as usual.

Well this time, this team I believe has over-achieved, with a couple of exceptions. I think anything past the Sweet 16 is gravy. We're fully capable of getting to the F4, i'll be cheering loud as anyone, but it will be hard.

Success in the NCAA tourney is not about who is the best team. It has a large luck component also. We have been victims of bad luck at times - having been clearly the better team but lost on a particular meeting. By the same token, why shouldn't we get lucky this year?

We've got enough talent, we just need a good break here or there.

Defense and rebounding are necessary to go all the way. Those are not this team’s strengths.

I think that Devante's success comes from being himself on the court and not trying to be Frank Mason.

I remember during Frank's junior year with Devante being the sophomore, that there were many who thought that Devante Graham would surpass Mason. They didn't overhype Devante, they underestimated Mason.