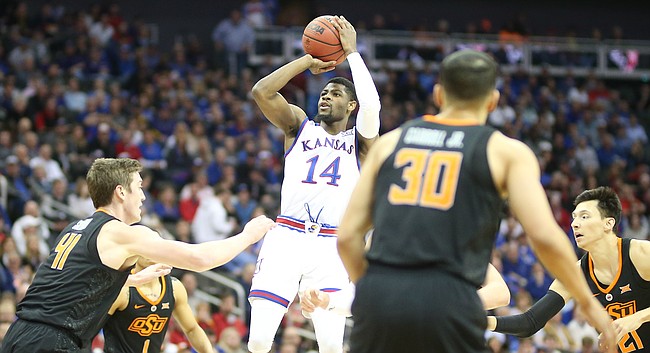 Kansas guard Malik Newman (14) pulls up for a three between several Oklahoma State players during the first half, Thursday, March 8, 2018 at Sprint Center in Kansas City, Mo.

KANSAS CITY, Mo. — Even without its all-Big 12 center, the top-seeded Kansas basketball team wasn’t about to fall to the same opponent for a third time this year.

Malik Newman scored a career-high 30 points and the trio of Devonte' Graham, Lagerald Vick and Svi Mykhailiuk added 34 more as the Jayhawks overcame a double-digit first-half deficit and avenged a pair of earlier losses against Oklahoma State, winning 82-68 to advance in the Big 12 tournament.

In the absence of Udoka Azubuike, the Jayhawks relied on Mitch Lightfoot and Silvio De Sousa (six points, eight rebounds) to play a heavier role. Lightfoot got the start and posted eight points and six rebounds — in addition to taking two charges — while De Sousa came off the bench less than five minutes into the contest and flashed his athleticism, throwing down a pair of athletic dunks in the first half. 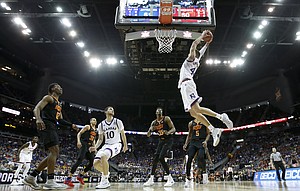 View a gallery of images from the Jayhawks' quarterfinal matchup in the Big 12 Tournament against the Cowboys.

The Jayhawks executed better on the defensive end than in either prior meeting against the Cowboys, at one point holding Oklahoma State scoreless for a near-eight-minute stretch while embarking on a 14-0 run.

• The game turned when: KU survived its first-half foul issues.

Without much of a bench to fall back on, the Jayhawks could’ve easily found themselves in a hole in the first half. As it were, they had already trailed by double-figures before both De Sousa and Lightfoot picked up their second fouls, leading to coach Bill Self putting in James Sosinski before the end of the period.

But thanks to a variety of performances, the Jayhawks not only held serve at the half, but actually led by a point. Newman scored 20 points in the first period, hitting 8 of 10 shots from the field and going 3 for 4 from 3-point range. De Sousa added four points and seven rebounds, while Mykhailiuk competed for a tough offensive rebound and put back to end the half on a high note for a KU team that had much, much more in store.

Lagerald Vick started the second half with an athletic baseline drive and dunk and added a tip-in off a Lightfoot miss moments later to put KU up six. The Jayhawks continued to push out their lead and even went ahead by double-figures, 61-50, as Devonte’ Graham swatted a shot on one end and pulled up for a 2-point jumper the other way.

Newman connected on his fourth 3-pointer down the stretch for the Jayhawks, who set a new program-record for most 3-pointers made in a season. The Jayhawks finished the season winning one of three games against the Cowboys, who were on the bubble for making the NCAA tournament entering the day. 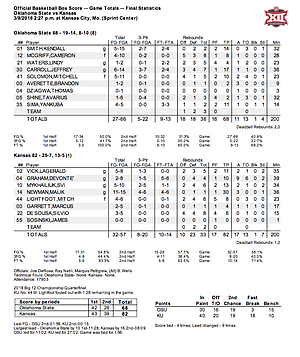 • Offensive highlight: It wasn’t the flashiest of highlights, but it was perhaps the most promising for the fans wearing blue in Sprint Center.

With the Jayhawks trying to come back from a double-digit deficit, De Sousa rolled hard toward the rim and put his hand up, calling for a lob over the top. Graham, who had the ball, didn’t see De Sousa, but it didn’t stop the freshman from making a play.

Graham passed the ball to Svi Mykhailiuk on the left wing. The senior took a dribble toward the rim and De Sousa instantly shifted his body to seal off his defender and clear a path at the rim. Mykhailiuk made the layup and was fouled. He completed the three-point play to cut the KU deficit to seven.

• Defensive highlight: While De Sousa missed his opportunity for a highlight slam, the first dunk of the Big 12 tournament for KU was not far behind. And it all started on the defensive end.

Midway through the first half, Oklahoma State’s Tavarius Shine tracked after a ball around half court and flung it ahead blindly, trying to avoid a backcourt violation. Graham easily picked off the pass and ran down the court the other way, faking as if he was going to go for a layup and then lobbing the ball softly for Mykhailiuk.

The 6-8 senior high-pointed the ball and slammed it down into the hoop with two-hands. The Jayhawks would retake the lead shortly after as Newman knocked down back-to-back 3-pointers as part of his big day.

• Key stat: After getting outscored in points off turnovers, 13-5, in the first half, the Jayhawks flipped the script to build up a lead in the second.

The Jayhawks, who committed only six turnovers in the first half, totaled just one in the first eight minutes of the second period. That efficiency allowed them to get out for a few chances of their own, which helped spark a 9-0 run in just two-and-a-half minutes of game time.

• Up next: The Jayhawks will face off against Kansas State in the semifinal round of the Big 12 tournament. The Jayhawks swept the Wildcats in a pair of meetings earlier this season and have not lost to them since Feb. 13, 2015.

Rock Chalk. Malik Newman carried us today. Vick showed up. DeSousa hit the glass hard and Devonte does what he does- a steady force of smart basketball.

I may be onto something here...every time I say Kansas won't do something, they do it.

That's a lot of power for one man to wield Bryce. Lol.

on a day that graham didn't have his best stuff and being Azuibuikeless, Newman showed up big time! Hello Newman! lol Vick was typical Vick in the first half, but what? hustle Vick showed up in the second half! he looked like he wanted to be out there and had a great second half!.....props to both Desousa and Lightfoot for having great games! and i'll hand it to Svi. I watched him....he was hustling around everywhere, defense included.....great win Hawks!

THANK GOD FOR MALIK NEWMAN! Wow, I didn't see this coming. This is a confidence builder when we don't have Dok in the game. Dare I get these dreams of chasing a National Championship, in San Antonio????????? Coach Self, please keep me focused---Wildkitties are next up.

OKAY FINE, I was wrong for once. Send a scary mob to take me to the woodshed, and stuff a big, brown sandwich in my mouth! Coach squeezed every last second out of Mitch and Silvio. I did lose it though, when Mitch fouled the three point shooter with the outcome still a little in doubt. The two bigs still had one foul to spare at the final buzzer. Just maybe 2018 will be "Devonte & The Miracles". I'm pulling for one of the top #2 seeds, then place KU in the Midwest...Wichita then Omaha packed with Jayhawks.

Fortunately Newman showed up big time, but that's what it takes to win games, someone has to take over the game. Devonte didn't have one of his better games and Svi and Vick were slow to show up on offense, so the team needed a big game from someone. Thank you Malik, great game!

Great game by Malik, there wasn't much Devonte could do against ok state, and we needed someone to step up and Malik did it. There's gonna be a game in the tourney where Devonte won't be able to score, be it a bad shooting night, or just a good defensive gameplan against him (like ok state has against him), and Malik will have to step up...

with no Dok and devonte having a bit of an off game, no way I thought we would win. But that second half, actually coming back from being down 10 in the first, wow! Now if our other guys could contribute like that when we do have Dok and Devonte is on, we could go deep.

Like your recipe, Bryce! Hey, don't knock it until you've tried it, right?

Obviously, everyone stepped up their game and showed why KU is the toughest team in the conference on most occasions. Never expected to get 14 points and 14 rebounds out of the post position, but Mitch and Silvio did yeomen jobs.

Malik put on his superstar sneakers. Hopefully, it is just the beginning of a strong run for him.

I also thought Svis' play was vital to the win...great effort and some timely hoops!

Svi and Garrett did a little bit of the intangibles kind of everything today. I hope everyone can keep it going for the next game!

I think OSU is better than OU..playing better and should get into the tournament ahead of OU ...ESPN SAYS NO?....Really?

Sorry, but Trae Young will put fannies in front of TV screens...in the end, it's always about the money!!

you are right .....unfortunately

OSU did what they did after the first win against us and lost. Unfortunately for them we were the next game after the second win.

They were tired in the last part of the game. But we have been more short handed all year than most other teams and have learned how to live with it.

We played TTU without a healthy Keenan Evans and they didn't overcome it at home. We played Texas without Bamba and they couldn't overcome it. We were without our main man who plays a position where we can least afford it and we pulled it out.

This was certainly a team effort with big time games from a size challenged Mitch and a recent high schooler with limited game experience.

Malik was the man and he dropped 30 on them and made it look easy.

Vampire Vick climbed out of his coffin, during daylight, and made a difference in more than one facet of the game.

We certainly didn't play a perfect game but it was more than enough today.

Garrett played 17 minutes and did the stuff that doesn't show up on stat sheet. He provided some good minutes to help in this win.

Imagine if our four guards all played to their maximum at the same time...Max Falkenstein could be at center and it wouldn't make much difference.

I think Malik just kicked open his door to the NBA and Mr. Langford just saw his door to KU open a little wider!!

I don't want to read too much into post game interviews but these guys sound really loose. If they stay loose then we have some great basketball coming!

I agree and watching them come out of the tunnel for the second half it was a universal look of all business.