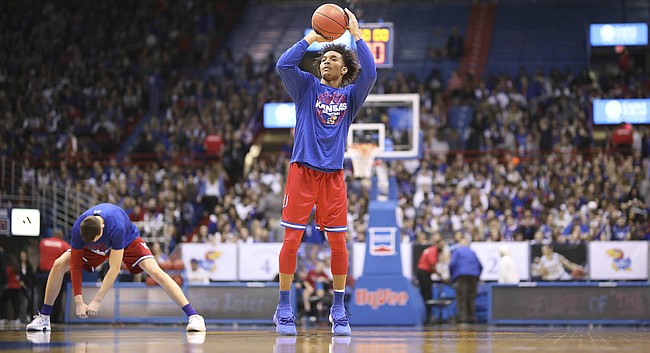 Kansas senior Devonte' Graham throws up a shot prior to his final home game at Allen Fieldhouse on Feb. 26, 2018. The Jayhawks will play Texas.

As it prepares for the regular season finale Saturday at Oklahoma State, the sixth-ranked Kansas men's basketball team has put itself in position to be a No. 1 seed in the upcoming NCAA Tournament.

If that happens — and it's still far from a lock, even though many bracket prognosticators currently have KU pencilled in a as 1 seed — it would mark the third year in a row and eighth time in the past 12 seasons that the Jayhawks entered the Big Dance as a No. 1 seed.

That alone gives KU coach Bill Self plenty of incentive to play Saturday's game in Stillwater, Oklahoma — 3 p.m. on ESPN — as if it were just another game and Self said Thursday that he had no plans to adjust his lineup to give his starters extra rest or anything like that.

Kansas basketball coach Bill Self discusses his Jayhawks' chances at getting to the No. 1 seed line by Selection Sunday in 10 days, as well as a variety of other topics during his weekly press conference.

“We're not playing for anything to help us in the Big 12 Tournament, obviously,” said Self, whose team will be the Big 12's No. 1 seed next week in Kansas City, Mo. “But (Saturday's game) has potential national implications depending on the seed lines and stuff like that. So certainly we'll play to win.”

Unlike most of the college basketball fan base, from coast to coast, the Kansas players are not flocking to Bracketology or checking the updated projections after every game, win or lose.

“I honestly know nothing about that,” said sophomore guard Malik Newman. “Coach mentioned it a couple of times and I saw something on ESPN, but I don't really know much about seeds. At the end of the day, we've got to take the same path as a 16 seed if we want to win.”

Added sophomore forward Mitch Lightfoot: “At the end of the day, it's the players that win the games and if the players are all together then you can accomplish anything.”

There's still plenty of time to worry about all of that and the Jayhawks (24-6 overall, 13-4 Big 12) could have as many as four more games before opening play in the NCAA Tournament, which begins March 15.

But five consecutive wins in the past 16 days — four over teams currently projected to be in the NCAA Tournament — have elevated Kansas into familiar territory and Self said Thursday that there was only one way to stay there.

“I think the only path is to win,” he said. “I think if we were to win, I think we'd put ourselves in a great position. I believe there are seven or eight teams, maybe more, maybe nine, that are in play for a 1 seed, and I think we're one of those. Whether or not we're on a 1 line now, who knows? … A lot depends on what other people do, but also we kind of control it, in my opinion, because we've got so many good wins. I think we have 18 wins against (the RPI) Top 100. That's a lot of wins. I think we're like second in the country in the most (RPI) top 50 wins or something like that. (Virginia leads the country with 11 and Villanova has 10). We've put ourselves in a good position.”

But that position will only matter if Kansas does what Self believes it needs to do to ensure a 1 seed and that starts with taking care of business at Oklahoma State on Saturday.

After that, provided they keep advancing, the Jayhawks could pick up 3 more Top 50 RPI wins in the Big 12 tournament — Oklahoma (37), TCU (19) and Texas Tech (23) or West Virginia (29) all could draw KU in the bracket — which would only bolster their resume for a No. 1 seed.

But it's Self's Al Davis, Just win, baby, mantra that seems to matter most right now and his players clearly have bought into that, as well.

“A lot,” said Newman on Thursday, when asked what KU had to play for this weekend. “Every game kind of has the same amount of pressure as the first game, so we still have to go down there and take care of business.”

Win, and don't get swept by a sub-par Oklahoma State team. Losing to the Cowboys in Allen Fieldhouse, and trailing by as many as 18 during the loss, was a bad enough look for KU. Get swept by them, and that's an even worse look. Maybe even worse than losing to Bucknell or Wichita State in the Tournament, or to TCU in 2013.

You're kidding, right? No regular-season loss (or losses) is EVER as bad as a loss in the tournament.

As for the number one seed, does it really matter? If anything, given KU's track record as a one seed, I wonder if it would be better for KU to NOT have a one seed.

We need win a national championship as a 1 seed, just sayin!

O-State humiliated the Jayhawks in Lawrence. It was a beat-down. Will the same happen in Greater Stillwater?

No. Self has never been swept in conference play. Don't see it happening against Oklahoma State.

For those with memory loss, the 2008 team was a 1 seed, as were all the other teams in the Final Four that year. The '88 team I believe was a 6 seed, so if you look at "recent" wins they have just as good a chance as a 6 as a 1. But we all know the tournament favors the higher seeds.

I think the not been swept record is additional incentive for Coach and the team. Coach and his teams have a great deal of pride and if at some point they do get swept, I'm betting it's by the new conference champion. There are many streaks Coach and KU have going, and none of the guys want to be the team to end any of them. The NCAA tournament appearance streak is amazing, maybe as amazing as the conference title streak when you consider the other teams from all the conferences and their levels of success.

I love our team this year....but I do not believe we are an elite club worthy of a 1 seed.I do believe that we can win the championship by playing with tremendous effort and passion ....making free throws will be very important moving forward...everyone on the team needs to improve in this area...concentrate you guys...this is a 3 seed in my opinion ...we have not played really well yet...we have played incredible in spurts and certain segments of games...but we still aren't playing our best basketball ...which is encouraging...but without the focus and energy...and the commitment to excellence..we are just average....so its very important to bring the ulltimate warrior mentality......and the Jerod Haase work ethic to advance deep in the tournament....don't look at the bracket...who cares....its about the team that you are playing ....and nothing else...put the blinders on.... and focus..... and things will turn out the way you want. 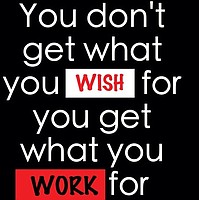 Are there any clear favorites to be #1 seeds? It's all going to come down to how several teams finish the remainder of the season. The Jayhawks are playing as well as anybody right now and if they finish out, they DESERVE a #1 ranking.

If they win the Big 12 tourney they will be a 1 seed...my point is...lack of size inside makes us as a roster ....on paper ...no better than a 3.....but these kids like to be doubted it seems...they are hungry to prove the experts wrong....remember 1983....this team just might be like that team that beat Phi Slama Jama...time will tell....I love this group...I have a good feeling about them.

We need to win in Stilwell. That place has been hell on us.

lol;...I'm from Overland Park, Ks,...Stilwell is close by, I meant Stillwater. Damn I'm getting old.

LOL. I thoughty you might be referencing the movie "A League of Their Own" (as in "Stilwell, Angel ...").