Offers for rising seniors Keenan Garber and Jax Dineen also began piling up this past spring.

For Garber, May 10 likely will be a day he never forgets, because that’s when both Kansas State and the University of Kansas came through with offers for the 5-foot-11 defensive back.

“It’s been really busy since the end of the school year,” said Garber, rated a three-star prospect in the Class of 2019 by Rivals.

While he and his FSHS teammates open this week at KU’s high school team camp, Garber will begin next week by heading west to attend an individual camp at K-State. 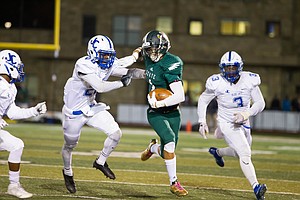 Free State junior receiver Keenan Garber breaks loose for a long run against Junction City on Friday at FSHS. The play was called back because of a penalty.

Thus far the Sunflower State rivals are the only Power Five programs to offer Garber a spot. In the past month he picked up offers from FCS powerhouse North Dakota State, as well as Indiana State, Illinois State and Tulane.

“It’s been a real fun experience just meeting the coaches and starting to build communication with them, just a family aspect, really,” Garber said of the process. “Getting to know them.”

While weighing his options, Garber keeps in touch with one of his closest friends, Lawrence High graduate and Class of 2018 K-State commit Ekow Boye-Doe, as well as former Free State standouts and current Jayhawks Joe and Jay Dineen, Jax’s older siblings.

When will Garber decide on a school and pledge his commitment?

The recruitment of his fellow FSHS senior, Jax Dineen, figures to be more open-ended.

An ankle injury suffered in the Firebirds’ 2017 playoff loss to Derby limited Dineen, a 5-11, 230-pound fullback prospect, over the past several months. 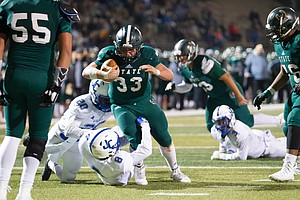 Free State junior running back Jax Dineen (33) stretches for the end zone in the second quarter against Junction City on Friday at FSHS.

“I didn’t really get to work as hard this off-season to get ready for camps this summer, so I’m gonna be little limited,” explained Dineen, who is a few weeks away from getting his ankle back to 100 percent and a full return to all football activities.

Dineen’s first FBS offer came from KU, in May of 2017. Considered a three-star prospect by Rivals, he has since added offers from Southern Miss, Air Force, Army and Tulane, as well as FCS programs North Dakota State, South Dakota, Illinois State and others.

Later this month, Dineen plans to make an unofficial visit to Clemson. In the past he has done the same at Arkansas, Minnesota and Wyoming.

The FSHS senior plans to keep his options open. And continue talking with his older brothers at KU, Joe and Jay.

“It’s an everyday thing,” he said of those conversations. “They come home on Saturdays and they’re always telling me, ‘You’ve gotta do what you want.’ Because if you’re not happy, at the end of the day you’re not gonna enjoy it. And football’s definitely a job at the college level. If you don’t like where you are then it’s just not gonna be what you want.”

Dineen: Jayhawk Garber: Wildcat (unless we beat KSU this fall)

Except that he's planning to decide this summer.

Both should go to North Dakota State and win a Natl Championship. NDSU would thump KU and very likely beat KSU too.

Thank God they don't base their decisions on comments from the LJW sports site. Even local Kansas kids can't catch a break.

All road wins and they do it with a recruiting class that ranks about 130. Most of those wins were coached by Craig Bohl who came into Lawrence and beat us.