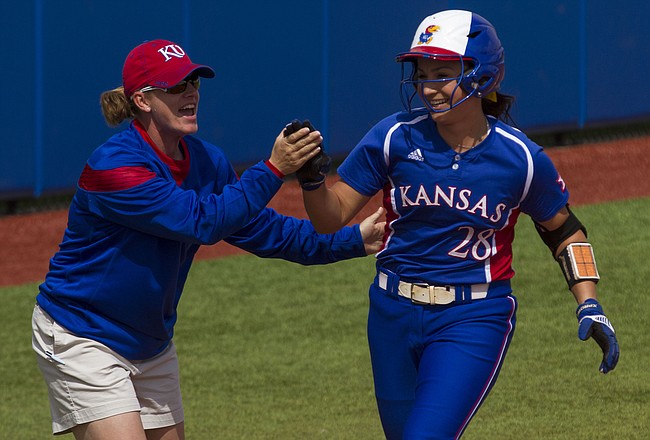 Megan Smith, head coach of the Kansas softball program for the past nine years, was named to the same position at Marshall Wednesday afternoon. Rich Wieligman will serve as the interim head coach for the Jayhawks until they find a replacement.

"I am extremely honored and excited to be a part of the Marshall family," Smith said in a Marshall team release. "There is such a strong history and tradition of success within the softball program and I am humbled to now be a part of that. I want to thank Mike Hamrick for this incredible opportunity for me and my son Cooper. I am eager to get to know the players and to get started this fall."

Prior to her time in Lawrence, Smith was an assistant at LSU for three seasons, as she helped the Tigers win the 2007 SEC Tournament and the Stanford Regional in the NCAA Tournament en route to 55 victories. She also started the softball program at Western Carolina, guiding the team to a 41-20 record in its inaugural season. Smith also served as an assistant coach for North Carolina in 2004.

"We are very much looking forward to Megan leading our softball program," Marshall athletic director Mike Hamrick said. "She is a proven winner and has a reputation for helping mold top-quality student-athletes. Our program is eager for her arrival in Huntington."

Can she take the WBB coach with her?

How is Marshall a better post than a power 5 conference with KU? What's the story behind this?

This coach was 2-16 in conference last year. Her records were largely built with soft non-conference scheduling. Perhaps this coach knew that she could not win in the Big 12 and with the new AD in town she may have found this job before being confronted with demands for better results that she likely could not achieve.

She was building real progress early on at KU getting better basically every year and looked to have KU be an NCAA tournament regular after the 2015 season. Then something happened and KU fell to the bottom of the league. That something was Rock Chalk Park. Even though RCP might be an extremely nice facility, being off campus and not walking distance from campus either is a turn off for some recruits, especially if they don't have their own vehicle.

Really? They upgraded from a piece of crap field to RCP and THAT made the team play worse in conf play? C'mooonnn.

Having off campus facilities is not attractive to everyone. When the announcement was made that KU softball was moving off campus, it took a toll on recruiting because softball players don't get full scholarships and as nice as RCP is, it's not in a convenient location to the KU campus of the campus buses. It's not the only reason for the decline, but it's certainly a big piece of the puzzle.

I respect your opinion but it don't wash my man. I know several former KU athletes in track and other sports and these staffs provide vans to get student athletes to and from campus to the practice facilities. I highly doubt a recruit declined coming here because RCP was not on campus. Hell RCP prolly landed us more recruits.

Jeff Long pretty much put Arkansas back on the map with his hire. I am guessing ol Megan saw that writing on the wall!!!! KU is a sleeping giant in softball, OU coaches have commented that these are top 3 facilities in the US. WOW, Long gets to do work and didn't even have to fire someone!