Then, the Cyclones took off in 2017. They finished, 8-5, achieved an AP poll top-15 ranking at the height of their success and capped the run with a Liberty Bowl victory.

Eternal optimist David Beaty would like to see his Kansas football program mimic ISU’s escape from the doldrums this fall.

Of course, significant differences exist between the current state of KU football and the circumstances surrounding Iowa State’s recent breakthrough.

Entering 2018, Beaty is in the fourth year of his rebuild attempt, and Kansas has won three games or fewer each of the previous eight seasons.

When Iowa State began shocking the college football world close to a year ago, it was Matt Campbell’s second season in charge, and the program hadn’t experienced the same prolonged gloom as the Jayhawks. 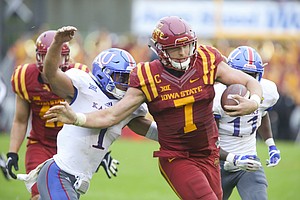 And because 2016, what proved to be the final year of ISU’s rut, also was Campbell’s first in Ames, Iowa, not much impatience accompanied the Cyclones’ 3-9 showing — especially due to the competitive nature of many defeats, with three losses of seven or fewer points and another by 10.

Even a season with numerous single-digit setbacks would qualify as progress for KU in 2018, what with the Jayhawks closing Beaty’s third year in charge with 11 straight losses, leading to season averages of 18.7 points per game scored and 43.4 allowed (14.3 scored, 46.4 allowed in Big 12 play).

But would Beaty be afforded such a luxury and receive credit for KU fielding its most competitive team in years, while suffering close losses? Or will victories be the only results that count in his favor?

Following a long pause at Big 12 Football Media Days, Beaty responded to those notions by saying, “I don’t have the answer to that. And I can’t concern myself with this. It’s not going to change the way that we operate.”

The presence of a new athletic director, Jeff Long, who starts Aug. 1, has fueled speculation about Beaty’s job security moving forward, especially if the program doesn’t turn a corner in the months ahead.

“I think what we will do is, we will go through this season with these opportunities to write it the way we want to write it. Right? As a team and as a staff, and at that point, regardless of what situation we’re in, the administration and the powers that be have to make a great decision based on what is best for that university moving forward,” Beaty said. “What is best for them in terms of what they think is going to help get that program to where it needs to be.”

Beaty’s sanguine nature leads him, though, to look to Iowa State and see a path toward improvement that KU could try to re-create.

“I will say this: Iowa State had a bunch of seniors last year,” Beaty began, referencing the 2017 Cyclones, who had nine seniors each on its offensive and defensive two-deep charts. “My hope is that we are very similar to that in terms of the way we look with returners and players that played a lot. My hope is we are able to capitalize on it like Iowa State was able to capitalize on it.”

“I think what we will do is, we will go through this season with these opportunities to write it the way we want to write it. Right?

What did he say? Even he's not sure, since he ends the sentence with "Right?"

To think that it is logical to compare a IST senior lead team with this year's team with numerous seniors is a stretch. Instead of hoping you can duplicate another teams success with wishful thinking....they did it why can't we..l think it's more prudent to think that a team will compete with proper preparation and coaching.

The administration and the powers that be have to make a great decision based on what is best for that university moving forward,” Beaty said. “What is best for them in terms of what they think is going to help get that program to where it needs to be.”

For a “great decision to come soon” it would mean the team is not competitive from day one. My hope is that the team will make major strides and not only be more competitive but finish on top more times than not. That is my hope; however, reality kicks in September 1st. The players deserve our support and our wishes for success no matter the opinions regarding the head coach. They can only follow orders. I have my season tickets and I hope others will show their loyalty to the student athletes.

I think many of us, believe that Beaty will not coach another game at KU. I think your premise is incorrect.

KU is set to lose $125K per game coached by Beaty, why pay it if we know what is already tracking based on his historical performance.

that may be a real loose usage of the word "many".

If you take the stance David Beaty is going to get fired (which I completely understand why one would take that stance), then yes it actually is the smart move.

But I don't think we want a professional AD who is going to start assuming things.

The best case scenario is that David Beaty kills it on the field and I'm sure that is what Jeff Long will be rooting for.

There it is... another football article. Regardless of the article's tone/theme, Kevin has been triggered to once again bash Beaty at each and every turn. Zzzzzzzzzzz....

And we shall see on Campbell and Iowa State. If you look at his track record: He took over for Tim Beckman at Toledo. Toledo under Beckman went 3-9 in 2008, 5-7 in 2009, 8-5 in 2010 and 9-4 in 2011. It was Beckman, not Campbell who turned the Toledo program around. Beckman's turnaround of the Toledo program is what allowed Beckman to leave Toledo just before the bowl game in 2011 to take the Illinois job. Campbell took over for Beckman at Toledo and went 9-4 in 2012, 7-5 in 2013, 9-4 in 2014, and 10-2 in 2015. So Campbell took over a winning program and continued where Beckman left off. Campbell took the job at Iowa State in 2016, after Iowa State went 3-9 in 2015. In 2016, Iowa State again went 3-9 in Campbell's first year. Campbell rightly earned Big 12 Coach of the Year for Iowa State's 8-5 season last year (2017)... as Iowa State exceeded all expectations. Mind you... coming into 2018, they have lost 9 seniors on offense on the 2-deep roster coming into 2018.. and lost 9 seniors on defense on their 2 deep roster, including their top FOUR safeties. Those seniors leading the 2017 success were not Campbell's recruits.. they were his predecessors. If Iowa State wins 6-7 games this year, then kudos to Campbell, but they have lost a ton of seniors and they won't sneak up on everyone this year. We'll see what Campbell can do with the loss of 18 seniors combined off their 2 deep roster on offense and defense collectively.

Heaven forbid we have an 8-5 season.

You just showed how Campbell improved year over year all but one year, and went to bowl games 5 of 6 years...we could only hope for such a note.

You might want to read it again. He had exactly one season at Toledo out of 4 where he exceeded the win total of his predecessor. And then when took over Iowa State... he had the exact same record than the coach he replaced. So in 7 years of coaching... his team's record improved in just 3 years versus what he inherited. Care to wager if he wins 8 games again this year at Iowa State with all those inherited seniors gone?

Don't forget 3 of those years he matched as well his predecsor...so 6 of 7, not to shabby.

Mike, you are right that Iowa State won't sneak up on anyone this year. OU and TCU will be ready to revenge last years games. Iowa State could still make a bowl game this year and I think they will, but they did in fact lose a lot of really good players from last years team.

Big12 opponents' starters have been pulled early and often. Stats could be even worse.

Imagine the laughs that KUSports writers have when they submit a football article knowing that the usual crazies will explode.....

Firstly let me say this is not directed at anyone here nor the general mood that we need a change, but Iowa State has a huge weapon KU does not...their fans. Look at their attendance the last 20 years. Even years they finish last in the conference their fans are there supporting them. They put KU fans to shame.

.....reading comprehension solves the problem of posts like yours....

Jeff, just excuses. Look at ISUs winning percentage over 20 years and compare to their home attendance.

All of this his talk will end soon. The start of the season will be the true indicators of where KU stands.

As Three Dog Night used to sing "One is the Loneliest".

Ironic that Jeff Long Starts to Work on August 1.

Ironic that the Home Opener is Slated for September 1.

A Victory over the Nicholls State "Colonels" is Crucial to the future success of the KU Football Program led by David Beaty.

That Information was supplied to me by the "Chicken Littles".

No need to put the quotation marks around Chicken Littles. It's not trademarked or copyrighted. Any use of the term in whole or in part is expressly fine with Jay Scott...

I don't think our roster and staff are ready for an 8-5 season but I do believe they should reach 4-8 with many more competitive games than in the past. That would be a clear indication this staff can get the job done.

I'll believe it when I see it. No more hope and no more optimism. The most I can do at this point is just go to the games. Which is hard enough as it is.