One of the freshest additions to the Kansas football program, offensive lineman Alex Fontana quickly impressed new teammates upon arriving in Lawrence earlier this summer.

According to those who train alongside the graduate transfer from the University of Houston, it’s Fontana’s maturity, both in his approach and physical development, that makes him stand out.

Listed on KU’s roster at 6-foot-2, 300 pounds, Fontana crossed paths with one of the Jayhawks’ largest and most talented players, redshirt senior defensive tackle Daniel Wise, on several occasions during the past several weeks.

“We worked out. We did like some walk-through stuff. He looks good. He looks like he’s supposed to look,” Wise said. “He looks like a next-level guy.”

An injury sidelined Fontana for the entire 2017 season, his last with UH after transferring there from New Mexico Military Institute. As a junior in 2016, though, Fontana appeared in 11 games for the Cougars and started five.

In the spring, junior Andru Tovi appeared to be the likely starting center for Kansas after Mesa Ribordy retired due to his history of concussions. But now it’s possible Fontana could end up winning the job and opening this fall atop the depth chart.

Identifying Fontana early on as someone strong enough and large enough to make an impact at the line of scrimmage encouraged Wise.

“And it’s helpful for the confidence of the offensive line,” Wise said of Fontana’s addition. “It’s another boost in confidence the offensive line needs, and for the team, as well, to have a guy like that who creates even more competition with guys like Tovi and whoever wants to play center.” 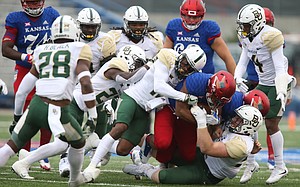 Witnessing Fontana’s offseason methods this summer definitely had such an effect on KU junior running back Khalil Herbert.

“From what I’ve seen in the weight room he’s a very strong guy. Comes to work every day with conditioning,” Herbert added. “He’s serious when he’s on the field. Outside of the field he’s a cool guy. But I’m excited to see what he can do.”

Still, KU offensive linemen other than Fontana also led Herbert, whose effectiveness so often depends on the blockers in front of him, to think this year’s O-line could outperform those of recent seasons.

“I’m very confident in the group we’ve got. We lift together, so I’ve got to see the work they do, the progress they’ve made,” Herbert said. “I’m excited to see what they can do this year. We’ve got a lot of guys who can come in and help us out. If anybody gets tired, somebody else comes in, I know there won’t be a drop-off.”

Kind of funny observation. The whole article is on the offensive line and the LJW attaches a photo of the D-Line to the article. Talk about a complete lack of respect....

Not sure a lack of respect has anything to do with it, but thanks for reading. If you notice in the story (And I'm assuming you actually read it, but if not jump in there), it quotes Daniel Wise talking about the new addition. And guess who's sitting right there, front and center, in that photo? Mr. Wise.

We don't have any photos of Fontana yet, so sometimes you have to make it work with what you've got. Benton did that here.

Thanks for your feedback and have a great weekend!

I sure hope the o-line has made improvements. I sort of “swallowed the kook aid” last year, so I don’t want to get my hopes too high. If they have made improvements, we should get more first downs, have more clock management and overall be more competitive

What we see with the O-Line is indicative of the inexperience of the HC. No doubt Beaty has learned a lot in the past 3 years. The first problem is due to his lack of rep as a HC he was unable to attract a top flight list of assistants his first year. All of us are now in hindsight realizing Yenser just was not able to develop a Big 12 OL. If Beaty had realized this a year sooner I wonder where we would be if Ricker was in his second year. Beaty is a first class person who is smart enough to learn and develop as a HC. If and when he does the program will be extremely attractive for recruits. We need to keep the current staff if there is any way possible.

Jim , Good observations. If only numbers, you can only play 5 at a time, then how many linemen are available to redshirt, or can one only redshirt on a case by case basis depending on the individual maturation of the player?

I would question whether it was his lack of reps as a HC that was unable to attract top flight assistants or the fact that he was being paid less as a HC than many assistants, much less top flight assistants. We weren't just in a recruiting hole. We were in a huge budget hole. It is easy to speculate on who we should have, or who expressed interest prior to hearing the salary. We are finally starting to turn around all of those factors. The last 3 years are really irrelevant. This year is the one that counts.