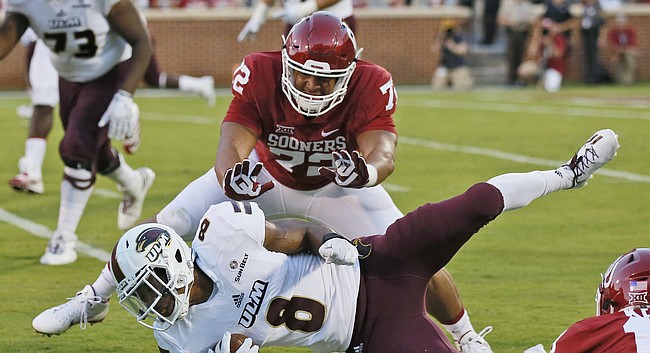 Frisco, Texas — In his 19 seasons as head football coach of Lawrence High, Dirk Wedd did not coach many players as talented as Oklahoma defensive end Amani Bledsoe.

Wedd and Bledsoe will be wishing a loss on each other Nov. 17 when Kansas travels to Norman to play the Sooners.

Wedd was hired as defensive analyst on head coach David Beaty’s staff during the offseason.

“Definitely excited for coach Wedd, the opportunity he has with University of Kansas,” said Bledsoe, recruited aggressively by Kansas. “I think he’ll do great there. Love him. Coach Wedd’s a great guy.”

Wedd, according to Bledsoe, “was more of an offensive coach in high school, but he was still there to help out with the defense.”

Multiple Journal-World requests to interview Wedd were fruitless, the most recent one with the following explanation from a media relations spokesperson: “Analysts don’t do interviews.”

Meanwhile, Bledsoe made it sound as if wearing a Sooners uniform has been every bit the honor he anticipated.

“It’s definitely a humbling experience to be able to play for a big-time school like the University of Oklahoma, being able to understand my role here and help the younger guys out, my role on the defense, being able to carry myself in a different manner, carry myself like a veteran, like a lot of the older guys on the defensive front,” Bledsoe said.

That role calls for him to get on younger players when they’re not carrying out assignments.

“Of course,” said Bledsoe, a 6-foot-4, 276-pound junior defensive end. “They’re young. They’re not mature in the manner that they will be in the future, so their focus isn’t going to be there all the way, but they’re learning. They’re still understanding, but they’ll get there in time.”

He was in their cleats not long ago.

“A lot of the older guys like Charles Walker, Matt Dimon, Matt Romar and D.J. Ward helped me come along, helped me on the way, too,” Bledsoe said.

Wedd? Seriously? Why the secrecy? What is his role? How is he being paid and how much? "Wedd, according to Bledsoe, “was more of an offensive coach in high school, but he was still there to help out with the defense.” Genius. Maybe now Beaty can hire WBB coach Schneider to coach the field goal unit...WTH?

Y’all find everything to complain about. This is old news and at the latest like week old news since media guide is out.

It's more this, you ignorant boob:

Multiple Journal-World requests to interview Wedd were fruitless, the most recent one with the following explanation from a media relations spokesperson: “Analysts don’t do interviews.”

You realize that David Beaty does not control the media relations? You remember a few days ago when he had to ask if he could say something?

The Athletic Department has no desire to correspond with the LJW. I'm sure you all think that is magically going to change when Jeff Long comes in. It's not.

When have you ever seen an analyst at Ok St or OU or Bama do interviews? Those guys have jobs to do and it is strictly football related.

BryBry -- Nice job glossing over the fact that this coach does a ton of stuff in secrecy to further hide his incompetence. Dumb hires, massive turnover, bad decisions.... hell he might as well run for POTUS

PS - no doubt Weir tired of his empty promises too.

And you know this how?

were those descriptions of things he does in secrecy? Because all of those claims you made were all public decisions.

I'd like to hear more about how much secrecy we have.

I'll type slower BryBry..... in ADDITION to the things like this he does in secrecy to hide his incompetence, he ALSO does dumb hires, has massive staff turnover, and makes bad decisions on and off the field. I know you think he talks to you in your sleep or maybe between two soup cans and a string but....and open your eyes like the rest of us to see the truth.

Just curious Bryson, are you a KU alum? If so, what year?

I asked you to show us some examples of secrecy please......

and you just added two words that completely change your previous statement. the way those words were typed it made it seem as though you were saying he hid the aforementioned things.

BryrBry focus. Should I type in caps? Maybe with spaces between each letter so you can sound it out? Secrecy: the scholarship totals since day 1, player roster, staff shakeups, (i.e. Likens was let go and they didn't mention it until the JW was alerted about it and confronted them) --- need more Bubba?

Is there a single school that is up front about their scholarship numbers? Not many schools update their roster monthly let alone anywhat occasionally and that is one example of a staff shake up because it didn't need to be public business until Likens had started finding work elsewhere.

Oooohhhhhhhhh OK. Is that what your BFF told on your telepathic conference call you have with him?

Beaty's recruiting strategy has been known for months. I've posted about it for months. your apparent knowledge source is ljworld so that shows why you dont know sh*t. Everyone who has cared to get on a legit message board has known we are doing this.

Wier was let go over 2 months ago. "mutual parting of ways". I know this because 1) I have spoken with Wier on multiple occasions. 2) i have eyes and can read messaging boards and 3) I have close friends I went to KU with that work for football team.

Don't try to knock me for information that anyone could have gotten their hands on. Sorry your primary sources got barred from AD.

So now Bryson is speaking for Jeff Long, in saying that the entire athletic department won't want to speak with KU Football when he gets here. LOL that's a whole different level of delusional fanboy.

Keep in mind, Bryson is the same guy who kept asserting that Zenger was the right man for the job, that Fontana has 2 years of eligibility, and was recently banned from Scott Chasen's message board for his shennanigans. Keep all of that in mind.

Also, Bryson, this isn't an article about an analyst. This was supposed to be an article about a well known local coach hired on at KU. Similar articles were written about Weir when he first started, and media were allowed to talk to KU football when Beaty wasn't pouting.

Bryson ruins his reputation literally every time he posts, and purports all of this grandiose insider knowledge of the KUAD.

You think jeff Long is going to replace the whole AD ?????

If people don't want to talk to the same people who trash their coworkers, i dont think a new boss is going to change anyone's opinion.

Gene Wier's job was not that of an analyst but of a PUBLIC RELATIONS role. Of course he is going ot talk to the media. He did nothing in terms of X's and O's.. Wedd is going to. He has no reason to talk to media.

Congrats on making real bold statements behind a hidden name. Give me a day and ill round up the people i know who disagree with you and we will give you 10 responses to your comments. smh

Ron Franklin. Nice to meet you voices-in-your-head-dude. Any other questions? Didn't think so.

So clarifying -- tomorrow we'll hear from these 10 imaginary people BryBry?

Any word on a replacement for Wedd at LHS?

Anybody get the feeling (at times) that we're reading the scripts for an episode of "House Wives of Orange County" on this website posted football stories?

Our “phans” are clueless I’m sorry to say. It’s been clear for a very long time how KU Athletics prefers to do things. It’s no secret that Tom Keegan has a grievance against KU Football. It’s no secret he is not welcomed with open arms. Any “ “ or other “phans” should get over it. I support KU players and coaches across the board. Whomever Our athletic department deems is qualified to run our programs is who I am Supporting. I’m a Jayhawk. I dontae. I buy tickets. I watch. I root.