Kansas cornerback Chris Harris is brought down after pulling in an interception during the first half of the Orange Bowl Thursday, Jan. 3, 2007 at Dolphin Stadium.

Two of the most popular and impactful Kansas football players in recent history, as well as a crucial member of the program’s first Orange Bowl team a half-century ago, will see their names added to the Ring of Honor inside David Booth Kansas Memorial Stadium this coming fall.

Now one of the NFL’s standout cornerbacks, with the Denver Broncos, Harris will experience the distinction first, while joining the entire 2008 team, which won the Insight Bowl, for a celebration of that achievement during KU’s season opener against Nicholls State, on Sept. 1.

A standout corner for the Jayhawks from 2007-10, Harris played in 50 games, totaling 290 tackles, including 198 solo stops, and recorded three interceptions. Harris helped the Jayhawks to an 8-5 record in 2008 and a 42-21 win over Minnesota in the Insight Bowl.

Harris is a three-time Pro Bowl selection (2014-16), was First-Team All-Pro in 2016, and helped the Broncos win Super Bowl 50. He is set to begin his eighth season with the franchise. 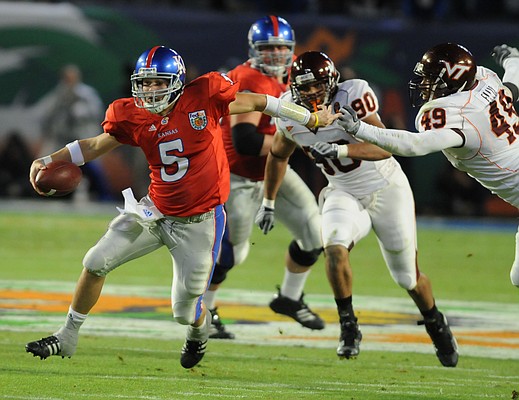 Reesing, one of the most successful quarterbacks in program history, owns 14 school records. His name will join the Ring of Honor on Sept. 15, when the Jayhawks take on Rutgers.

In a video posted to KU head coach David Beaty’s Twitter account on Monday, Beaty informed Reesing of the honor via video conference.

One of the best phone calls I’ve had the honor of making in my life—Congrats to Todd, along with Chris and Larry—in going into the Ring of Honor!! #RockChalk pic.twitter.com/cU5b21nUz5

Brown will join the Ring of Honor at the TCU game on Oct. 27. He played 13 seasons in the NFL for the Pittsburgh Steelers as a tight end and tackle, becoming a three-time Pro Bowl selection (1977-78, 1984) and four-time Super Bowl Champion (IX, X, XIII, XIV). The Steelers selected Brown as a tackle on the franchise's All-Time team during the Steelers' 75th season celebration in 2007.

KU will honor the entire 1968 Kansas football team, marking the 50-year anniversary of its appearance in the Orange Bowl, during the TCU game.

"... as well as a crucial member of the program’s first Orange Bowl team a half-century ago ..."

That's EXTREMELY shoddy reporting, Benton. Anyone with the barest knowledge of KU history knows that KU's first Orange Bowl team was in the 1940's, not the 1960's.

That aside, congrats to three players who are getting well-deserved honors.

You know you have a heck of a basketball program when your former head coach makes it into the Football teams Ring of Honor. Great Job Larry! Congrats! I know you will think it is very "special" when you are honored on the field at halftime this Fall. Just making official what we all knew all along.

If Chris Harris Jr is up there Charles Gordon needs to be next. Same thing with the most dominant defensive player of the Mangino era, James McClinton.

Charles Gordon was incredible. I still get shivers thinking about the end of his NFL career

1968 was not the first Orange Bowl team.

I feel like Mangino should have been the one calling Reesing to inform him.