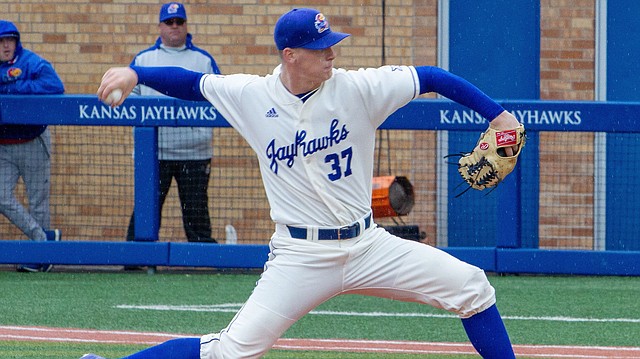 Kansas had an elite Friday-Saturday starting pitching combination during the 2018 college baseball season, but it takes more than two terrific prospects to make a pitching staff.

Jackson Goddard, who missed much of the season with a strained abdominal muscle, and Ryan Zeferjahn had scouts tracking their every move, but a lack of pitching depth couldn’t keep KU from finishing last in the Big 12 with a 6.15 ERA.

Goddard is pitching in the minor leagues for the Arizona Diamondbacks, and Zeferjahn moves into the Friday role. How the staff settles into place behind the hard-throwing right-hander from Topeka will unfold in the months to come.

Kansas pitching coach Ryan Graves already has some ideas of how his staff, which leans heavily to the left, could come together.

“Obviously we have some big holes to fill,” Graves said.

Eli Davis, a 5-foot-8, 140-pound redshirt freshman from Shawnee, Okla., is coming off of Tommy John surgery and has been cleared to pitch in Taiwan, where KU begins play Thursday in the World University Baseball Championship.

Graves predicts Davis quickly will develop into a fan favorite at Hoglund Ballpark, in part because of how much he squeezes out of such a small frame.

“Obviously, it would have been nice to have Eli this year,” Graves said. “He’s going to be a big piece of the puzzle. He’s really fun to watch pitch; really excited about him.”

The source of the pitching coach’s enthusiasm?

“His mentality and the way he can mix pitches to set up hitters is pretty special,” Graves said. “Very good at locating his fastball and he knows how to use his breaking pitches. He knows how to move the ball around to frustrate hitters.”

Graves said he expects Davis to compete to earn the spot as the Saturday starter.

“He has that mentality that you want on the mound,” Graves said. “Tough kid, gives you everything he’s got, and the way he can mix, he can go several times through the order.”

Right-hander Blake Goldsberry missed last season with an elbow bone contusion and returns for his senior season. He’s a candidate to become a weekend starter or could work out of the bullpen.

Ryan Cyr, a power pitcher, had impressive stretches during his role as setup man for KU and is the leading candidate to serve as KU’s closer, unless he becomes a weekend starter, a strong possibility.

Cyr walked 28 and struck out 53 in 53-1/3 innings in his first season for Kansas after transferring from Mississippi State.

Padget, from Graceville, Fla., was drafted out of high school in the 26th round, but decided to go to college and turned down offers from Clemson, Florida, Florida State, Georgia and South Carolina.

He pitched just 2-1/3 innings as a freshman and missed his sophomore season with an elbow injury that required Tommy John surgery.

Padget battled control problems out of the bullpen for Chipola, walking 12 in 9-1/3 innings.

Nathan Barry was recruited to KU from Sierra College in Sacramento, where his two-year record was 14-4.

“He has a good breaking ball so he could be either a starter or a good lefty out of the bullpen as well,” Graves said.

Right-handers Gabriel Sotomayor, who wraps the ball behind his back to hide it from hitters, and Brandon Ponticelli return for their junior seasons.

“All those freshmen lefties have been through the good, bad and the ugly experiences they needed to go through to be able to make the adjustments as sophomores,” Graves said. “They’re good, talented kids working hard.”

He said Washilewski has made big strides pitching in a collegiate summer league in Illinois.

VanCleave, a 6-foot-6, 226-pound native of Holcomb, was held back by inconsistent mechanics as a freshman.

“Big body, long limbs, a little choppy delivery-wise,” Graves said. “We’ve made some progress smoothing his delivery and arm action out. He has a chance to be really good. As we smooth him out from a delivery standpoint he’s going to throw a lot harder. He still has some big moves to make.”

And if he succeeds in retooling his mechanics?

“If he makes the jumps he’s capable of, he could win a weekend job,” Graves said.

Pitchers advance through the minor leagues slowly, taking the next step when they’ve made enough progress to succeed at the current level. College pitchers have no such luxury.

Goddard and Zeferjahn made big leaps between their freshmen and sophomore seasons.

None of the pitchers making a similar leap have arms as golden as those two, but Kansas will need one or two sophomores to look far more ready than they did as freshmen to make a move up the standings from eighth place.

The road to improvement starts in Taiwan.