The Kansas football team added to its 2018 recruiting class Sunday with a verbal commitment from an offensive lineman. Like so many other members in this crop of future Jayhawks, the latest addition came from the junior college ranks.

Mike Brown, an offensive tackle from Eastern Arizona College, told KU head coach David Beaty and his staff during a weekend visit to campus he plans to sign with the rebuilding Big 12 program.

Brown, rated a three-star juco offensive tackle by Rivals, was recruited by Todd Bradford, with offensive coordinator Doug Meacham involved, too, according to Jon Kirby of Jayhawk Slant. Brown told Kirby he got to meet new Kansas offensive line coach A.J. Ricker during his trip to Lawrence.

“He told me he is new just like I am,” Brown related. “I really liked being around him and he’s a good guy. He seems like a good coach.”

A first-team all-conference tackle at EAC as a freshman this past season, Brown, originally from Compton, Calif., reportedly had previously received offers from Oregon State, Fresno State, Nevada and New Mexico.

The commitment, of course, is non-binding. Brown can make his decision official by signing in February.

KU’s 2018 recruiting class now has 18 players, with Brown’s addition bringing the total of junior college prospects in the group to 11.

I don't like what Beaty is doing with this class one bit! Going JuCo and Transfer heavy is not the solution to our problem! We need High School kids we can red shirt and develop! How many JuCo's from last year was solid contributors to this team? like 1?

Uh... 8 out of our 11 offensive starters were Freshman, sophomores or red-shirt sophomores and just one was a senior. 4 of our 11 defensive starters were sophomores.. the rest were juniors and we had zero seniors. None of the players Beaty inherited ... were around to start in his 3rd season. THAT.. .was the juco reality and/or the lack of talent on the team. One senior who started on the entire offensive/defensive side of the ball (TE Ben Johnson).Only 4 starters on last year's team were from the Juco ranks.. and one of those (Hassan Defense) was a juco transfer after his freshman year.. .meaning he has 3 years of eligility at KU. Do some homework...

Enlighten me on How bad Hassan Defense was? Was that the guy that couldn't play upclose and played 10 yards off the ball? Man how many bombs was thrown on him? Maybe 7-9 ? Don't come for me unless I call for you.

Oh boy ANOTHER COMPLAINT ABOUT ADDING QUALITY TO AN AREA OF WEAKNESS. What a disgusting idea, that we should try to win more games in 2018 instead of planning on some kid winning us a game in 2021.

The problem is not that a player will help win games in 2021 its that that Juco player is gone after only 2 seasons three in this case meaning that you have to recruit the same position every 2 years and it hurts the depth on the team. While I can agree that KU needs help at the O line but quality can only be judged over time. Just because they got a commitment doesn't imply quality. If he can hold his own against Big 12 competition then lll be happy. Unfortunately most JUCOS have shown that they cannot. At least not at KU. This could be a development problem or just that the players do not have the talent to compete in the Big 12 to begin with.

May be true about typical jucos (gone in 2 years), but this juco has THREE years remaining, not two.

Im not even going to complain about it anymore.

He’s got 3 years remaining folks. Sorry we have another 3 Star To the roster

He was getting attention from TX and WV. Just saying.

Ok, Brett. This guy is 6'5" and 330-340 lbs. He never played football in high school, went on a 2 year mission, and then attended junior college where he made all conference during his first season of playing football.. ever. He's so lousy that 4 other schools offered him scholarships and West Virginia and Texas reached out after seeing film on him. Even if he redshirts this year, he has 3 years of eligibility left. Go watch his film on Rivals.com.

The over/under on the number of seniors taking the field for the first game of 2021 is now at 4. Place your bets.

When the hole gets deep, just keep digging. Some people will view it as effort.

I just hope we hit the weight room harder than the other division II football teams this off season.

All the negative fan posts have said that Beaty needs a minimum of 4 wins to keep his job, so he's going all in this year with JUCOs. We have 20+ senior, junior and sophomore classes this year. It's time to get off to an early start and win those pre-conference games for a change. I wouldn't give up a 1.6 million dollar job without a big fight either. This season depends upon how good a job our new offensive line coach is able to do with current OL players and getting our reserves to do a much better job on special teams. Let's go Hawks!!!

So he sells out the future of the program to save his job, and you think it's admirable? That's building it right?

Right now there is no future for our program, at least this one still has 3 years to play.

Let me guess, Brett: He sold out the program by getting verbal commitments from all the 4 star high school players in February last year.. .3 of whom decommitted. I'll take a 3 star, 3 years eligible juco with tremendous upside over a lesser high school player with less upside. If he has open scholarships now, how is he mortgaging the future? Don't answer.. it's a rhetorical question and you just like to denigrate anything Beaty does. I guess Beaty should just sit on his hands and do nothing now.

3-33 with no foreseeable end to the embarrassment. Fans have a right to dismiss Beaty. At some point, he has to earn the benefit of the doubt.

Oh... so in the meantime, we'll just rip on every recruit he pulls in. Don't watch, Kevin if you are so embarrassed.

Still waiting on your win prediction for next year.

Al, who are you talking to? What good is anyone's prediction? We aren't on the field assessing the talent at practices and comparing 2018 roster to year's previous. You can go ahead and speculate... but that's all it is worth: Speculation.

Four? he set the bar at six this year, why is the bar lower? is it because we have lower expectations for a poor coach?

I think that the fans are saying 4 wins to save his job, not Beaty saying that they will win 4 games this season.

I would have put the need for 4 wins in 2017 to keep is job. He didn't and he kept his job. Zenger has set the bar at 1 win to keep his job next year. He has a heavily incentivized contract and has not received one incentive.

Insanity: doing the same thing over and over again and expecting different results.

What other things come to mind???

One other thing comes to mind: You're an idiot.

This is what happens when a dumpster fire is raging out of control. I wouldn't bank on all recruits panning out whether juco, transfer, or high school at this point. It really isn't fair to Beaty, his staff, and his players that he wasn't fired last year. Beaty is in the corner getting his brains beat out and Girod is the ref who won't call the fight.

Dumpster fire and they just keep throwing more tires on it, everyone can see the smoke for miles.

Girod has not been on the job long enough to be charged with good or bad as far as Beaty goes. Girod's first real decision on Beaty will come during or after this next season.

The outcome of Beaty's job might be a forgone conclusion, but he's doing what just about any other coach would do if put in this position. I just wish he could have made more substantive progress during the past couple of years. If there is a silver lining, the cupboard won't be so bare for the next head coach. 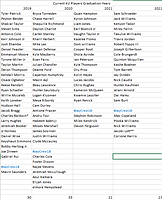 We are screwed in 2021! Bring in 3-4 3x4s or 3x3's or 2x3's and that class will be perfectly content. Given that we actually get replacement out of these kid's we are recruiting now, we will be able to get even more talent from the high school ranks that the 2021 class may have a junior or two who may be going pro early.

But what do I know? I'd rather take the intelligence of Tom Keegan & Benton Smith to the grave with me and not actually have any idea what is going on.

We are literally 2-3 HS kids away from our 2022 class being the same size as our "huge" sophomore and junior class we had this year. But none of you know or knew that because you take TK's word for the truth and then stretch it a mile past where he already stretched it.

You are all idiots. That is all.

Chancellor Girod lacks the courage to do the right thing - fire Sheahon Zenger.

The only football season that counts is 2018.

That is the problem.

No I was not, I notice you make up stuff quite often.

That was Brett McCabe and John Fitzgerald. Instead, you said this: "There should be absolutely zero season tickets bought until a change is made". Same message...

Why is there no height or weight listed for this recruit?

Next year, if Beaty does not go 6-6, he will go down with the worst winning percentage ever at KU.

It would be constructive and so much more interesting if everyone accepts that we all agree that we are completely unsatisfied with Beaty's performance and that we can now move on to actually analyzing the players who are signing and the coaching changes. The continues focus on the disappointment obstructs any potential for interesting discussion. Tom, you are too good to keep goading at the expense of recruits' excitement about their plans and our understanding of the recruits actual skills and upside. Reporting at least some of the time, man, not editorializing your known opinion in every story would keep it interesting!

I agree and I am one of the worst offenders. From now on I will honestly give an effort to only judge the talent or the intangibles that a recruit brings not my distain for the coach. I am glad that the coaching staff is focusing on one of the most glaring needs. Crossing fingers.

So coaching that can't derive the potential skills of these jayhawks should be ignored?

Straight out of Compton! Well, sort of!