During his first live and in-person experience in the Sunflower Showdown, Malik Newman's two free throws with 15.2 seconds to play gave 12th-ranked Kansas a 73-72, hang-on-for-dear-life victory over visiting Kansas State.

What happened from the time Saturday's tilt was tipped off to the moment when Barry Brown's last-second heave clanged off the rim at the buzzer was anything but normal in the typically one-sided KU-K-State rivalry. If anything, it was yet another clear indication that, past KU teams be damned, these Jayhawks are going to have to win some games like these and Bill Self is not going to apologize to anybody when they do.

“We don't have the same teams (as in the past), where we can pull away from folks,” Self said after the victory. “And when you play better competition, any win's a good win. And we need to understand that. Especially close ones. I envision us having a lot of games that are like this.” 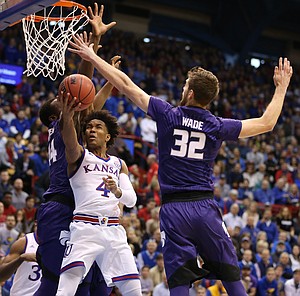 View a gallery of images from Saturday's game between the Jayhawks and Wildcats at Allen Fieldhouse.

• Both teams control portions of the game. Check.

Saturday's one-point win over the purple people from the west was not a carbon copy of Tuesday's victory over Iowa State in the same building. But it was close.

Devonte' Graham led the Jayhawks (14-3 overall, 4-1 Big 12) with what Self dubbed “a quiet 23” points and Newman, Svi Mykhailiuk, Lagerald Vick and Udoka Azubuike all chipped in enough to help Kansas survive.

Were there others who made plays? Sure. Freshman Marcus Garrett had a big driving bucket in the second half that broke a 55-all tie. Mitch Lightfoot scored two points and blocked one shot, both plays that look massive at the end of a one-point game. And even freshman forward Silvio De Sousa, who was cleared about 90 minutes before tip-off, checked into the game for four minutes, which gave Azubuike a brief rest.

But none of those plays or players could hold a candle to what KU's veterans did to will the Jayhawks to victory in this one. And, the way Graham sees it, that's exactly how it should be.

“It's just basketball,” he said after the win. “There's going to be ups and downs, the good, the bad. It's a game of runs. And, up 11, down 11, we keep that same composure and just play each possession. That's definitely why you play. It's way better than a blowout, winning a one-point game against your in-state rival. You couldn't ask for a better outcome.

“We just had to make sure we wanted it more than they did because there's a lot of guys who don't understand this rivalry.” 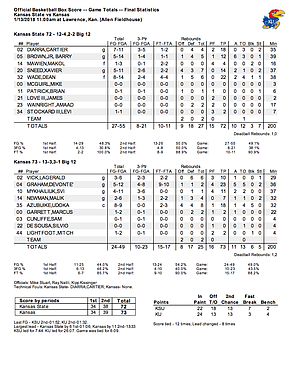 There were moments, in both halves, when a favorable outcome was not necessarily a given for the Jayhawks.

After building an early 13-4 lead, the Jayhawks were outscored 30-15 during the next 15:03 and Kansas State (12-5, 2-3) looked to be headed toward taking a lead into the locker room at halftime. But — and stop me if you've heard this one — a couple of big stops on the defensive end led to two big 3-pointers from Svi Mykhailiuk just before halftime and instead of down six, the Jayhawks went into the half tied with the Wildcats at 34-all.

“That was huge,” Graham said. “We went in tied and we had all the momentum on our side.”

The momentum did not subside when the teams left the locker rooms. After trading buckets to open the second, the Jayhawks, led by a not-so-quiet stretch from Graham, ripped off an 11-0 run that broke a 38-all tie and featured two Graham 3-pointers, three Graham free throws and an assist by Graham to Azubuike (18 points, eight rebounds) for an easy alley-oop.

From there, it was the Wildcats' turn to respond and they did exactly that, ripping off a 21-8 run that built a two-point lead and set the stage for the wild finish.

Freshman point guard Cartier Diarra played a huge part in the run, at one point scoring 11 straight K-State points, and junior Dean Wade (22 points in 38 minutes) also played a key role in bringing the Wildcats back.

A pair of Vick 3-pointers inside of 5:00 tied twice tied the game and that set the stage for a back-and-forth finish in which Newman delivered the last blow.

After a soft Azubuike tip-in of a missed layup by Graham put the Jayhawks up 71-70, Xavier Sneed's free throws gave K-State a 72-71 lead with 30 seconds to play.

Kansas, which could have held for the final shot, elected to go quickly and that led to Newman turning the corner and getting into the paint, looking for a go-ahead bucket.

Asked if he would've preferred to run more time off the clock on that final possession, Self said simply, “I won't play that way. I want to try to score and give us a chance and, if it doesn't work out, you still got a chance because, worst-case scenario, you're shooting a 3 to try to tie the game.”

It never came to that. Newman was fouled, hit two free throws on both sides of a K-State timeout and then helped bottle up Brown's attempt at heroics, contesting a 28-footer that missed and sealed the win for Kansas.

As for the two free throws that looked good the entire time Newman stood at the line, the KU sophomore said he had all the confidence in the world he would make them.

“I've shot free throws a million times in my life,” he said with a smile. “And I just looked at it like two more normal free throws and tried not to put any more pressure on myself.”

The strategy worked. The Jayhawks survived. And those facts, coupled with a Texas Tech victory over No. 2 West Virginia on Saturday in Lubbock, Texas, set the stage for a first-place showdown of first-place teams Monday night in Morgantown, W.Va., where the Jayhawks will look to snap a four-game losing streak on the Mountaineers' home floor. 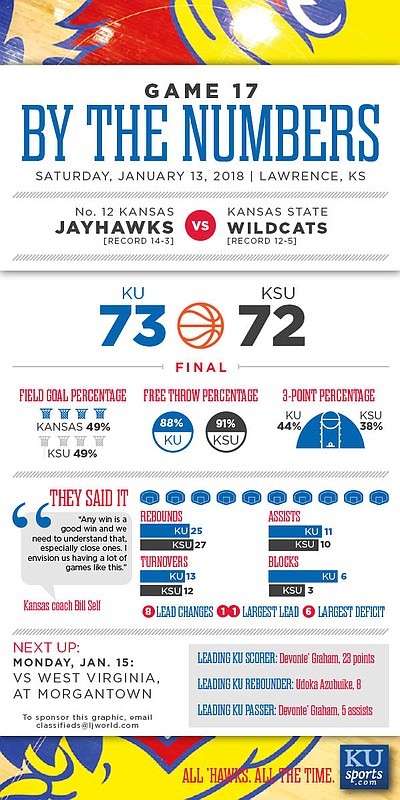 Until this week Malik Newman's game hasn't been worth talking about. But he has made his presence felt on defense at just the right time, as he has come up with big, big, big blocks. First it was a late three-point attempt by Donovan Jackson of Iowa State. Now he blocks what would have been the game-winner by Barry Brown. Malik is stepping it up, and for that he deserves all the credit in the world.

That said, there's a part of me that wishes we could go back to November when KU was kicking ass at home. KU has played only one dominating game at home since the calendar flipped to December, and that was the Omaha game. Otherwise, Kansas has looked very vulnerable at home and, of course, has been beaten twice at home (and also at their home away from home).

Much better competition might have something to do with that! Agree on Newman. Good to see him turning it up and also that he's learning there are other players on the floor (offense) and he can kick it out if needed.

I could care less about the 14th B12 title. Crap, How many times has Izzo lost on MSU home court, and yet, has gone on more to FF's when many times no one thought was possible. I know, same amount of NC's as Self, but he does have just a few more FF banners. To me those are more important than conference titles. Lately, (past few years) defense has kind of gone away under Self.

Here's to another season. RCJH KU!!!

Svi needs to never drive to the rim ever again while in a Kansas uniform. That guy literally missed about 9 layups in this game. For someone who is 6-6 to be incapable of driving to the basket or handling the ball is egrecious ball-playing. yuck!

I don't mind the drives...maybe just take mid-range jumpers in the lane...

I dont' mind the drives either, IF he learns how to throw lobs or get fouled while penetrating.

Oh, I don't mind him driving, spinning around and dunking the heck out of the basket ala Wiggs. We need to see that more often from Svi. That's a heck of a move.

Svi is 6-8, why he's the 4 in the current starting line up. Second, Svi driving will force defenders to back off him on the perimeter which will help him create space to get more open 3's.

Bryce, I'm totally with you in wishing we were blowing teams out at home still. And I'm glad Newman has stepped up the last two games, but he never came close to blocking Brown's shot at the end. Contested, yes, blocked, no way. He just missed it wide.

We've got so many guards, but I just don't understand how they don't see if our bigs got positions established. SO MANY TIMES, Garrett or Malik kicked the ball out off a dribble drive when Silvio or Dok had clearly established nice positions inside. It's so frustrating. Good thing we now see more pick and roll with the bigs. Yes, bounce pass to bigs looking good by Graham. Rebounding is still a nightmare for KU. No box-out. That's one of fundamentals in defense. We're so much better when we share the ball. We make more baskets when we use the bigs more. Our guards need to share more.

Realizing that this bunch is not as dominating as we're used to should produce a helluva lot of fun, white-knuckle conference games. Rock Chalk!!

White-knuckle fun is a great way to describe it, along with pull your hair out frustration! lol Man our perimeter offense is really stroking the ball but our perimeter defense continues to struggle. Our guards are routinely beaten off the dribble and taken to the hole and they struggle mightily to either stay with their man or aren't able to recognize and get back leaving too many wide open jumpers. Not sure if we just lack the athleticism to do this or if it is just a lack of defensive instincts. Either way, the lesser defensive results make way for some impressively fun offense!

Keep yourself between your man and the basket, remember your scouting report and overplay him to force him to use his weaker side to dribble every time.

Am I off base to think these recommendations are achievable goals???

This season is probably the strongest the Big 12 has been, top to bottom, in its relatively brief history. In a normal season there are at least two to three teams who absolutely suck and allow KU a night off occasionally, two or three teams in the middle of the pack and two or three teams who can compete with us toe to toe. This season, it seems, every team the Jayhawks play is in the latter category. True, KU has some deficiencies defensively and depth wise, but K-State, Texas Tech and TCU have been really tough, unlike most seasons.

We were dominated in the Wade/Svi matchup. I would love to see a Wade/Preston matchup next time around, allowing Svi to move back to his natural defensive assignments. Still needing more out of Vick, who is looking more and more like a 4th year senior.