Kansas guard Lagerald Vick (2) reacts to a shot attempt by Kansas guard Devonte' Graham during the second half, Tuesday, Jan. 9, 2018 at Allen Fieldhouse.

Kansas’ 83-78 victory over Iowa State Tuesday night at Allen Fieldhouse not only got the Jayhawks back on track in their cozy home arena but also became the latest installment in a trend based on revenge.

KU coach Bill Self may not exactly see it that way. In fact, when asked this week about the rematch with an Iowa State team that defeated the Jayhawks the last time the two teams squared off at Allen Fieldhouse — 92-89 in overtime, on Feb. 4, 2017 — Self scoffed at the idea that payback was a motivating factor in Tuesday’s matchup.

“I think media makes a bigger deal out of crap like that than what we do,” Self said ahead of Tuesday’s game. “Will I mention it? Yeah, I’ll mention the last time we played them they beat us in our building. But that’s not something you circle and froth at the mouth at since last April because of one game. At least that’s not how it works with me. ...If you have to motivate them that way, I don’t quite buy into it as much.”

The numbers suggest these kinds of rematches at least mean something. 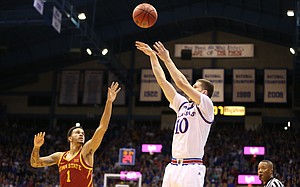 The Jayhawks (13-3 overall, 3-1 Big 12) now are 6-0 in the next meeting at Allen Fieldhouse following six home losses to Big 12 teams during the Self era. The average margin of victory in those six games? Thirteen points.

The largest margin of victory in that stretch came via a 97-70 pasting of Kansas State in 2007 after falling to the Wildcats in Lawrence, in 2006. KU also beat Texas A & M by 20 in the fieldhouse rematch that came two years after Acie Law IV’s big shot buried Kansas.

Add one more to the win column for rematches with any team that has beaten the Jayhawks at Allen Fieldhouse during Self’s time in charge, as the Jayhawks also got revenge on San Diego State for a 2014 loss by beating the Aztecs by 13 in their home gym the following season.

The Jayhawks have not played Nevada, Richmond or Oral Roberts again at home since losing to those teams, and also have not yet had a chance to avenge this year’s home losses to Arizona State or Texas Tech. 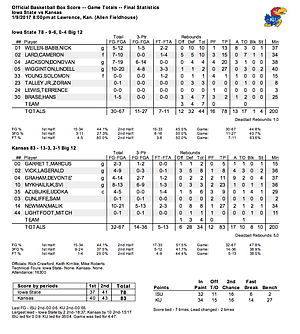 And the Cyclones did, looking to push the tempo and catch Kansas in transition any time they could.

So was the idea to take advantage of KU’s limited depth or is that just the way the Cyclones play?

Iowa State turned it over 17 times compared to just 10 for Kansas.

As expected, freshmen forwards Silvio De Sousa and Billy Preston did not play Tuesday night, marking the 15th game on the bench for Preston since a compliance issue involving his vehicle surfaced in mid-November. It was the fourth game played by KU with De Sousa sitting on the bench in street clothes.

While KU coach Bill Self said earlier this week that he remained optimistic that both players would know their status in the eyes of the NCAA and still could join the rotation soon, one thing is crystal clear about their potential addition.

How much they can impact a game remains to be seen and could take some time, but they will be ready to play. Self and his staff have made sure of that in the way they’ve prepared them.

“Right now, we’re saying, ‘Here’s three things you need to know on offense, here’s one out-of-bounds play, if they run zone here’s one thing you need to know in zone,” said Self, specifically talking about De Sousa. “I was talking with him (Monday): ‘Just be able to play and do those things without thinking and you can help us.’ If he’s a thinker, he won’t be able to help us much. In short spurts he can get in there and help. I don’t think it’ll be extended (playing time) until he gets more comfortable.” 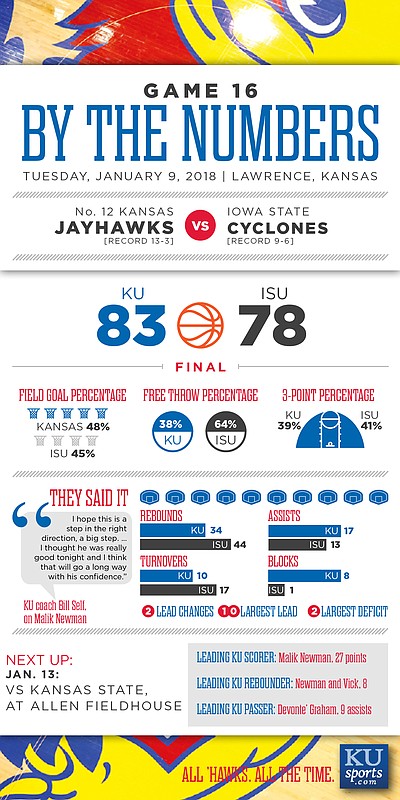 unfortunately, i wouldn't call that win 'back on track'. Iowa State is not a good team and didn't play great either and we barely won......at home! This team is not playing good basketball right now.

agreed....this should have been a 20 point blowout with ISU keeping the game close in the 1st few minutes..KU allowed way too many open 3's..they went up by 8 or 9 twice and looked like they were about to finally put the game away midway 2nd half, but then they allowed ISU to make a run..if they wanna beat the top BIG12 teams, even at home, they will need Newman to play like this and fix the defensive issue..not much they can do with their rebounding, they dont have the bodies t fix that..but it would be nice if Cunliffe could produce more...

Yep. And it wasn't just open threes, there were way too many drives to the basket that went unimpeded by much of a defense.

Kansas should have beat this ISU team by 15 or more, can't let these lowly teams stay close

Lets contrast the treatment Billy and Silvio are receiving versus WVU Forward Esa Ahmad! The NCAA suspended Ahmad for "1/2 A Season" for "Failing to Meet NCAA Eligibility Requirements"! If you dig deeper, the Rumor is "It was for a Failed Drug Test!"

Promptly, on Tuesday Jan. 2 (after the Holiday Break) , the NCAA (and Oliver Luck) Ruled that Ahmad becomes eligible to play on Sat Jan 13 at Texas Tech and then of course for Mon Jan 15 versus KU in Morgantown. Does anybody smell some "Home Cooking"?

Meanwhile, the NCAA and (Oliver Luck) continue to delay Decisions on Billy and Silvio! Admittedly, the Circumstances for All 3 are different cases, but why more delay? Maybe the NCAA wants to defer until KU starts the spring semester on Tues. Jan. 16? By the way, WVU started classes on Mon. Jan 8, and the NCAA had the integrity to tell Ahmad, "No , you can't play versus Baylor on Jan 9! Oliver "Twist" Luck?

I think with Amhad, the NCAA knew the punishment before the season started whereas with Preston and DeSousa, these were situations that they had to prepare for IN season..still no reason for it to take THIS long though

This is the worst rebounding team we have had in the Bill Self era. I don't want to let them off the hook by blaming it on lack of size either. Most of the teams we have played have been about the same size. The team is soft and it shows on the boards. Even Udoka gets muscled out of the way by a 6'5" guy on most occasions. It's about blocking out and staying with the block out and going to the rebound. We just flat out don't do it. The other thing that shows the lack of toughness is the way we screen and the way we set up the screen. I have seen middle schoolers do a better job at it. Our dribble drive game could be so freakin' good with these guys if they would just perform the very basic pick and roll with a purpose. Right now everything just looks so much like going through the motions. Someone show them Thomas Robinson and Darnell Jackson tape. Those dudes knew how to block out and get rebounds; and they knew how to set solid screens. Jeeez!

They don't have to go back to Darnell and Thomas. Just remind them about Frank Mason from last year; he was a great rebounder and didn't let his size get in the way.

Has no one anything good to say? Iowa State has always been a tough out. To them, we are their biggest rival and they had more success against us their overall record would indicate. Iowa State has won 3 of the last 4 BIG 12 tournament championships.

Matt, this may be niggling but I would think beating Iowa State on their court would be avenging a loss to them on our home court.