Jayhawks drop two spots to No. 12 in latest AP poll 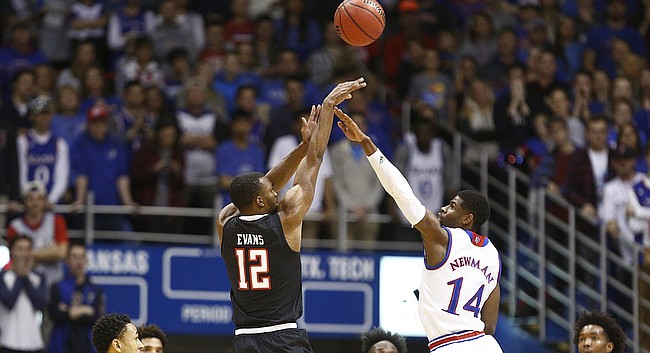 Texas Tech guard Keenan Evans (12) puts up a three over Kansas guard Malik Newman (14) during the first half, Tuesday, Jan. 2, 2018 at Allen Fieldhouse.

Last week’s home loss by Kansas to Texas Tech did more to help the Red Raiders than to damage the Jayhawks in the latest Associated Press Top 25 poll.

West Virginia, which jumped from No. 6 to No. 2 after its convincing win over Oklahoma over the weekend, is the top-ranked team in the conference, with Oklahoma sitting third at No. 9.

Despite their loss to Kansas, the Horned Frogs remained in the No. 16 spot in this week’s poll.

There was not as much shake up in the middle of the poll because of the large number of losses suffered by teams between No. 5 and No. 20 during the past week. Seven different teams ranked in that range lost last Saturday alone and a couple of them suffered two losses during the past week, creating a situation where many of the same teams simply were shuffled around in the middle of this week’s poll.

Kansas will face back-to-back unranked teams at home this week — Tuesday vs. Iowa State and Saturday vs. Kansas State — before heading east to take on West Virginia on Jan. 15.

Here’s a quick look at the updated rankings.

Sucks to be looking up in the rankings at so many Big 12 teams - OU, WVU, TTU - as well as little brother down south, WSU.

Yep...not even the best team in the state of Kansas, let alone the Big XII.

Patience, gentlemen. When KU won the n.c. in 1988, they finished fourth in the Big 8 and were a sixth seed I believe.

But runs like 1988 by lower seeds are the exception, not the rule.

Well, if you look at just KU, in modern history, we have as many National Championships as a 6 seed as a 1 seed. Kind of makes it irrelevant doesn't it? In '88 we weren't the best team in Kansas either.

Hopefully, we get the two bigs and things get better soon.

It would be nice to have a set roster for the rest of the season. However, it's better not to have vacate games won because KU played an uneligible player.

Many games to play to actually determine who is better in the Big 12 during the league play and in the Big 12 tournament. Just glad KU won on Saturday (after the Chiefs' collapse). Ranking for KU seems about right after a number of upset during the previous week. Interestingly, MSU only dropped 3 places after a beat down by OSU (ever team this year has a chance for an off night).