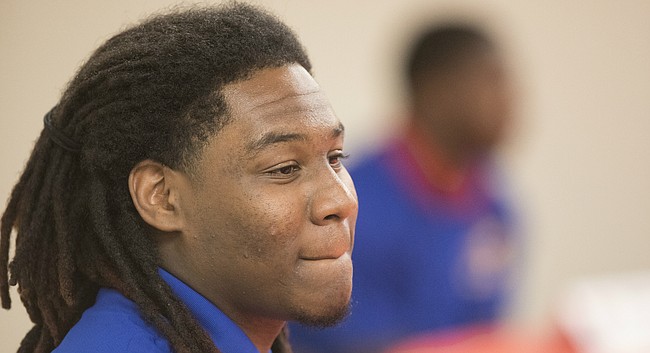 When defensive tackle Charles “Codey” Cole decided to sign with the Kansas football program, he didn’t know whether a key Jayhawk who plays the same position, Daniel Wise, would still be around by the time he arrived in Lawrence for the spring semester.

Although some players in Cole’s position might have rooted for Wise leaving KU early to enter the NFL draft, leaving more vacancies on the defensive line in the process, the new Jayhawk was glad KU’s star lineman returned for the 2018 season. The 6-foot-3 transfer from Butler Community College plans to pick Wise’s brain as much as he can.

“That’s my biggest thing. I want to learn,” Cole said. “I want to be a student of the game before anything.”

Wise, a versatile 6-3, 290-pound lineman headed into his redshirt senior season at Kansas, is an ideal mentor for Cole. The 280-pound junior hopes to prove to KU coaches he, too, can move around on the D-line and produce at various positions, just like Wise. 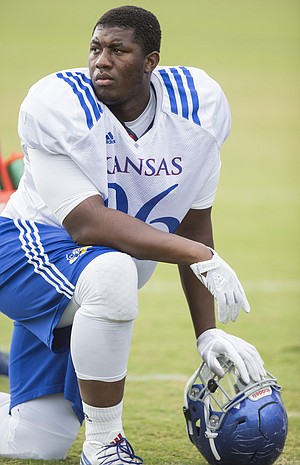 “All my life, I have played every spot on the D-line,” said Cole, whose college career began at Division II Tiffin.

As a freshman in 2016, Cole played nose guard, defensive tackle and defensive end, accumulating 22 tackles and 5.0 tackles for loss, plus two forced fumbles in the process.

He kept bouncing from spot to spot at Butler, as well, where he became a 3-star JUCO prospect as a sophomore, contributing 19 tackles, 3.0 tackles for loss and a pass breakup.

Once Cole got to KU, defensive line coach Jesse Williams informed the Ypsilanti, Mich., native he needs to learn all four positions to maximize his impact and help the unit’s depth.

“Because you never know what you may need that week,” Cole said. “You may have to go to a big lineup and move me to end. You never know. You may go with a little lineup and I go back inside.”

Wise has gone through such shifts when possible, but all that goes into pulling off that adaptability is just one aspect of the veteran’s arsenal Cole hopes to replicate. The pupil has worked out with Wise plenty since moving to Lawrence.

“He taught me things I didn’t know anything about already. That’s just a blessing right there. His work ethic is loud by itself,” Cole said, “with what he does on and off the field.”

The former junior college lineman knows he has a lot of work to put in, but Cole hopes before his career at Kansas concludes people will watch him play and at least see a little bit of Wise in him.

“Definitely, I could see myself doing a lot of things that he (does). Now, do we play the same? I don’t know,” Cole said with a chuckle. “We’ll have to see when the pads get on. I’m just excited to be here, and I’m blessed to be here.”

We will need production from Cole. Happy he is here. Pulling for him and all the Jayhawks. Will be interesting to see these new guys at the Spring Game.

I'm excited for this guy to work well with wise on the line. It'll be a key to stop the run, and force the QB to throw early. We'll see.

Will miss Wise after this season. He was the only HS DT that Beaty ever gave a scholly to in 4 recruiting classes. No coincidence that the KU legendary DTs (Brown & Stubblefield & Moore) were all HS DTs.

I would say I'd love to meet you and talk KUFB at a game but more than likely you're a fan who watches from the couch hiding behind quotation marks.

So has Beaty signed a high school DT?

No he hasn't Jeff. I haven't decided if that is alarming. The man was dealt a roster with maybe 4 players capable of playing at this level. Quite frankly we can't get 4 and 5* DT's and we definitely couldn't then so the only option is and was JUCO route. Building a roster 25 scholly's at a time is not easy and DT is honestly a spot that you cant play young. We had to build at so many positions I don't think we have had the opportunity to recruit a HS'er. We do have Jacobi Lott who played both sides and I expect to see both sides so that can count as one.

So here I was trying to give Beaty some credit. Silly me. I guess he still has not given a HS DT a scholarship and still has that annoying, historic, god awful 3-33 record.

I actually thought a little more of Beaty for a second, but then remembered he's not all that great at recruiting either... Stupid me.

Bryson, those days aren't going to happen this year, so maybe hold off on the personal attacks and the gloating. It's sad to watch.

We just had according to many people one of the better recruiting classes for Kansas (the coach thinks the best in the history of KU). Many people think it is heavily weighted towards JUCOs, others believe it is a win now or go home. However you look at it, besides the announcement of the Spring game this is the only article about the team since signing week.

Is this an indicator that there is a lack of enthusiasm, excitement, and expectations for our football team next year?

A better indicator is the 500 fans who will be at the spring game versus the 90,000 who will be at Nebraska's and OU's spring game. Then check back in September when 18,000 show up at Memorial Stadium for the home opener against 8-4 Nicholls State.

There were less than 10k people there in 2009. KU fans just suck at supporting football and even more so suck at supporting a program that isn't winning 100% of the time. people leave basketball games early now and stop watching games bc they think we are going to lose.

The term fan and ku hardly go in the same sentence now.

The terms KU and quality football have to belong together first. Don't blame the fans for not wanting to watch the worst product in the sport.

Let's enjoy the process. First, Spring ball, then Fall camp. And finally, pre-conference. With a lot of effort and players in the right positions, let's hope that our win-loss record improves this season.