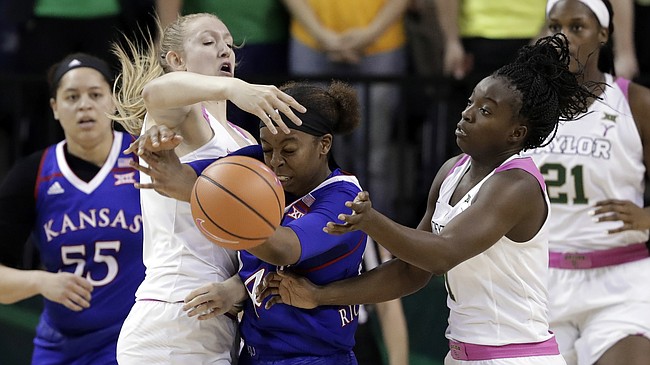 Waco, Texas — Baylor coach Kim Mulkey has often said she never tells a shooter to stop shooting when they go into a slump.

That philosophy paid off Saturday.

Kansas women at No. 3 Baylor 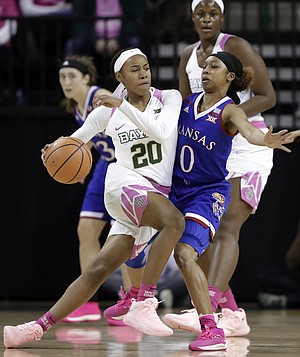 “I think it’s a mental game with shooting,” said Wallace, who hadn’t made a 3-pointer in the three previous games. “If you have missed in a few of your past games, it’s just a mental thing and you keep shooting the ball. If you’re open, shoot it, and my teammates were able to find me.”

“Kristy Wallace and Dekeiya Cohen have led this team the way you want seniors to lead them,” Mulkey said. “They don’t require a lot of attention. They’re not high-maintenance kids. They just go out every night and do their job.”

Kansas’ best shot to make it a game came late in the second quarter. The Lady Bears led 35-29 but had both of their post players in Brown and Cox on the bench with two fouls apiece. But Baylor went with a smaller lineup and outscored the Jayhawks 12-2 the rest of the half.

“They’ve both been in foul trouble before,” Mulkey said. “We’re a lot better team when they’re on the floor, obviously.

“We’re tougher to defend, but if we have to go small like we did, we’ll just change what we’re running and what we’re doing. I thought we got some good minutes before the half where we could extend the lead.”

The Lady Bears didn’t commit a turnover until 4:10 remained in the third quarter. They also took advantage of Kansas’ 21 miscues and outscored the Jayhawks 34-3 in points off turnovers.

“I thought for us to have success, we would have to shoot 30-35 3s,” Kansas coach Brandon Schneider said.

“We got about 10 fewer than I wanted. We passed some up. I thought Baylor made some adjustments and got back to shooters, and made them fall more out of rhythm in the second half.”

Kansas: Lyons and Kopatich were the Jayhawks’ leading scorers coming in, and both exceeded their season averages. But they didn’t get much help, and their other double-digit scorer for the season in Brianna Osorio was held scoreless.

Baylor: Wallace also had six rebounds, four assists and two blocks. She also made a pair of highlight-reel hustle plays, one in which she raced down the floor for a block after committing Baylor’s first turnover, then chasing down a loose ball near midcourt and leading to Cohen’s 3-point play.

Mulkey found out right before tipoff that she had been selected as one of 13 finalists for the Basketball Hall of Fame.

As a player, she won an AIAW and NCAA championship at Louisiana Tech and a gold medal with Team USA in the 1984 Olympics. She’s the only basketball coach, men’s or women’s, to win national championships as a player, an assistant coach and a head coach.

“I couldn’t do it by myself. I’ve been blessed to have unbelievable coaches, and we’ve been able to get in more doors now. If I’m ever fortunate enough to get in, I hope Baylor will help pay for every player I’ve coached to be there, because I’m only as good as they are.”

The Hall of Fame class will be announced at the NCAA men’s Final Four in San Antonio, and the enshrinement ceremony will take place in the fall.

For a good cause

Mulkey is known for her fashion flair, but she and the rest of her coaching staff were dressed down Saturday.

They all wore blue jeans, T-shirts and pink tennis shoes, and Mulkey added a pink headband as part of the Play 4 Kay/Sic ‘Em For the Cure game.

Baylor will attempt to clinch its eighth straight Big 12 regular-season title on the road against No. 6 Texas on Monday.

Not sure how many more losses Zenger hires can have? We're at 22 Big 12 losses in a row between football & WBB.

By the Zenger standard Schneider will get his pay doubled at the end of this year....