AMES, IOWA — Iowa State’s Solomon Young went up for a short baseline jumper, and Kansas center Udoka Azubuike went up with him and made contact. The whistle blew, and 21 seconds into the second half, Azubuike picked up his third foul.

He stole a glance toward the bench, figuring he would see Mitch Lightfoot being summoned to replace him. Lightfoot remained seated.

“I thought (Kansas coach Bill Self) was going to take me out, to be honest with you, but he kept me in the game,” Azubuike said afterward. “He trusted me. He told me, ‘You’re going to have to play with your head and your feet,’ so that’s what I did.”

He went to town is what Azubuike did, scoring 12 of his team-high 19 points in the second half to lead Kansas past Iowa State, 83-77, Tuesday night in front of 14,384 spectators in Hilton Coliseum. (Kansas won the first game vs. ISU, by a nearly identical score, 83-78, in Allen Fieldhouse).

Azubuike’s three rebounds and three blocked shots all came in the second half, when he played 15 of his 22 minutes. 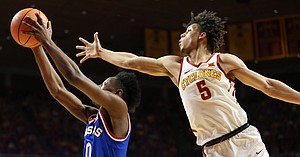 Most college basketball coaches almost automatically bring a key player to the bench if he picks up his second foul in the first half, and do the same when he gets whistled for his third early in the second half.

Self wasn’t in the mood to see anything less than his best lineup on the floor, so he gambled on his ever-improving big man. Azubuike was eager to reward his coach’s trust in him and knew he had to pull off a challenging juggling act to do so. He needed to play aggressively without picking up a quick fourth foul.

Azubuike pulled it off, fighting hard to establish position close to the hoop at the offensive end.

Lagerald Vick and Azubuike combined to score KU’s first 15 points of the second half, Vick’s coming on a trio of 3-pointers and Azubuike’s as a result of sure hands, sound footwork and a soft touch close to the basket on a variety of shots.

He scored on three consecutive possessions, each time growing KU’s lead from single to double digits.

“We saw how much better we are with him in the game because we can play through him in the post,” Self said. “I thought he played really well.”

Azubuike didn’t pick up his fourth foul until 1:58 remained in the game and Kansas led by nine.

The lead had grown to 13 points with 4:46 after Azubuike asserted himself at both ends with back-to-back dunks and a couple of blocked shots.

KU’s guards repeatedly looked for the big man late in the game with lobs that he flushed easily.

“Lobs look like they’re really fancy and hard plays,” Self said. “It’s probably the easiest pass a human being can make because you can throw it anywhere, and if a guy is big and athletic, he can go catch it. And all you need is just a little space to be open.”

Self would like to see his players take advantage of Azubuike more with alley-oops because he is so reliable at converting them. 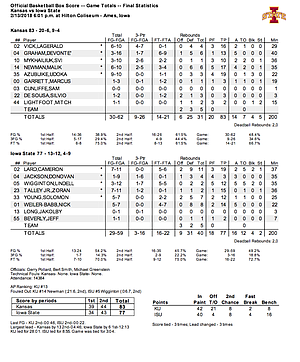 “We haven’t done a good job of throwing it, but we did tonight,” Self said. "That’s an effective offensive play for us and I think a lot of teams. If you have a guy as big as Dok who can jump, he’s such a big target to see. You just have to kind of throw it up there.”

Azubuike has developed into an offensive force. When all four shooters surrounding him are in a groove, it makes it tougher to double him. It becomes easier when freshman Marcus Garrett — a strong defender, but not a shooter — is in the lineup.

“That’s a big release off the four guards who are on the court with him, knowing whenever we need a big basket, we can go in to the big fella,” sophomore guard Malik Newman said.

The guards can return the favor to their center by not putting him in jeopardy of picking up fouls.

“He got called for four fouls tonight and two of them were just because somebody else can’t guard their man and he has to come help, and that’s so frustrating,” Self said. “He only had one bad foul tonight.”

Self gambled a little in trusting that his only bona fide center could continue becoming a force without drawing whistles, and it paid off in a big way. Smart play by the coach whose team remained one game behind first-place Texas Tech in the Big 12 standings with five games remaining. 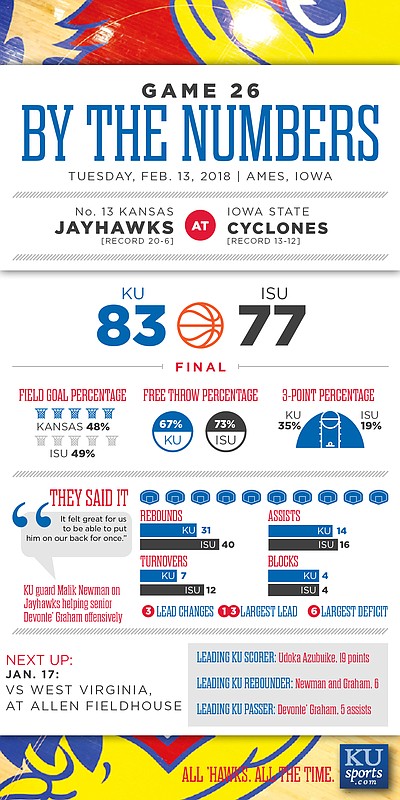 'Self would like to see his players take advantage of Azubuike more with alley-oops because he is so reliable at converting them.' --- Been sayin' that the whole season, coach.. Now, guards be ready to cut, because Dok will likely be double teamed. Dok will get more lobs if he knows how to move around and come from behind - remember JJ and Wiggins?

Dok is very definitely still learning. That was a significant comment early in the season. Part of the limited number of opportunities for Dok is a matter of him still learning how to post-up and receive entry passes.

I’ve always wondered why coaches are so afraid of a player fouling out. Sure you might need a key player for a key sequence at the end of the game. However when you sit a player, you are guaranteeing that he is not contributing, compared to the mere possibility of having him foul out. Last night we saw what happens when you just leave him in.

And the Baylor game showed why to take him out.

Self rolled the dice and won. Now I hope he has a sustained winning streak.

The Baylor game showed why to leave him in, and Why Coach is in the Hall of Fame while we're on a keyboard.

Good team effort last night to say the least. It was encouraging to see others step up when needed. Maybe this will give Newman and Vick the confidence they need going down the stretch. Big Dok is a monster plain and simple. He will be the best big man in the country next year. Hope he stays. It would be nice to see Graham get some rest, if only we could get a good lead. It looks like Svi is starting to feel better and if other guys are hitting shots it should take the pressure off of him. Lets go Hawks

Finally, Kansas looked like a team again for the first time since the Kansas State game in Manhattan. The last three games they looked like a bunch of individuals doing their own thing, and looked that way at first in this game as they fell behind 17-11.

Maybe should have left Dok in the game late to shoot free throws.

Um, the Jayhawks were playing the worst team in the conference.

Iowa State is never easy at home. The Cyclone's and fans always make it tough in Ames.

Nastiest and most ignorant fans in the Big 12, I might add.

You mean the worst team that had already beaten three ranked teams at home this year?

Good point. Iowa State would have substantially more victories in just about any other conference and would probably in the hunt for the conference title in any of the not top 5 conferences.

The “worst” team in the conference that, until last night, had the same number of losses at home as Kansas. They had beaten three straight ranked opponents at home: TTech, WVU, and OU. They have not won on the road in the Big XII this year. ISU is a good team.

Kansas has only two road losses while Tech has three. Tech, however; has not lost at home while KU has two home losses, hence the one game deficit in the standings. If Kansas wins out they will at least tie for the conference lead.

Once again, Coach Self demonstrated why he is a Hall of Fame coach. With Udoka playing 15 minutes in the second half, KU is a well balanced offense that enables everyone to contribute, and that is clearly what they must have to be highly successful.

Without Dok, KU becomes a perimeter team, and opponents can afford to play man to man defense to defend the 3 point line. Now, if they try to pack it in to stop Dok, it opens up more options for the rest of the team, all of whom are pretty good outside shooters.

In short, with all five starters in double figures and Dok dominating the paint, KU is capable of beating anyone.

One perhaps overlooked positive is that Silvio had 3 rebounds and 3 points in his two minutes of play in the first half. Obviously, not much of a sample size, but if it continues, he could become a factor going forward. Hope so because it looks like he really is trying hard.

DeSousa looked much more comfortable than he has..even on the goal tending I like that he challenged the shot

Maybe there's hope for Silvio, though some have already written him off as hopeless.