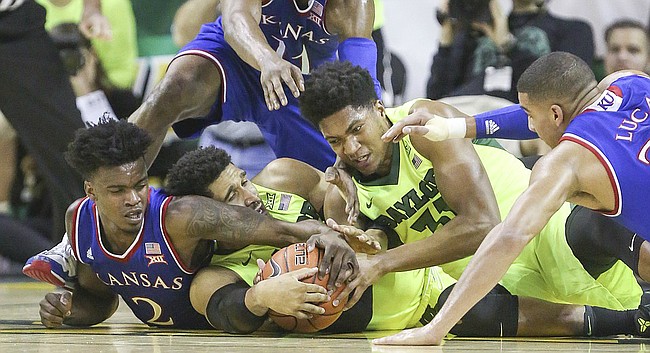 As they have done all season, the Bears played a mix of man-to-man and zone defense in their near upset of the Jayhawks at Allen Fieldhouse a couple of weeks ago.

While Scott Drew's squad has been known most in recent years for its strong 2-3 zone, the Bears' man-to-man D this season has been almost as impressive and KU coach Bill Self said this week that Baylor's added defensive wrinkle has forced the Jayhawks to work overtime in their preparation.

“I think prepare for both,” Self said. “I think you got to prepare for their zone because their zone can make you look real bad. We made shots early, got out to a nice lead, then they go man. That's when they actually came back and controlled the game. Scott does a good job of switching it up. We got to be prepared for both.”

The Bears' ability to play two different types of problematic defenses is reflected in their status as the Big 12's leader in effective field goal defense at 49.1 percent.

Pace will continue to play an interesting role in this one, with the Jayhawks looking to run at every opportunity and the Bears content to play slow and out of half-court sets, as evidenced by their Big 12-best 57.3 percent of offense coming from 2-point shots.

2. Stay strong on the glass

Raise your hand if you would have guessed this: Despite enduring a stretch in which they've been outrebounded in 12 of the last 13 games, including 10 in a row at one point, the Jayhawks actually have grabbed exactly the same number of total rebounds as their opponents — 867 — through the first 24 games of the season.

The Jayhawks still trail significantly in offensive rebounds — 290-233 — and that stat could come into play in a big way in today's matchup with Baylor.

Kansas, which was much better on the defensive glass against TCU, still ranks last in the Big 12 in allowing offensive rebounds, in this case, actually giving up a higher percentage per game to opponents (36.4) than the Bears are pulling down (35.7).

Starting sophomore forward Mitch Lightfoot along with 7-foot center Udoka Azubuike certainly helped the Jayhawks hold their own on the boards (15 combined rebounds, including 10 defensive), but Self continues to believe that KU's big man in the middle can and should dominate just about any game on the glass. It's all about if he wants to.

“To me, it's preparation,” Self said. “When Dok's mindset is right, he's fired up, he's thinking about the right things, he's terrific. But there's times it looks like that doesn't even exist. You don't even know that other Dok. … You can usually tell before practice, before the game. He's got to be more consistent. When he's turned up, he's definitely a force. He's a good rim protector, certainly a good ball screen defender, a pretty good defensive rebounder. When he's not, he just looks slow to me. We know he cares. We know he wants to. I attribute that probably to youth as much as anything.”

The Jayhawks played with fire and got away with it a little during the first meeting between these two teams, letting BU point guard Manu Lecomte get up eight 3-pointers but make just one of them. Had he hit even two or three more, the Bears might have walked out of Lawrence with a win.

With everyone but Lecomte on this Baylor team, that strategy might be the way to go in this one.

Because Baylor gets such a high percentage of its points off of 2-pointers — and are more comfortable shooting them — the Jayhawks' best plan of attack, defensively, would be to help and sag hard in the paint and dare the Baylor shooters not named Lecomte to fire away from behind the arc.

For as long as he's been there, Baylor point guard Manu Lecomte has commanded a ton of attention from any team he has played and the Jayhawks have been no different.

A year ago, Frank Mason III did his best to study the former Miami transfer's every move in order to try to contain him. And this year, that responsibility has fallen on the shoulders of Devonte' Graham.

In the first meeting between these two teams, Lecomte had one of his worst games of the season for 30 minutes and then flipped the switch and took over, nearly winning the game for the Bears in the final 10.

In 37 minutes, Lecomte shot just 3 of 12 from the floor, including 1 of 8 from 3-point range, tallying 10 points, three assists and three turnovers. His floater in the final seconds that would have given Baylor a late lead just missed and so many of those 3-point shots that missed simply rattled in and out.

Lecomte not only leads the Bears in scoring at 16.8 points per game, which is fourth in the Big 12, but also ranks fourth in the conference with 3.1 3-point makes per game. Not surprisingly, Graham (17.5 and 3.0) is right there with him in both categories.

Both players also take on a huge role as defensive stoppers and are among their team's leaders in assists, steals and free throws. Because of that, both players have had a ton on their plates all season and that certainly will not change today when facing off against one another.

Tied atop the Big 12 Conference standings with a red-hot Texas Tech team that has already beaten them, the Jayhawks are on the brink of entering the most important stretch of the 2017-18 season.

After today's game at Baylor — the Jayhawks have won 11 straight over the Bears and 16 of the last 18 — Kansas will play a four-game stretch that includes road games at Iowa State and Tech, book-ending home games against West Virginia and Oklahoma. Survive that stretch and a 14th consecutive Big 12 title will be looking good.

In order to get to that point, however, the Jayhawks still have to survive today. And recent history shows that might not be all that easy. In addition to barely coming out on top in Lawrence, with a 70-67 victory two weeks ago, the Jayhawks have won their last three trips to Waco by a combined total of nine points — 56-55 in 2015, 66-60 in 2016 and 67-65 last season. In addition, the last five meetings between these two all have been six-point games or tighter.

Despite the fact that Las Vegas has the line for this one set at pick 'em, the Bears have reached the point of desperation and may be running out of opportunities to bolster their bubble resume for the upcoming NCAA Tournament.

A win over KU would add more than a little shine to that case. A loss would drop the Bears to 14-11 overall and all but end their hopes for reaching the NCAA Tournament without winning the conference tournament.

I must admit today's typo gave me a chuckle. KU is now 19-35 Overall this Season! It has certainly felt like a long, long season already! Rock Chalk!

Tough stretch of games coming, have to focus on them one at a time!

This year we just maybe a good road team. Hopeful we can pull a win at Baylor today.

With a KU and KSU wins today, good chance to take sole position of the conference lead

Must add, considering we have back to back road games, I would consider today's game as MUST win.

Really can't see us lose at Baylor and then have to go to ISU, followed by a home game against a tough WV team.

Will need all the help we can get at this point.

Regardless of how they defend, either hard guard the 2pt shots, it seems EVERYONE shoots well from 3, so they have to be more aggressive on switches and getting through screens, something they've not done very well lately.

another tough game that probably will go down to the wire. I give us a 50-50 chance.

I wouldn’t say we’re on the brink of the most important stretch, I’d say we’re there. With the way Tech is playing, every game is a must win.