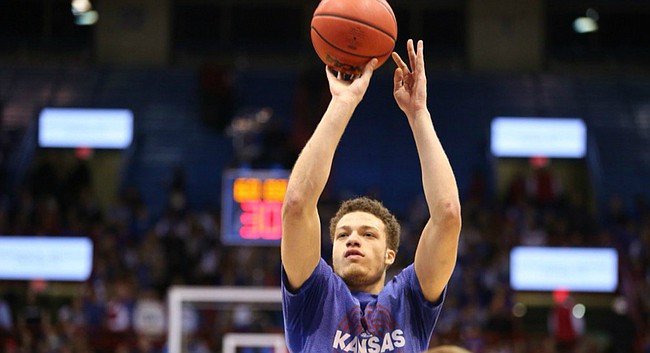 A report is expected to be forwarded soon to the Wabaunsee County District Attorney’s Office for consideration of charges, according to Lt. Adam Winters of the Kansas Highway Patrol. 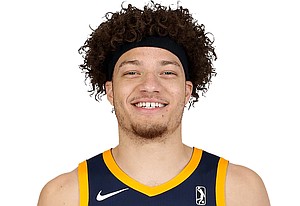 Former KU guard Brannen Greene, 23, was arrested Feb. 3 following a traffic stop for allegedly speeding on Interstate 70 in Wabaunsee County. During the stop, according to Winters, police discovered that Greene lacked a valid driver’s license and registration and was in possession of a “larger amount” of marijuana than a “simple possession” charge would carry. He was then arrested on suspicion of distributing the drug. Winters said he did not know how much marijuana was allegedly found in the car.

Greene was booked into the Wabaunsee County Jail following the incident and reportedly bonded out the next day.

Greene, originally from Georgia, played at KU from 2013 to 2016. He entered the 2016 NBA Draft after his junior season but was not drafted. He last played for the Salt Lake City Stars of the NBA’s G-League in November 2017.

Greene is a loser. He was a loser when he played at KU too, getting into it with Coach. He sucked and was full of himself, I'm sorry our program wasted so much time and resources on him.

It's so unfortunate he didn't really take advantage of the gifts and opportunities his abilities afforded him. I wonder if he tried to play overseas? Could he not get on with a team somewhere? Anywhere? If he was allegedly reduced to dealing weed, then he has really fallen far.

How many chances do you think we should give this clown? Good riddance. He was a terrible teammate, a continual embarrassment to KU. Not a Jayhawk. Move along druggy boy.

Brad - When you said "grows from it" I initially missed the "from" and thought which state are you suggesting he move to?

It would seem that this might shed more light on the decision to leave early. Maybe not {shrugs}.

Hopefully other players aren't judged by the same light though that does seem to be the case too often.

Maybe there's a message for other wanna-be G League players. In order to support your lifestyle, you will probably need to work two jobs. What an egomaniac clown and one trick pony basketballer. Just maybe he got the shun-treatment and his scholarship was yanked; cause he was surely not NBA ready when he departed. All those who still love him, get those care packages ready and addressed to Lansing Prison. LOL

I always wondered what happened to Greene after the car he was riding in exploded. Now I know.

Maybe this is why he was such a streaky shooter and poor defender while at KU, because the lettuce messed with his perception of things.

What a waste of talent. 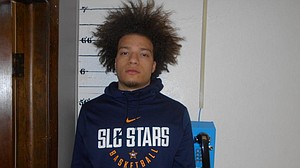 Gotta wonder what team would want this guy. Breaks the rules, argues with coaches, garbage on and off the court. by Bill McGovern

I would the Mormons won't want him back.

Sorry, "insert" guess, after would.

I was always taught if you can’t say any thing nice than don’t say anything. These comments are embarrassing to an 1988 alum myself. Please show some class and stop kicking someone when they are down.

Caught speeding, no driver's license, expired registration and bulk mary jane in his vehicle. Just maybe he deserves a good kick somewhere! Jeff, you should become his defense counsel. You are probably a white Republican...which describes all the voters/jurors of Wabaunsee County. Besides, what's so special about a 1988 alum?

Guess that explains why you haven't made a comment in over 2 years...

In today's world of legal marijuana, unless he was caught selling the weed, not much will happen. I don't know if he received his degree or not, but now would be a good time to finish it and move on with a non-sports life. Life is way too short for everyone to waste your time on this earth up to no good.

Wrong. Kansas laws state that over 450g or more of marijuana is a felony that could result in 10-42 months of probation or a $100,000 maximum fine.

First-time offenders would probably get probation in some sort of fine. Still wouldn't want to walk into the wrong courtroom with the wrong judge.

In today's world of legal marijuana you better know which state you are in.

Marijuana laws are kind of outdated....its legal where I live...though my town has banned its sale ...which I agree with.....but the world is changing and Kansas should get with the program...lots of tax revenue could be realized...its helped my state a lot ....Marijuana distribution can mean a lot of different things...from small amounts to truckloads...i don't think Brannen was a major player...so keep it in perspective...he is a young kid...23 in this world is young...kids smoke dope...thats what they do....its been that way since the 60's....look for the good in people...its easy to throw them under the bus.

Never knew why Self played Greene over Andrew White lll.