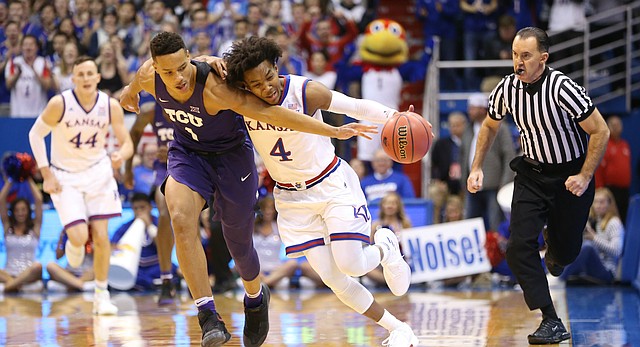 Kansas guard Devonte' Graham (4) picks off a pass to TCU guard Desmond Bane (1) during the first half on Tuesday, Feb. 6, 2018 at Allen Fieldhouse.

No victory is guaranteed or a foregone conclusion this season in the Big 12 — not even inside Allen FIeldhouse.

With Udoka Azubuike, Devonte’ Graham and new sixth man Lagerald Vick (30 second-half points between them) leading the recovery, the Jayhawks shot 11 for 21 from the floor in the final 20 minutes to close out the victory and avoid a fourth loss inside Allen Fieldhouse this season three days after dropping one at home to Oklahoma State.

Graham (24 points, five assists, six rebounds) reached 20 for the first time since Jan. 13 to lead Kansas (19-5 overall, 7-3 Big 12) and help his team maintain its spot atop the Big 12 standings, where the Jayhawks are tied with Texas Tech in the loss column.

Azubuike delivered his first double-double since the league opener at Texas, with 16 points and 11 boards versus TCU (16-8, 4-7).

Both Lagerald Vick and Marcus Garrett contributed 10 points off the bench.

• The game turned when: KU made a point to seek out the best shots available.

The Jayhawks made just 13 of 34 shots in the first half but recovered from a halftime deficit and held off the Frogs by getting layups, dunks and good looks at 3-pointers in the second, when they shot 52.4 percent.

Kansas got by at the foul line, too, with 12-for-17 free-throw shooting in the second half. Graham and Newman sealed the win in the final 15 seconds, combining to make 4 of 4.

• Offensive highlight: When a 21-percent 3-point shooter knocks down multiple shots from downtown it qualifies as a wow moment.

Entering the game, KU freshman Marcus Garrett had connected on just 6 of 28 3-pointers all season.

And though he gave his first good look from deep a moment of thought before firing, he made his first trey from the left corner off a Malik Newman dish in the first half.

Garrett, who came in a 1-for-7 long-range shooter in Big 12 play, wasn’t done there. He spotted up in the right corner early on in the second half and didn’t hesitate to knock down another one when Vick set him up.

His second make from beyond the arc gave KU a four-point lead in a tight game during which the Jayhawks trailed by as many as seven in the first half.

• Defensive highlight: TCU big Kenrich Williams put himself in position for an easy put-back on an offensive rebound late in the first half when Mitch Lightfoot decided he wasn’t having it.

When Vlad Brodziansky’s touch shot in the paint was off the mark, Williams read it the whole way and snagged the miss. After pump-faking one KU defender out of his way, Williams rose up only to be met at the rim by a helping Lightfoot, who easily blocked it.

The sophomore, making his first career start, gave KU the kind of activity coach Bill Self trusted he would.

Newman picked up the defensive rebound and Lightfoot’s defense led to a rare fast-break chance. Graham drew a foul and made both free throws to cut TCU’s lead to 35-32 1:16 before halftime.

It was the second time in the game two potential second-chance points were erased inside by a KU big. Udoka Azubuike did the same earlier.

Lightfoot came through with some even more impressive rim protection early in the second half by smacking a Brodziansky two-handed dunk attempt away at the rim.

In the first half, TCU’s marksmanship helped get the Frogs out in front, as they drained 8 of 15 before taking a 36-34 lead into halftime.

Kansas hit just 4 of 15 in the first half, when Graham was the only Jayhawk in rhythm offensively. The senior point guard made 3 of 6 in the first 20 minutes, giving him more than two 3-pointers in a game for the first time since he helped the Jayhawks win at West Virginia, on Jan. 15.

In the second half, KU focused more on getting the ball inside, via drives or entry passes to Azubuike. The Jayhawks made 3 of 6 3-pointers after halftime, with Graham adding two more from behind the arc.

But the real victory in the category came defensively, as TCU only made 2 of 10, and Kouat Noi, who buried four 3-pointers in the first half, went 0 for 5 in the final 20 minutes. 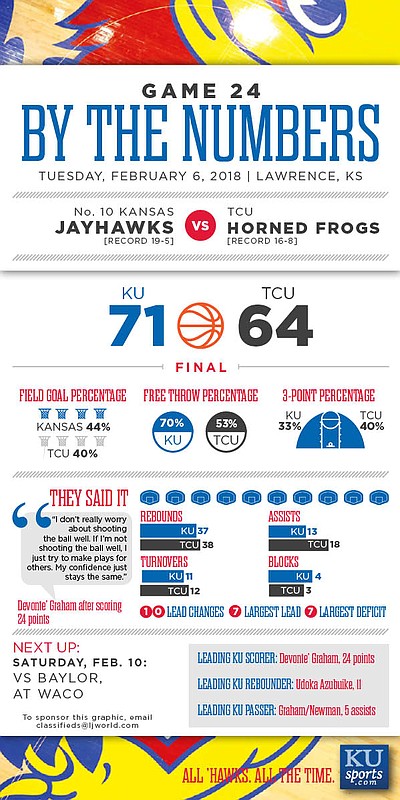