Kansas guard Lagerald Vick (2) lunges to defend against a three from Oklahoma State guard Jeffrey Carroll (30) during the second half, Saturday, Feb. 3, 2018 at Allen Fieldhouse.

Kansas looked more foggy than Phoggy from the start Saturday in trying and failing to stave off a 21st-century first.

Oklahoma State took it to the Jayhawks, 84-79, leaving the home team with its third loss in Allen Fieldhouse — something that hasn’t happened since the 1998-99 season.

Arizona State was the first, Texas Tech the next to leave the building, which has come to be known as college basketball’s greatest home-court advantage, victorious.

Kansas didn't give the spectators much cause to holler away the morning sluggishness. For the entire first half, the Cowboys looked more alert, quicker, more ready to play an 11 a.m. basketball game. 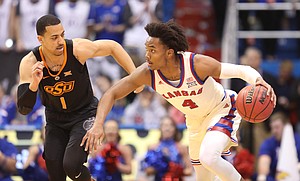 Oklahoma State took a 46-33 lead into halftime. KU is better than the Cowboys, but not 14-points-in-one-half better than anyone from a Big 12 that has a stronger bottom half than in most seasons.

Why didn't Kansas come out with more sizzle?

“I think we get a little comfortable,” Kansas guard Malik Newman said. “We came out lackadaisical, not playing with much energy or effort. We dug ourselves a hole and it was hard to dig out of.”

Nothing gets the Allen Fieldhouse crowd going quite like watching the home team end fast breaks by throwing down lobs or nailing open 3-pointers. It didn't happen because it’s impossible to finish a break without starting one. Most of them start with defensive rebounds, and those were in short supply for the Jayhawks.

Discounting the two rebounds that came on missed free throws, KU had just eight defensive boards in the first half, compared to Oklahoma State’s 13 offensive boards.

“They had 22 in the first half,” Self said of second-chance points. “That is the least competitive (rebounding) that I have ever seen. They got a couple of rebounds where we just walked away from it and gave them uncontested baskets.”

Not all of those were in the first 20 minutes.

One came late in the second half, when Lagerald Vick didn’t make an effort to block out. It’s come to the point now with Vick that it’s tough to watch him without wondering where the player so eager to put his freakish athleticism to work early in the season has gone.

Vick spent 34 minutes on the floor and turned that into just five points, three rebounds and one assist without a single steal. He made 2 of 10 shots, 1 of 10 3-pointers.

What is the source of the decline?

How do you get out of it?

“I don’t know,” Self said. “Worry about the right things maybe; worry about defending and rebounding and doing little things that add up to teams winning.”

Nobody has given up on Vick, but the search party continues for the player who looked so good in so many ways in November and December.

Self keeps going to him, too, because his options are limited. Vick has the most potential of the four guards in the starting lineup to rebound like a forward, but it's not happening.

He was far from alone in having an off day, but he remains the biggest mystery on a team that dropped into a first-place tie in the Big 12 standings Saturday. 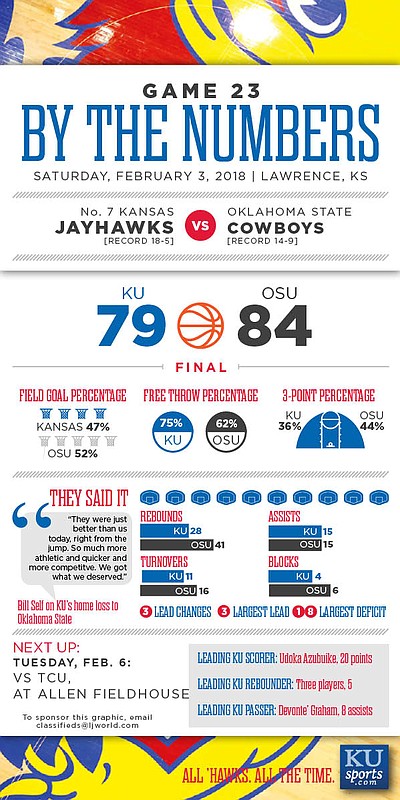 I read the article earlier in the week that we should just get used to the seven man rotation. This game makes me really question the wisdom of that approach. This team needs an infusion of new players to provide more options in the post season. Why won’t Self show the same patience with De Sousa and Cunliffe that he’s showing with Vick. It might pay off big time in March.

This is where Self's stubbornness drives me nuts...Vick should probably spend a couple of games not starting. He's probably my favorite player, but Self needs to shake things up and if I recall correctly that's what he did with Newman and it's worked out pretty good. It was an easy call with Newman because he hadn't been playing well at all, unlike Vick who started the year playing pretty well and has since gone downhill. So that might be why Self doesn't want to bench him, but aside from possibly motivating Vick we actually need someone coming off the bench with some capability of scoring, which we don't have right now. Marcus and Mitch are not scoring threats. So when a starter goes to the bench we lose scoring. Wouldn't it be nice to have someone of Vick's talent coming into the game when the other team is subbing out their best players? He could still end up playing 30+ minutes, but maybe he just needs to experience the view from the bench at few times at tip off to get him going....just my 2 cents.

De Sousa and Cunliffe could have helped the Jayhawks lose by twenty.

Then Missouri earned it's first-ever win over Kentucky.

Can this weekend possibly get any worse?

I don't care what Missouri does anymore, but I love it when UK loses.

I agree Bill, I know Vick is in his 3rd year and coach may feel more loyalty to him or something because if Newman or Cunliffe were playing like Vick they would be on the bench in a second. It's very frustrating to watch.

Bryce, I had my appendix taken yesterday. It can definitely get worse

Robert, my comment about De Sousa and Cunliffe didn’t say anything about winning this game. It referred to it paying off in the post season. Nothing silly at all about the argument.

Vick has just disappeared. I'm sure coach is betting on him getting his mojo back at some point, or at least quicker than it would take a bench player to take his spot.

The source of the decline at home and hit or miss efforts is very simple. No Bench. A small handful of guys having to carry all of the burden every game and play 35+ minutes game in game out. This team very well may go on to win the conference and go on a run, time will tell, but any failings they have are 100% on continued failures in recruiting by this staff. He knows it too, you can see, he's not willing to get on these guys like he typically would because he knows the position he has put them in.

There must be something mentally severely wrong with this team. It’s very rare to see a Kansas team play with such low energy. When they choose to do that again at home in front celebrating 120 years of Kansas basketball...all those players representing so much glory.....something is a miss.

I have no idea what Self and the coaches can do about it but something needs to be done. I suggest putting Vick on the bench, maybe.