While much of the buzz surrounding the Kansas football program this past week focused on the commitments and signings Les Miles and his staff were able to land for the Class of 2019, KU’s coaches also put in some work for the extended future of the program.

Even as many high school and junior college prospects were signing their national letters of intent for next season, other prospects picked up offers from Miles and the Jayhawks — both for 2019 and 2020.

In some cases, KU’s new coaches simply established with younger recruits who had been offered a scholarship by the previous coaching regime that Miles and his assistants were still interested.

A 6-foot-6, four-star offensive lineman according to Rivals, Corcoran tweeted out on Wednesday that he had been re-offered by KU. Corcoran mentioned Miles, offensive coordinator Chip Lindsey and offensive line coach Luke Meadows in the post.

Corcoran is considered one of the top offensive tackle prospects in the nation, and previously picked up offers from many marquee programs, including Auburn, Clemson, Michigan, Notre Dame, Nebraska, Georgia and others.

Similar to Corcoran, a tweet came out Wednesday from Ky Thomas, an all-purpose running back from Topeka, announcing KU’s interest.

Rivals rates the 5-11 Class of 2020 prospect from Topeka High as a three-star recruit.

Hayden Pauls, a three-star offensive tackle from Emporia, tweeted Thursday he received a re-offer from KU, as well.

Here’s a rundown of some other recruiting targets who recently received scholarship offers from KU:

The defensive coordinator at Tulsa the past four years, former KU football D.C. Bill Young announced his retirement this week. 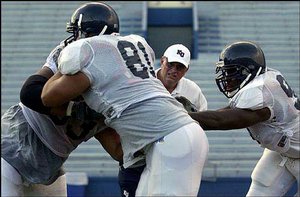 KU Defensive coordinator Bill Young gets a close look at his linemen during practice. Kansas has revamped its line after giving up an average of 256.2 rushing yards per game in 2002.

Young worked for head coach Mark Mangino at Kansas during one of the most successful stretches in program history.

“Coaching has been good to me, a great experience,” Young told the Tulsa World. “I can’t imagine doing anything else and having enjoyed it as much. I started off as a high school coach, then worked my way into college. It’s been fantastic. I’ve had the opportunity to work with some unbelievably good coaches and people. I think a little bit of all of them rubbed off on me, and hopefully helped me become a better coach.”

Through the years, Young also worked at Oklahoma State, Miami, USC, Ohio State and Arizona State, as well as with the Detroit Lions.

Glad to see Miles n Co. are still working hard and looking to establish a strong class next year. Get in early on these recruits and establish strong relationships.

Did this site report that the younger Dineen brother (Jax, I think) committed to K-State?

I didn't see it reported here. In fact, the comment I saw here (early) was that Jax and Keenan Garber (?) both had not committed. I did subsequently read (later) in the TCapital paper that they both signed with KSU.

Hoping KU Football leads to players haveing Max Fun. If it is not fun, why do it. I love HCLM saying he is having as much fun as is legally possible!

Ky Thomas would be an excellent get for Coach Miles.

Joe I am very disappointed by Jax Dineen's decision, but then it might just be a brother wanting to do something different kind of thing. We all remember the Rush brothers, Roy Williams tried to get them to come to KU, but no way. One went to UCLA, one to Missouri, and finally,thank the good Lord, Brandon came to KU.

I noticed that out of the top 10 football recruits in the state of Kansas, KState got 2 and KU got 1. 7 out of 10 went out of state. That is very bad, and we need to get at least half of the best the state has.

We need to go after one of the Locketts

Garber had long been committed to KSU and Dineen had been heavily recruited by NDSU. That was going to be a major uphill battle for Miles and staff. Barber and Dineen are both purple pussycats now, so why talk about them? Instead of focusing on who we didn't get, it's time to focus on who we did and who we might get either in this class or going forward. We've got ten new Jayhawks committed to making this program strong, it's time for fans to show the same commitment, get tickets and start donating.

When Miles arrived, he was literally starting from ground zero, so I am massively impressed at what he accomplished in such a short time. Fans will look back at this in a year or two and say - how on earth did he land ten recruits in three weeks out of thin air? And with an average player rating higher than K-States?

One take on the remaining five scholarships is that we may actually have an advantage over other programs in filling gaps with the few remaining players available. We have definite "play now" opportunities, we have an established staff and some time to create relationships with some players. I think Miles will be able to add at least 2 or 3 sound additions to the team for February, and then this class will look even more impressive.