Kansas guard Charlie Moore (2) looks to dish as he is defended by South Dakota guard Stanley Umude (0) during the second half, Tuesday, Dec. 18, 2018 at Allen Fieldhouse.

It’s safe to say Lee’s scouting report didn’t include anything about denying KU backup point guard Charlie Moore the opportunity to spot up from behind the arc.

“He hasn’t shot it,” Lee said afterward, somewhat in disbelief.

Indeed, Moore had connected on just 13.6 percent of his 3-pointers through nine games.

But Game No. 10 revealed that Moore’s teammates hadn’t bended the truth all those times they insisted through the season’s first several weeks that the 5-foot-11 reserve from Chicago actually was one of the team’s best shooters. 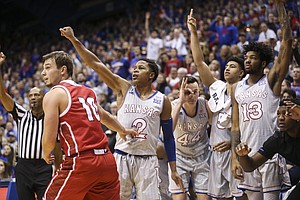 “I thought I just had confidence,” Moore said of the difference Tuesday night, after producing single digits or going scoreless (twice) in his first nine games of the season. “When I got the ball, I wasn’t hesitating. And my teammates were telling me to shoot the ball. They gave me confidence to do so, and I think they helped me out a lot.”

Remarkably, his 3-for-22 start to the year from 3-point range neither rattled Moore, a redshirt sophomore transfer from Cal, nor his teammates.

“He struggled a little bit, but he’s had a great attitude the entire time — kind of like Dave,” Lightfoot added of KU freshman big man McCormack, whose 12 points helped Kansas tally a season-best 40 bench points. “(Moore’s) just been waiting for his opportunity to strike and he did it. We all know he can score because he does it in practice. He did it all last year on the red team (in practices) against great players like Devonte’ (Graham) and Malik (Newman), Svi (Mykhailiuk). So we know he can do it, and he showed you guys that tonight.”

Even if no other substitutes had scored for Kansas (10-0), Moore’s 18 points would have served as KU’s new team season-high for bench scoring, with the previous being 17 against Tennessee.

The Jayhawks need a sixth man who can score with consistency. Head coach Bill Self hopes that man is Moore, who once upon a time put up 38 points against UC-Irvine when he played at Cal.

“That’s what we thought all along, that he was going to be our marksman off the bench, so to speak, and give us some offense,” Self said after Moore doubled his previous top scoring output at KU (9 points versus Tennessee). “It hadn’t happened yet. But tonight, it did. Hopefully, that’ll give him some confidence moving forward shooting the ball, because he and Lagerald (Vick) can shoot it at a different level than anybody else can, and we see that every day in practice. So that doesn’t surprise us.” 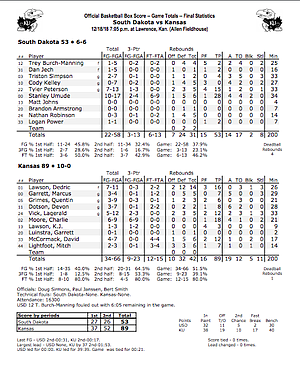 It was a revelation for those who don’t know what transpires behind the closed doors of KU practices. Including USD’s coach.

“I told him afterwards, I’m glad he figured it out,” Lee said after his team dropped to 6-6. “Hopefully, he keeps shooting the ball well.”

Moore looked like a different player against the Coyotes, not only knocking down shots, but pushing the ball in the open floor, and setting up teammates, with a season-high four assists. His alley-oop pass from the right wing to a cutting Vick delivered the most ruthless slam of the night. Two possessions later, Moore’s 3-pointer from the opposite side of the floor pushed KU’s lead to 30.

Even when he lost the handle on a would-be lob to McCormack — Moore said he got hacked on the arm in the process — it ended up safely in the big man’s hands, and McCormack gathered for a dunk.

The backup guard’s offensive impact was undeniable, as his 15 second-half points helped a 10-point halftime lead balloon to as many as 37 points by the game’s final minutes.

As the Jayhawks have proven in their 10-0 start to the season, there isn’t anyone they can rely on offensively with any consistency other than Dedric Lawson and Lagerald Vick.

Now that Moore has shown the public the type of player he has been when the cameras aren’t on, he’ll need to keep giving KU a spark off the bench.

He never wondered through November and the first couple of weeks of December whether his shots would start connecting.

“Tonight, the ball happened to fall,” Moore said with confidence.

Moore showed his range (30 feet and in) during the Italy exhibition games in the summer of 2017, so many thought he would be KU's best outside shooter, including me, when he became eligible to play. Last night is what many expected and his shooting is essential given few KU players outside of Vick have shown a propensity to hit consistently from long range. Overall, outside of Lightfoot in the first half and McCormack and Moore in the second half, the team did not look worthy of even a top 25 ranking against an undermanned South Dakota.

1] I know, I know...everyone is probably a little dismayed at the lack of focus against an undermanned opponent, but...come on.....the Hawks almost doubled the score on the Coyotes and The Bench got the exposure it needed.

2] I admit, however, KU plays like that at ASU... goodbye winning streak.

4] This next game, which is the last game before Christmas, is always a trap game. With everybody looking forward to the holidays, weird things can happen. I still remember sitting in disbelief watching a great Ryan Robertson team losing to his little brother and St.Louis University!!!

5] Silvio, we hardly knew ye. Something tells me he may move on thanks to the NCAA's lack of fortitude and competence.

I would hope that, after last year's embarrassing loss to the Sun Devils, the Jayhawks will be much more focused and looking for revenge.

Has anyone noticed how youthful Charlie Moore looks? He could be like Devonte Graham, the next "baby-faced assassin"!