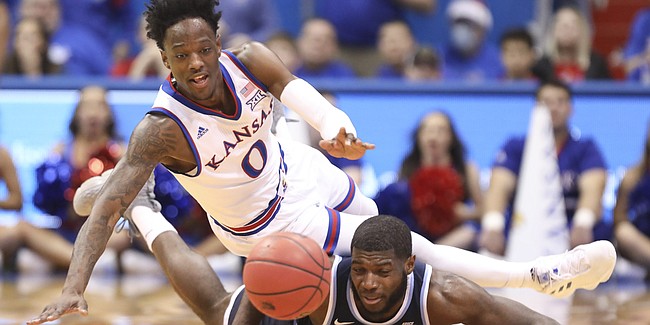 Kansas guard Marcus Garrett (0) falls over Villanova forward Eric Paschall (4) after knocking away the ball during the first half, Saturday, Dec. 15, 2018 at Allen Fieldhouse.

The last time Kansas and Villanova met before Saturday, back in March at the Final Four in San Antonio, the Jayhawks had plenty of Villanova players to focus on.

In the rematch, a 74-71 dog-fight victory by top-ranked Kansas at Allen Fieldhouse, there was one Villanova player who stood out above all others.

And Bill Self put his best defender on him.

Despite giving up three inches and roughly 50 pounds to Villanova senior Eric Paschall, KU sophomore Marcus Garrett did what Self said was “a fabulous job on Paschall” on the defensive end.

Foul trouble limited Paschall to 33 minutes — his season average — during a game in which he might otherwise have played all 40. And he played just 14 minutes in the decisive second half, attempting three shots and failing to grab a single rebound.

“After Paschall got going (early), I thought (Garrett) was terrific on him,” Self said after the victory. 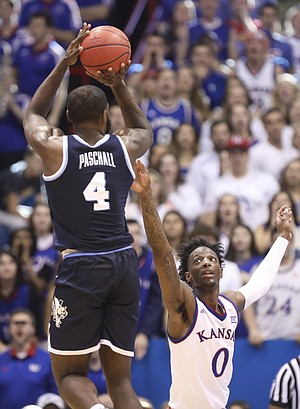 Villanova forward Eric Paschall (4) elevates for a shot over Kansas guard Marcus Garrett (0) during the second half, Saturday, Dec. 15, 2018 at Allen Fieldhouse.

The 6-foot-5 sophomore’s success against one of the nation’s toughest covers was largely the result of a week’s worth of work.

Throughout the days between KU’s win over New Mexico State at Sprint Center on Dec. 8 and Saturday’s win over Villanova — KU’s third Top 25 victory already this season — Garrett studied Paschall’s game on film, from all angles and all seasons.

Wherever Paschall went, Garrett was not far from him. During one possession in the second half, when KU freshman Devon Dotson found himself caught on Paschall after a switch, Garrett recognized it, worked his way over to Dotson and quickly passed off his man to Dotson so he could get back on Paschall, all within the flow of Villanova’s possession.

It’s plays like those, along with his ability to force Paschall into 4-of-10 shooting while recording four steals and a block, that had his teammates highlighting Garrett’s key contributions after a victory that featured a 29-point outburst from senior Lagerald Vick and yet another double-double (28 points, 12 rebounds) from KU junior Dedric Lawson.

“He was great defensively,” Lawson said of Garrett’s day. “When we look at the stat sheet, we see he had one point, but he does so much for this team and he’s so valuable that it really doesn’t go unnoticed.”

Like Lawson, Self marveled at Garrett’s four steals after the victory, saying, “Everybody will talk about those three (Dotson, Lawson and Vick), but we (also) have Marcus Garrett. The way our guys competed defensively all day was tremendous.”

Asked how he was able to pluck so many steals from a team known for taking care of the ball, Garrett briefly explained his thought process on defense.

“It’s just like watching film,” he began. “When I see the ball in front of (my man), I basically just try to reach. Most of the time, when the offensive player catches the ball, they’re not really holding it tight, they’re trying to run a play. So I just try to get my hand in there.”

For a team with so many options on offense and so many potentially different looks with the lineup, Garrett has quickly become one of the Jayhawks’ most important players.

Inserted into the starting lineup because of the ankle injury to starting center Udoka Azubuike, Garrett’s ability to play four positions and be this team’s lock-down defender has endeared him to his head coach, who places extreme value on versatility and toughness.

“He’s a good player,” Self said of Garrett. “If he had a consistent (shooting) stroke, he would be our best player; I mean, all-around player. He can play and he’s got fast hands and he’s tough and does all the right things.”

Marcus is a hell of a defender. There’s also no excuse to be such a poor shooter at this point in his career

Instead of threes, perhaps he should try 15 footers or drive to the basket.

Phil - What elite knowledge is the "no excuse " comment based on.

The world is full of people that can't shoot, and I'm certain he is still vastly better than all but an elite few. It just stands out in this case because he does so much else so well.

No, it stands out because he sucks at shooting for a college guard. At some point you have to make shots and he just can't do it. We heard how much he improved over the summer, but the results aren't there.

Does it stand out to you also that most college players can't defend?

NO doubt Garrett's lockdown D has been great (he boxes out his man, too - something others haven't really done very well at). If only he could turn all those steals into buckets. That's what he needs to improve. He also needs to develop that quick bounciness. He received a nice pass on the way to the basket but decided to kick out - WTH? Why bother going inside if you don't want to attack the basket. Just a quick floater would do. A quick floater. A very effective offense when you're close to the basket. Garrett needs a bit of coaching on offense real bad. All he needs is a repetition, some jumping exercises (jump-roping is the easiest).

I think just about anybody would be please with Garrett becoming about as good a shooter as Travis Releford. He's an even more versatile defender than Travis was so if he can knock down his three with a bit more consistently that really opens up the rest of his games as well. It's a lot harder to drive to the rim when the defense has no respect for your three ball and can sag off and clog the lane. There's probably a good reason he keeps getting open threes.

He shoots 3s as if he's doing a floater, that's why I think he can try going inside more. If he shoots 3s like Charlie (or, yes, Curry), by twitching his wrist, that's probably a better mechanic.

Every time Garrett makes a steal, that's a point. Every time his man shoots 4 for 10 instead of 8 for 10, that's eight points. Every time his man shoots 10 times instead of 14 times, that's four points. And that's not to mention contributions through help defense and rebounding. Defense is just as important as offense, and this kid is a great defender. I cut him some slack on offense, just as I'd cut a great scorer some slack on defense.

And to your point, good defense produces transition offense which helps create a faster tempo if that’s what you want. Prevents the defense from setting up which allows for more easy baskets.

Oh, do you think Garrett wouldn't want to become a better shooter? He helps coach win, coach helps him to be a better player. It goes both ways, team wins more. I hope you all don't underestimate his potential as a shooter/slasher. I'd cut him some slack on missing shots, missing layups, getting rejected. But I would pressure the coaching staff for not pushing Garrett to his full potential.

I guess you agree with coach BS, too:

“When we recruited him, we recruited him to be exactly what he’s been. We’d like him to be a 40 percent three-point shooter right now, but that’s not going to happen, at least at this stage of his career. The things he does in other areas are probably more valuable than him being a prolific scorer for us."

Love his potential for giving us 4 full years of lockdown defense.

Some amazing critiques from the lazy-boy gallery.

Dedric and LaGerald basically carried the load for us on offense on Saturday, but do we win that game without Marcus' defense? Probably not. Marcus may not be good at getting the ball in the hoop; but I can live with that as long as (A) he's impacting the game in other ways and (B) the team continues winning.

Even going back to last year Garrett got playing time and wasn't jacked out when he made a poor play. Just maybe his offense will improve and he becomes a great player. Be interesting when Udoka returns who will not start.