When Kwahn Drake decided to follow defensive coordinator D.J. Eliot from Colorado to Kansas, the Jayhawks’ new defensive line coach signed a four-year term sheet worth a maximum of $1.47 million.

While the first two years of the deal are guaranteed, KU holds options on the back half of the agreement, for the 2021 and 2022 seasons. 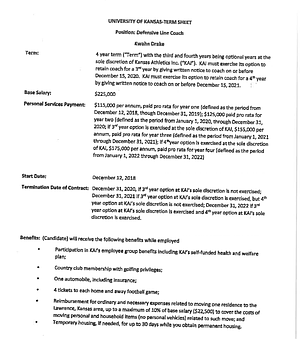 According to USA Today’s list of assistant coach salaries for 2018, Drake made $200,625 this year at Colorado, his first with the program.

The terms of Drake’s deal with KU state Kansas Athletics would be owed nothing if he left the program to become a head coach at either the FBS or FCS level.

However, if he were to leave to coach elsewhere in any other role, the buyout would be $225,000 during not only the two guaranteed years, but also the final two option years.

If KU were to fire Drake without “just cause,” he would be owed his remaining base salary, via release payments over the course of 12 months. 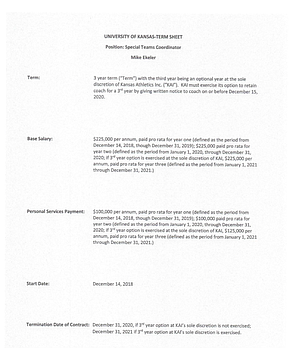 Kansas Athletics holds the option for the third year of the deal, which must be exercised on or before Dec. 15, 2020.

Ekeler will be paid a base salary or $225,000 in each year of the deal, including the third if KU exercises its option.

Ekeler can opt to leave KU without Kansas Athletics being owed any money if he takes an FBS head coaching job or is hired as a defensive coordinator “with play calling duties” in the AAC, ACC, Big Ten, Pac-12 or SEC.

However, if Ekeler were to leave for any other coaching role, KU would be owed:

Should KU choose to terminate the deal without “just cause,” Ekeler would be owed the sum of his remaining base salary and “personal service” payments, in installments over the course of 23 months.

If Ekeler is the special teams coordinator, does that mean he doesn't count against the total # of coaches?

All of the other comments disappeared. There was good info and generally positive comments.

Where in the hell is all of this money coming from...unlike the US Government can't print its own money, I certainly hope success and more income follow soon or KU Athletics will be broke.

Universities never run out of our money, sir.

John, I mentioned the same thing when Beaty was let go. Get ready for $100 general admission tickets.......or big boosters and alumni being asked to contribute big bucks