When D.J. Eliot decided this week to join Les Miles’ Kansas football staff as the defensive coordinator, Eliot signed a three-year term sheet through the 2021 season worth $1.85 million.

A USA Today list of FBS assistant salaries for 2018 showed that Eliot made $700,625 at Colorado, during his final year as the defensive coordinator and outside linebackers coach. At KU, his contract will pay him, on average, about $616,666 a year. 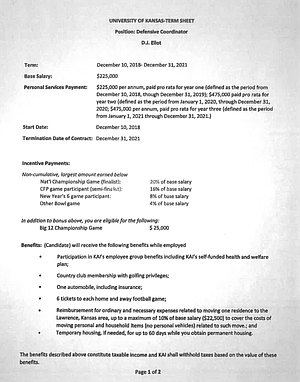 Just like the terms agreed to by KU offensive coordinator Chip Lindsey, Eliot’s deal includes incentive payments, such as $25,000 for the Jayhawks playing in the Big 12 title game.

The other postseason incentives are:

Those four scenarios are noncumulative, so he would receive payment of just one bonus if multiple incentives were achieved in the same season.

If Eliot were to leave KU for another job before his deal expires on Dec. 31, 2021, he would owe nothing if he did so to become a head coach at an FBS program.

But if he left for a nonhead-coaching job, Kansas Athletics would be owed:

If KU were to fire Eliot without “just cause,” he would be owed the sum of his base salary and personal service payments, with “release payments” to be paid over the course of 23 months from the termination date, “or the otherwise unexpired term of the contract, whichever is longer.”

The day after Eliot signed on with KU, Emmett Jones became the fifth official hire for Miles’ first staff.

While Jones’ term sheet is for four seasons, Kansas Athletics holds options on each of the final two years, for the 2021 and 2022 seasons. 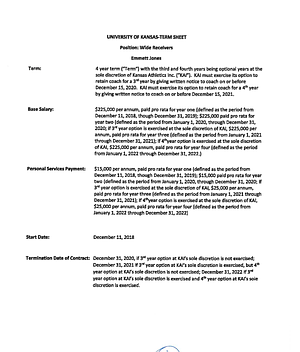 With a $225,000 base salary in all four years, Jones’ deal also includes “personal service” payments of $15,000 in each of the guaranteed years. That figure increases to $25,000 for both year three and four.

According to USA Today, Jones made $200,000 in 2018 at Texas Tech, during his third season as the outside receivers coach for the Red Raiders.

If an FBS program wanted to hire Jones to become its head coach while Jones remained under contract with KU, no money would be owed.

Should the deal reach the 2022 season through KU exercising its options and Jones left for a nonhead-coaching role before Dec. 15, 2022, the figure owed to Kansas Athletics would drop to $112,500.

You pay for what you get and I like spending money on these coaches. It will pay off!

So will Clint Bowen still be a part of KU football?

The only defensive group we haven't hired for yet is LB and safeties. It's possible that he could be named to one of those position coaches but me personally, I'd guess that he won't be back.

Interesting idea JZ. That would be a pretty drastic demotion from DC to ST but....I think he is a good position coach.....

I don't have any sources, I just think Bowen wants to stay in Lawrence that bad. He's coached ST before as well

What I don't understand is how we claim to be getting top notch guys because we will spend the money and then guys like the coordinators sign with us for less than their last spots. Doesn't seem like to me we are spending big dollars at all.

I was just getting ready to type that. Every coach, including Miles, is taking a pretty drastic pay cut to come here. Maybe that means they are buying into a delayed compensation mindset..."Come in now at this pay level, and when we start winning, and growing the program we will pay you MORE than you made before." Who knows.

Benton, can you get us a list of all the coaches from last year and new hires with their positions. I'd also like to see your thoughts on where last year's coaches might end up. Like maybe Bowen being ST coach, Sendish as safeties coach etc.