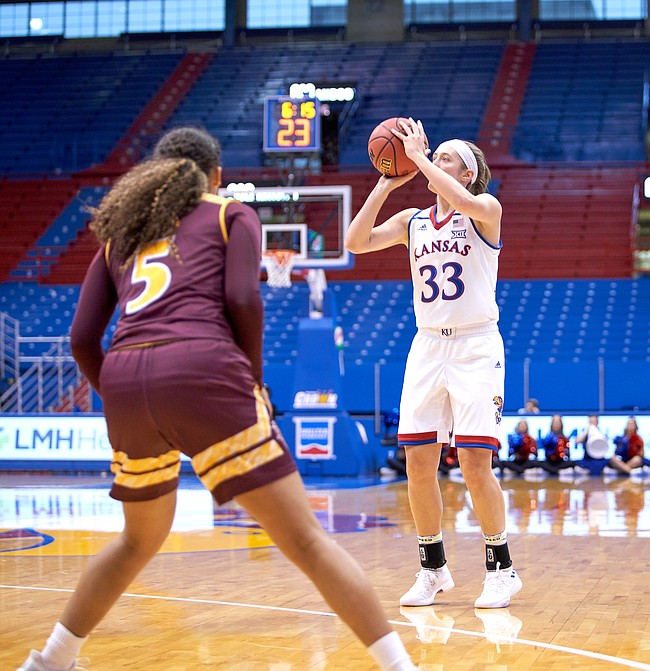 Nebraska handed the University of Kansas women's basketball team its first loss of the season by a 58-52 margin Wednesday night inside Pinnacle Bank Arena.

Double-figure scoring efforts by senior Kylee Kopatich and junior Mariane De Carvalho were not enough for the Jayhawks (6-1) to mount a come-from-behind win and keep their perfect record intact.

Entering Wednesday, Kansas was the only Division I program with both the women's and men's basketball team sporting undefeated records. Earlier this week, the Jayhawks had received votes in both the AP poll and coaches' poll.

Sophomore Bailey Helgren grabbed a career-high 10 rebounds during the contest, which marked the fourth-straight contest of the season of eight or more rebounds.

KU will play host to Grambling State at 2 p.m. Sunday.

That De Carvalho is legit!!!

I didn’t have any warm fuzzies on the Nebraska game. They own us in volleyball, and did in basketball. As these women continue to gel and improve, they need to start believing in themselves. There will no doubt be more highs and lows this year. It will be interesting to see how they react and play after a loss.

We are who we have always been.

Three of Nebraska's 5 losses are to top 25 teams in Drake, Miami and Louisville so they aren't quite as bad as their record shows. Nebraska isn't great either, but our team went ice cold from the arc and took a tough loss on the road.

I think it's too early in the season to determine what this team. They are 6-1 with the only loss to a power 5 team on the road.

Not sure the women are what they always have been but it sure seems that some commenters are, though it is nice to have a non-football visit from Joe.

Lots of season still to be played and development be had. Sure glad the players and coaches don't give up like some fans.