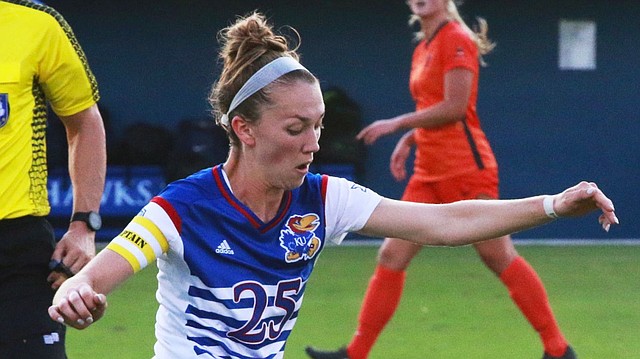 Senior forward Grace Hagan dribbles the ball at midfield during a match against Pepperdine on Friday, Aug. 17, 2018.

After winning possession on the opening kickoff, Hagan broke away and isolated herself with South Dakota State goaltender Maggie Smither. With slightly more than a minute off the clock, Hagan took the Jayhawks' first shot of the game. The ball beat Smither, but banged off the post.

The aftermath of that shot sent both energy and disappointment among the Jayhawks' front line. For the rest of the first half, Kansas played more aggressively, ultimately claiming a 3-0 victory over South Dakota State Sunday afternoon. Kansas (2-0) recorded two shutout victories at home over the weekend, joining the 2004 and 1997 teams as the only squads with a pair of clean sheets to start the season.

Sixteen minutes into the game, Katie McClure drew a corner kick after Kansas missed the previous four shot attempts. As McClure got ready for the set play, Madison Meador went to the box and found herself in the right place for the first goal of the game. 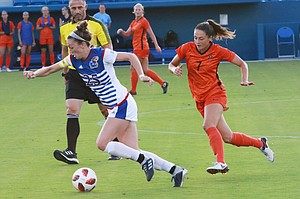 Senior forward Grace Hagan races past midfielder Katy Bryne in a match against Pepperdine on Friday, Aug. 17, 2018. The Kansas soccer team moved to 2-0 start to the season with a win over South Dakota State on Sunday.

“The kids have put the work in over the summer and made the commitment to being in town,” head coach Mark Francis said. “We were excited about the anticipation of the level of the group and they've shown that so far.”

Meador, a junior transfer center back from Ole Miss, scored on the fifth of the Jayhawks' 16 first-half shots. It was the first goal of her collegiate career.

"It was awesome. I'm not used to scoring, so it was just a really good feeling to be able to do it for my team," Meador said.

Even with a 1-0 lead at the half, Francis wasn't pleased with his team slowing down the tempo following the start of the match. Kansas’ offense was also taking really sloppy shots, as both Hagan and midfielder Miriam Melugin attempted a shot 30 yards away of the goal.

“I said we needed to score within the next 15 minutes,” Francis said.

It only took three. The first of two second-half goals came in the 47th minute from McClure (second of season, 13th of career) off a quick assist from Hagan.

With McClure subbed out for junior Taylor Christie and Hagan out for freshman Samantha Barnett, the pair of forwards off the bench notched a third goal for Kansas in the 75th minute.

Off a 2-on-1 opportunity, Christie found the back of the net as she neared the box, outrunning two Jackrabbit defenders for 40 yards to the net. It was Christie’s first collegiate goal, as well.

Francis found time to play almost all of the active roster Sunday, as 22 players made an appearance. Among them, redshirt sophomore Mandi Duggan entered for the first time since her freshman season in 2016, following an anterior cruciate ligament injury in 2017. Duggan sent a header wide right on her lone shot of the match.

Kansas will travel to Lincoln, Neb., for the Husker Invitational next weekend. The team is slated to face Oregon at 4 p.m. Friday.

“I think we just have to keep momentum going,” Francis said. “We got some things we’re doing well, but we got a lot of things we got to do better.”