Bringing Mike Vollmar, a former associate athletic director for football at Alabama and Michigan, on this week as KU’s senior associate AD for football administration, Long told reporters, has helped him in that process.

“Mike is just a great professional with great experiences,” Long, a former AD at Arkansas and Pitt said, “and he and I have seen programs that have the things in place that help them win. We’re really just assessing things, looking at things. We’re doing little things.”

Upon starting at KU on Aug. 1, Long quickly wanted to hire Vollmar, in order to have someone who could be around football practices, meetings and even meals — the type of focused observance the AD simply did not have time for with all his other responsibilities.

Some changes are smaller and less notable, but Long said one decision they reached was to move the Jayhawk statue at the back of Anderson Family Football Complex, the one players rub when they enter or exit the locker room while making their way to or from the stadium or practice fields, and relocating it to the front of the complex.

“It’s a really cool piece,” Long explained of the tweak, “and we want fans and student-athletes to see that every day when they’re coming in the building, because that’s what they represent, the Jayhawks.”

Vollmar, Long added will do other “little things” around the football facilities to make sure the environment is better for student-athletes.

“That’s why we’re here,” Long said. “Those players are working so hard to win.”

The new AD also not so subtly brought up the subject of football victories while addressing fans at the rally geared toward KU supporters in the Kansas City metro area.

Long told the crowd he can tell the coaches and players are committed to “breaking the cycle” and getting KU back to a bowl game — an achievement the Jayhawks haven’t pulled off since the 2008 season. 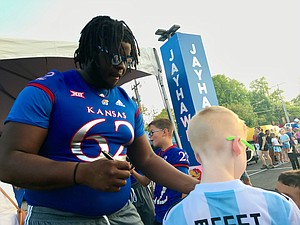 University of Kansas senior offensive lineman Dwayne Wallace, a transfer from Cal, signs autographs for fans during the KU Kickoff at Corinth Square, on Aug. 17, 2018.

The university, Long went into further detail off the stage, needs the football program succeeding for obvious reasons. That’s why he wanted to show a commitment to changing it for the better by putting someone with Vollmar’s background — he recently spent four years overseeing University of Tennessee football as a senior associate athletic director — in place.

If turned around, Long said KU football should generate more revenue than any other team on campus.

“So we need to invest in our biggest engine so to speak. Right now men’s basketball is that engine for us, so we’re really fortunate there, because they are a great economic engine for us,” Long said. “If we can bring football along we will have the best of both worlds. And I am one of those who believe you can be successful in both football and basketball. They are not mutually exclusive, and I believe that and we are working really hard to make sure we can bring football up to that level.”

Vollmar will monitor all aspects of the football program, Long shared, and assist Beaty and his staff to some extent.

“But Mike’s more at a 30,000-foot (view), trying to help see things in advance,” Long said, “and get things corrected and more smoothed out before we get to that point.”

Along the way, the new AD plans to remain in constant communication with Vollmar, to keep up with everything going on with the football team.

“I thought I had energy. Mike’s got tons of energy,” Long said. “We’re talking throughout the day, visiting, texting. We’re in sync and we’re in conversation. Plus he’s new like me. We’re learning the systems of Kansas, how to get things done, who to see where. So we’re both kind of leaning on each other and leaning on the great staff that’s already here.”

Kansas Athletics’ still unsigned multimillion-dollar extension with Adidas, Long revealed Friday evening, is in the process of being evaluated.

The AD said the apparel contract — valued at $191 million over 14 years — has been the subject of conversation during meetings he has had with chancellor Douglas Girod and other key members of the university.

“We’re working through that. We’re very optimistic that we’ll finalize everything soon,” Long added of the deal, which was first announced in September of 2017.

Adidas came under fire late last year when the company’s head of global sports marketing, James Gatto, was indicted on a federal wire charge in a scandal tied to steering basketball recruits to schools with Adidas contracts.

KU’s current deal with Adidas expires in July of 2019.

Long repeated he is “very optimistic” KU will be able to officially extend the contract.

“Once we finalize,” he said, “then we will move forward with a new agreement.”

KU brought 21 of its football players to Corinth Square for the Friday night pep rally.

The Jayhawks spoke with fans, signed autographs and some even danced along with children to the music playing at the shopping center.

Beaty said he wanted to bring a lot of players who will be new to the fan base this coming season.

For Beaty, having Vollmar "monitor all aspects of the football program" is like having the IRS as a roommate. Beaty has no choice but to welcome him with open arms but it will be a true test on whether he shows openness to new input or if he lets his pride politely resist the constant "suggestions" for change. I am betting Vollmar is not evaluating the KU playbook, but sitting down with the players for meals is even more intimate than that to a coach. Honestly, I like Coach Beaty. I really do. He has maintained a level of positivity and commitment to the program throughout this nightmare run. While I completely understand if Long goes with a new coach next year, I hope he gets things moving in a good direction this year. Perhaps he will be able to keep his job. I would be OK with that. It seems college is a bit thin on coaches with integrity these days. If not, this good man should be encouraged that he took on perhaps one of the worst jobs in college football with enthusiasm and passion and as a positive model for young men who are learning about life as an adult. Not once, even when success is still elusive, has he lost his passion, positivity, integrity and commitment.

The one thing l like about Beaty is his integrity. He's not willing to sacrifice the football program by letting players get away with things. He's dismissed some pretty good players for reasons we don't really know, but that these players broke rules. I am sad to see the talent go but pleased Beaty didn't sell his soul to win with questionable player behavior. Also his players graduate, they may not have won many games but a degree is for a lifetime, a great first step for all the players.

Beaty has no integrity. Take your head out of his ass and you would be able to see that.

Steve, I believe you speak for me and many others who are truly beholden to Beaty for his effort. I, like you, hope he can figure this Head Coach thing out. He is smart and has all the tools except a lot of experience as the top man. I am hopeful this is the year he can, with the help of experienced assistants bring enough success to warrant retention.

I disagree...he has become more elusive of the press, he has closed more practices, he has cancelled the spring game, last year he opened portions of practices to the press...not so much anymore Remember last year when the only press we got was when the football team didn't shake hands with the future Heisman trophy winner. If that is teaching young men....oops.

He isn't as positive as people give him credit for.

I agree with Steve and Kevin. I will add one more thing that I truly admire about Beaty. He is acting as their “away from home father”. Some of these YOUNG men have not been away from home before. They don’t get to go home very often, sometimes staying here through the summer. I heave read Beaty (more than once) talked about developing these young men into productive men in society. There is life after football. Will they be ready. He is a great role model and more than one football player from KU has said that coach Beaty has made them better players AND better men. Oh how I am hoping for success for him and the program. I would truly like to keep him.

Beaty seems to be an excellent moral person who cares about others. He mentors young men into mature men. We need way more of that in our society. My family mentors fatherless children in Wichita through Youth Horizons. I get it. But he was hired to be a head football coach as well as these other skills. He's great at the skills mentioned above and deserves praise. He might need to continue those skill though as an assistant or administrator. Four years in and I don't see the professional progress of his coaching abilities. Indecision, poor game management and stubbornness seem to be the same. I do believe Long will give him 4 game minimum to prove these doubts wrong and I hope Beaty does because I would hate to start over again but he HAS to prove these doubts wrong now. All slack is gone going into year four in my opinion.

It’s encouraging there is apparently no hesitation renewing the adidas contract. I do not think that would be the case if down the line new facts come out that make continuing with Adidas controversial.

I'm guessing there are a few clauses KU wants in the contract if things go awry. Once those get mended, it will be a done deal. I could imagine if it comes out that Adidas paid KU players, there will be some type of opt out or some type of payment made to KU.

KU has the #12 shoe contract in the country despite our football program according to Forbes. Most of the top 20 are football powers....Hmmm....interesting.