Twelve practices into the Kansas football team’s preseason camp, head coach David Beaty has not yet seen enough to decide upon a starting quarterback.

However, Beaty indicated at his weekly press conference Thursday the moment of truth should be right around the corner.

“I love the competition that we have going right now,” Beaty said. “This weekend is our second big scrimmage, and we need that scrimmage. We need it. We need one more look at them to be able to kind of have a good idea.”

The Saturday scrimmage will come two weeks before KU’s Sept. 1 season opener against Nicholls State, and one week after the initial preseason scrimmage, during which Beaty and his staff got extended looks at quarterbacks Peyton Bender, Carter Stanley and Miles Kendrick.

Beaty stated in July the plan was to narrow the QB race to two quickly at camp and shortly thereafter identify the starter. He expects to “probably” be “good to go” on reaching a decision following the second scrimmage.

“This weekend’s going to be kind of a telltale for us,” Beaty said. “We're not at the point where we're ready to name it yet. But there’s been some separation. If I had to make a choice today, I kind of know where I'd go.”

According to Beaty, he doesn’t want to rush a pronouncement “just to make it,” because the coaches would like to be as convinced as possible before choosing the candidate who ends up atop the depth chart. 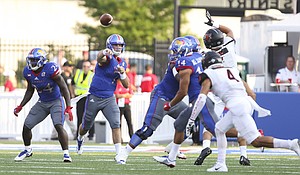 “We have to give ourselves the best chance to win,” Beaty said. “Our fans deserve the best guy behind center being able to take care of the ball.”

Asked if the number of QBs being considered for the starting gig at this juncture was two or three, Beaty offered a “no comment.”

The fourth-year KU coach went on to stress that the next three or four days, to him, are the most important ones in camp.

“A lot of people do well early. A lot of people can string along for four, five days. But, man, when you get in the dog days, 12, 13, 14 practices, then we get to see who you really are,” Beaty said. “So these are going to be big days: (Friday), Saturday, Sunday are going to be critical for those guys. It’s the next phase of evaluation.”

If the quarterbacks know, through what has transpired at closed practices, that some natural separation has eliminated one of them from the competition or put one quarterback ahead of the other two, they made sure not to indicate as much while fielding questions from reporters Thursday afternoon. 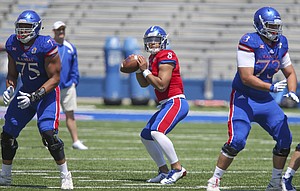 “I don’t know,” Bender replied, when asked if he sensed some differentiation. “I just go out there and try to focus on myself and focus on trying to get the offensive unit better whenever I get my opportunity to play.”

Kendrick, too, hesitated to answer the same question directly.

“Maybe guys outside of the quarterback room, other teammates, maybe they sense who they feel is separating or who they want to go on that field with,” Kendrick said. “But as a group, we all want to do our job as best we can every day and be the best leaders that we can.”

All three QBs downplayed the pressure to perform at a higher level over the course of the next few days, as the competition apparently heads toward a conclusion.

But they know Beaty said he needed to see how the second camp scrimmage plays out before anything is finalized.

“The first scrimmage was good,” Stanley said, “just to see all 11 guys out there on the field at once, moving the ball down. For the offense, I thought we had some great drives. I think this one coming up on Saturday will for sure be big.”

If I had to put money on it I'd say Miles Kendrick. But we'll see.

I think it's gonna be - -- I hope it's gonna be , the only thing I want Bender to do is serve the water. - He is an interception looking for a place to happen

He'll announce who it is when the qb runs onto the field the first game. Same bs as last year.

If the past is any indication, he'll then change QBs at halftime and change again a couple of weeks later ...

DB should enjoy these last moments, by this time next year he'll be doing something else.

Beaty's last presser was very telling. That was the look of a man who knew his days were numbered. He looked tired and despondent.

Ok , I'm gonna say I've tried to stay loyal, be the biggest Coach supporter. I've seen him bashed on here just unbelievable. - -having said that , I'm now DONE. - this is such BS, I've reached my limit , give me a f - - - - - - break. my GOD man if deciding on a QB is that hard for you - -man , I'm just so ready to un load. We have heard this same BS for the last three dam years - -COME ON " We need one more look " - - - " Have not seen enough " - - -" Doesn't want to rush on announcement just to make it " - -this crap is down right sickening. EVERY YEAR - - EVERY DAM YEAR this is what we hear. you haven't seen enough? - -Hell you've had all spring drills /practices - - now fall practice you haven't seen enough? - -have you been watching? - - you need one MORE look? - - - umm , umm , umm . - Then after that look it will be ONE more look -- Then on Sept 1st when kick off is here will you be saying - -do we have time for ONE more look. - -Good GOD man make a decision holy crap. - I can't defend you anymore you give me NOTHING to work with - -lord give me strength on this guy - -I have been patient - - your bashers I'm now seeing have been patient - -no wonder our program is buried - - -hell you can't even make a decision about a QB little lone a decision at a critical point in a game - -Some body please tap this guy on the head - - umm HELLO - - ok guys rant over and as always ROCK CHALK ALL DAY LONG BABY

We wouldn't have much to lose if Beaty went with Kendrick. I mean if Bender and Stanley still haven't distinguished themselves as the clear cut starter after all this time, then what is the point? I grow tired of Beaty's secrecy because it's ultimately pointless. Waiting to name the starter does nothing strategic for us. Does he really think we'll pull one over on our opponents if they don't know who the starting QB is come game time?

Or maybe they were hoping to have Kendrick come in and wow, and he can't...so now he is left to choose again. When Kendrick was throwing, if I recall correctly 5% less of a completion percentage in the spring, it is hard to put him in there, when he just can't out perform the other two.

Anyone surprised that Beaty needs more time to evaluate the QBs? Remember this is a systematic issue. We follow the QB nonsense because it is the most important spot on the roster, but the real issue is the other 21 spots are going through the same thing. There is a battle and we won't name starters. Have you wondered who are key back is going to be, who are the three or four top receivers? Who is going to be center, all of the positions are these hodgepodges of decisions made at the last minute, with no clear repetition built into the plan. Great repetitions make better players. Beaty has prescribed to the belief that someone behind you will take your place, and to prove it I'll give them half of your snaps. This doesn't make either of the two players better, it just gets you have the work with your teammates.

100 other teams have a QB competition.....the kooks there must be freaking out too.

Did you respond on behalf of the kooks as a duly appointed representative or just out of a sense of duty?

Exactly Jay. In fact there’s one going on a couple hours West of us and odd, he’s not in a rush either. And NO, I’m not comparing programs, coaches or anything other than the specific scenario. Here’s the fun part; DB knows exactly who will be his starting QB, he simply isn’t telling us. His prerogative dudes. I’m hoping the team is very successful this year and grabs more W’s than expected simply for the sake of the players that are busting their hump.

Question: would KU fans give up the conference basketball championship streak in return for a KU football national championship?

On second thought, would KU fans sacrifice the basketball streak for KU playing in the Big12 football championship game?

If you're talking about B12 conference streaks... then yes. I'd trade in 9 of those conference titles for 3 more FF banners and another NC title.

Yes, without a doubt.

Hypothetically speaking, Yes and Yes. Fortunately we can actually do both. Be good at football and basketball.

There has been one and only one scrimmage. The only thing different than what was planned all summer is that Coach has told us whether a QB has been eliminated.

Personally, I think what we really need is a little more decaf - or sex.

He can pick Larry, Moe or Curly and it won't make a difference unless his O-line & D-line dramatically improve. Both Bender and Stanley are solid QB's. You guys keep grading them based on results that rely on other subpar parts. A Lamborghini won't impress you with 3 flat tires, 2 missing sparks plugs and a leaking water pump.

I'll pile on...Beaty should be working with the cheerleading staff because he's sure no head coach. Just more floundering in his own ineptness and there's no reason to think he can change.

There is no way Long or Vollmar can be inspired by all of this. There is no way that they haven't discussed possible candidates or at least having a list of names to call. You don't hire a new CEO to turn around a struggling company then operate as business as usual. Both were brought in to make changes. DB is the first change to make. Trying to get stadium renovations stalled under the weight of this pathetic program, you think they were hired to keep the ineptitude going? No. Someone who worked at Mich, Ala, Tenn, Vollmar and Long with his extensive experience knows what it takes to win and keep donors happy. This isn't it. To be taken seriously you have to start being serious. Hiring another Beaty (first time hc) Weis (overrated, over the hill) or Gill (not ready for prime time) just isn't going to cut it. Guaranteed this is the last year of this kind of thing. Too much $ at stake and possibly being booted from Big 12 at stake.

From your lips to Long's ears please.

Couldn't have said it better myself.

I don't know whether he has decided or not. Maybe one of the guys is getting 60% of the reps with the No.1 unit. I do believe he needs to do this very thing. Select someone and give them the majority of the reps over the next couple of weeks in an attempt to get the unit working smoothly together. I am hoping Meacham will provide some leadership for Beaty in areas like this. Be decisive Coach. Let's put a unit together and get them ready.