Oklahoma wide receiver Marquise Brown (5) has a deep pass knocked away by Kansas cornerback Hasan Defense (13) during the third quarter on Saturday, Nov. 18, 2017 at Memorial Stadium.

A couple of days into preseason camp, Kansas cornerback Hasan Defense could tell that the secondary in which he played didn’t resemble its predecessor.

When Defense first joined the program as a sophomore transfer in 2017, the Jayhawks were too thin at his position for him to take many breathers during practices.

“Before, we would get a lot of reps. Now, you have to split up the reps. Obviously, when your reps get taken you notice it ASAP,” Defense said, while laughing about what clued him in on the secondary’s improved depth. “That’s how you notice it. You’re not in as much.”

Just 12 months ago, Defense didn’t have many teammates to outperform in order to secure a starting spot. Now, KU’s coaches are confident enough in their options at corner that they’re having Defense practice some at safety and nickelback, too.

Head coach David Beaty cited the experimentation as one of many reasons he thinks KU’s secondary has made considerable progress since the end of last season.

“Man, I'm actually very, very excited about that group,” Beaty said. “Lot of new guys over there, lot of new corners, lot of new safeties. Just look at the roster and look at the depth chart. We've got options.”

No form of a depth chart has been made public at this stage of camp, but a number of Jayhawks are perceived as contenders to show up on the defense’s first and second units. 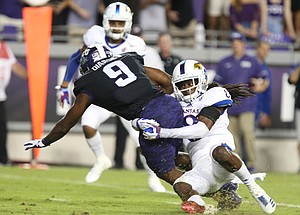 Kansas cornerback Shakial Taylor (8) tries to hang on as TCU wide receiver John Diarse (9) trudges up the field during the first quarter, Saturday, Oct. 21, 2017 at Amon G. Carter Stadium in Fort Worth.

“That was actually my opening talk to the defense,” Bowen shared of interacting with players at camp. “When you look on our depth chart right now, at every single position you can make a legitimate argument that there’s at least two guys capable of starting and succeeding in the Big 12. In a lot of those places, there’s three guys. So the days of knowing you’re going to win a position by default are really over.”

During KU’s first couple of practices — neither coaches nor players have been available for interviews since Saturday — Beaty noted a handful of new defensive backs who caught his attention.

What’s more, 5-10 sophomore corner Thomas, who just arrived this past week as a transfer from Blinn College (Texas), impressed the head coach enough for Beaty to call him “a playmaking dude” that he really likes.

“You could tell he loves football. He came from the bottom of the depth chart to he's hovering around the top already in two days,” Beaty said. “He's got some quickness, he's got some playmaking ability, some natural things to him.”

Junior nickelback Torneden, who started 11 games a year ago, said the defensive backs believe they can be a “strong” group this fall — keep in mind, KU surrendered 296.8 passing yards a game in 2017.

“Last year, we lacked some experience, but now, with the year under our belt, we have no excuses this year,” Torneden said. “We are all excited and ready to show what we’ve improved on.”

Both Beaty and Bowen expect competition for the coveted spots atop the depth chart to fuel the work of corners and safeties alike as the Jayhawks prepare for their Sept. 1 opener against Nicholls State.

And both coaches acknowledge such battles simply weren’t possible in the secondary the past couple of years.

“I mean, that's an area that I really still think we got a chance to be pretty good at,” Beaty said.

“We got some guys that haven't played in the Big 12 back there that are new, which there is a learning curve,” he admitted. “For the most part, I'm excited, because there weren't bodies there before. I mean, you were two deep. Somebody got hurt, you were shifting. Now, we got a bunch of folks out there that are able to play, which is good.”

I hope there is real depth and talent. Here is my concern, I’ve read several articles this year about the receivers. In almost every one of those articles, the receiver “made a nic catch” on an under thrown ball, too far to the right, left, etc. basically they caught a “not well thrown” ball. That makes me believe that our quartback situation action still STINKS. Good grief, how hard is it to get a decent quarterback. Every other college can. The whole point, is it is easier for defense backs to look good when they are up against a mediocre quarterback.

I was thinking the EXACT same thing when I saw video of defenders knocking down poorly thrown balls to receivers. It's not that the defenders are that great -- it's that Meacham's QB's can't get the ball in there.

I don't believe that Meacham recruited the majority of the current roster's QB's. We Jayhawk fans were truly spoiled by Todd Reesing Jayhawk's era.

Doesn't matter if he recruited them in the least. If he can't teach/coach them to throw a ball that won't hit a defender in the back or sail wildly over the receiver's head....we are screwed.

It's not that easy, even for the big schools. FSU went from a national title contender to a below .500 team because of their QB situation last year.

I just hope we are not the TOAST of the town, as in recent decades. And keep in mind I’m one of the positive posters.

I'm excited to watch Mike Lee and Wise play. I hope others are exciting and get on the "to watch" radar as the season progresses. Players...you'll never get this time back in your life - make the most of it.

David - That's absolutely true and will be the primary concern for several years. (We don't have any underclassmen replacements on the DL.) We have new and unproven DEs. There has been a nice influx on the OL but not so much on the DL.

so true. we really need to recruit 3 or 4 DL guys every year to keep pace.