David Beaty’s fourth season as head football coach at the University of Kansas officially kicks off in a little more than four weeks.

Between now and the Sept. 1 opener, his Jayhawks have no shortage of matters to address, from trying to perfect plays and techniques, to identifying the players most capable of turning KU into a competitive team.

It all begins Friday with the first practice of preseason camp.

Here are five storylines to track in the weeks ahead, as Beaty and his staff prepare their players for what they hope will become a breakthrough year for the long-struggling program.

What would preseason camp be without a KU quarterback competition? While identifying a starting QB has become an August norm in Beaty’s time — and, really, dating back to Todd Reesing’s days as a Jayhawk — this one at least feels different from its predecessors. 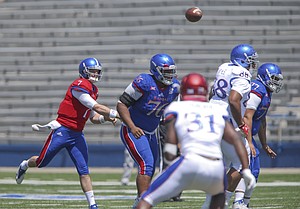 At least for the first few practices, not two, but three, different players appear to have a shot at winning the job.

A hot start will go a long way for either returning starters Peyton Bender and Carter Stanley, or sophomore transfer Miles Kendrick, too. Beaty already made clear he and offensive coordinator and quarterbacks coach Doug Meacham plan to act more quickly on their evaluations this time around.

The idea is to narrow the race to two with little delay. And, unlike a year ago, when Bender vs. Stanley lasted through the game week practices leading up to the season opener, KU’s coaches intend to name a No. 1 QB as soon as possible.

Has Bender, a redshirt senior, developed enough in the offseason to go out as an effective Air Raid quarterback? Or will one of the QBs with running ability, redshirt junior Stanley or juco transfer Kendrick, better complement the surrounding personnel? The Jayhawks hope to land on the correct answer even before the season begins.

While KU’s coaches are glad to have 17 players who started a year ago still in the mix, every team, especially one that lost its final 11 games, needs an influx of talent to truly improve.

If the Jayhawks want to win more than three games for the first time since 2009, they need a number of their incoming transfers and at least a couple freshmen to prove themselves worthy of consistent playing time. 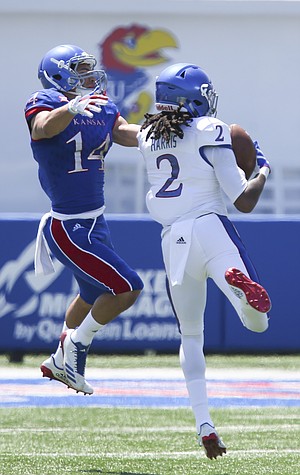 True freshmen from Louisiana, cornerback Corione Harris and running back Pooka Williams, may turn out to be two of the most talented players to come through the program in years. But it also could take a season or two for their potential to be realized. No one yet knows how much Harris or Williams will be trusted in the months ahead. If they live up to their recruiting rankings as early as this fall, both sides of the ball would benefit.

In the meantime, KU coaches need even more out of their junior college transfers immediately. Players such as cornerback Elijah Jones, defensive tackle Codey Cole, defensive ends Najee Stevens-McKenzie and Azur Kamara, and quarterback Kendrick were recruited not only to boost KU’s depth, but also with the goal of putting a better football product on the field in 2018.

Plus, one of the most valuable players on the roster just might turn out to be a graduate transfer: senior offensive lineman Alex Fontana, formerly of the University of Houston and a potential starting center.

Internally, KU’s veteran defensive leaders have high expectations for the unit heading into the season.

With redshirt seniors in defensive tackle Daniel Wise and linebacker Joe Dineen directing that confident approach, the defense plans on vastly improving after a disappointing 2017.

“Guys who have been in the grit of the game, who know the ins and outs and X’s and O’s. That just creates even more leadership from within,” Wise remarked. “And with the young guys, cats coming in and with better communication overall with the coaches and with each other, (becoming one of the top-five defenses in the Big 12 is) what we should be able to get done.”

A year ago, KU finished ninth in the Big 12 in passing defense (296.8 yards per game allowed), eighth in rushing defense (171.6) and 10th in total defense (468.3). However, the most talented players from the unit envision the hard lessons learned through those experiences making them better.

The defense needs to exert itself in August, with Wise and Dineen demanding the most from their teammates, for those aspirations to play out. 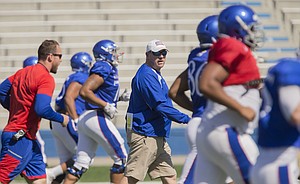 Now, former Missouri center A.J. Ricker coaches KU’s O-linemen, and it will be up to him to strive toward turning a liability into an asset.

A new voice and mind for KU’s blockers to learn from might be just what they needed, but that change alone won’t magically upgrade the position group as a whole.

With junior tackle Hakeem Adeniji back healthy after offseason shoulder surgeries and experienced starter Fontana inside, Ricker at least has some veterans around which to build.

What Ricker is able to extract from the group during preseason practices will set the tone for the O-line’s potential moving forward. And KU certainly needs to squeeze all the effectiveness it can from its offensive linemen.

Even among KU’s numerous experienced returners, the team needs far better individual performances in order for 2018 to go down as a year of progress or relative success. 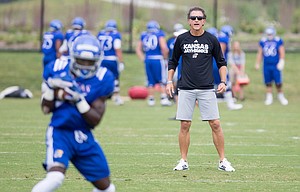 By switching up the coaching responsibilities for some of his assistants early in the offseason, Beaty might have pulled off an under-the-radar valuable maneuver.

Meacham’s coordinator duties haven’t changed, but in his second year at KU, he’s coaching quarterbacks instead of receivers. During his first season as O.C., Meacham never felt anywhere close to satisfied with the offense. With KU’s quarterbacks working directly with him at all times, the offense may prove better off.

Likewise, KU’s cornerbacks hope to get a boost from the constant tutelage of defensive coordinator Clint Bowen, who oversaw safeties previously.

KU’s special teams — flawed in many facets, other than the presence of steady kicker Gabriel Rui — need a pick-me-up from reassigned assistant Kenny Perry, formerly the cornerbacks coach.

If KU’s QBs, corners and special-teamers all look revitalized, that would be a nice starting point for a reversal of KU’s fortunes.

What a novel concept! KU recruits short term players, JCs and senior transfers and a decent season depends on them improving the product on the field resulting in wins. This has not happenedduring the Decade of Despair, other than a few individual players showing some talent. I will believe things are better only when things are better.

Benton, how much press access do you get during August as regards to watching practice? With what ever access you do get, how comfortable are you in evaluating the team? Finally, can you see significant size/strength improvement over 2017?

well, its not far off now. those first few games will tell us a lot. would love to see a 3-0 start!

An 0-3 start will be far better for the program.

1) Usually 2 QBs and you select the QB in the last hour of the pre-season, this year you have three, but you are going to decide quicker.

2) Newcomers could bring in some fortifications and I'm excited to see the opportunity for them.

3) Bowen is still the DC; I hesitate to see an advantage here.

4) This is an interesting one; lots of new players; injuries have hurt us; lots of bodies; couldn't field a team for the spring game because many of the players weren't here for the spring or were injured, so practice and strengthening time has been limited. A new coach gives some hope, but there are probably 5 storylines to figure out in the OL by itself.

5) Every year Beaty switches coaches to different roles; most of the time it sounds good, but same result has happened so far.

Jeff, to add insult to injury Bowen is also coaching the cornerbacks this season. This is a true recipe for disaster, he barely treads water as a DC. Need to promote Miller to DC ASAP!

Who is the new Designated Blocker now that Mesa Ribordy has gone?

Beaty is by far the best blocker on the team. Just ask the hundreds of fans he blocked on Twitter for criticizing his awful coaching.

There is a small part of me that feels like this team could surprise with 5 or 6 wins.

I know, somebody punch me. But we are loaded with juniors and seniors with a ton of experience.

Coaching staff are backed into a corner with nothing to lose.

And Doug Meacham is a proven OC.

Just sayin, this team could perform a bit better than what we’re used too.

SLAP, SLAP wake up! LOL. Actually I'm the eternal optimist and always look at the schedule to find a path to a bowl game every year. This is the first year where my optimism has been beaten out of me. I hope I'm wrong but to get to six wins we need to win the two obvious ones and hope the other 4 teams forfeit. That's where I've been beaten down too. I'll cheer them on and hopefully the players see the opportunities before them and seize the moment to shine but I'm out of optimism.

I know, i want to be optimistic also because i love KU, BUT come on back to reality. Just remember all the stories and hype we have been fed the last 10 years. From Cryst, to Heaps, to Cozart, on and on and on and on. dont drink the kool-aid again. Just imagine that the stories are true this year and we actually are 100% better than last year... That still means we would lose at least 9 probably 10 games. HERE IS SOME REALITY for you. If we were 3x better on off this year that would mean we would still only have 63 yards total vs TCU. There seriously is no hope or reason to believe. :(

I don’t see 6 wins either. I could be shocked.....nobody predicted 12 wins in 2008. I think the absolute best we could do is 4 wins. I am interested in seeing 100% out of the coaches and team, not lose half of our games by 35+ points and fans that will support this team. I don’t think any coach or player woke up this morning and said, “hey, let’s lose 11 games badly and embarrass our fan base”. Doesn’t happen. They need some confidence and support. I will watch them through the pretty and the ugly. Hoping to see less ugly this year and I think that can happen

Our out of conference schedule this year is very easy. We play an FBS team, the worse team in the Big 10 at home, the predicted to be last or almost last MAC team(although on the road), in your 4th year 3 wins should be a given.

Beaty is 2-1 against FBS teams and 0-6 against non-conference games.

I believe he is 0-5 against MAC teams.

The other loss was to Rutgers...0-1 against them.

Ritchie, under normal circumstances I would agree with you. But statistically, over the last 8-9 years we have been the worst P5 team. Nothing is a given

Here's an idea. Instead of evaluating like you usually.do, try this. Put together a full contact scrimmage. Let the quarterbacks call the plays. Pick the one based upon the calls made . Whichever one sees what the defense is doing. Then work on his.execution while continuing his development. Many QBs will stick to what they are comfortable with...thst they can do. This is good. With Reesing he didn't think there was anything he couldn't do.

The guy who tries to be too smart is a danger. The guy who's too cautious will get you nowhere. But the bottom line is in that huddle they know what they can do. So, get out of the way!