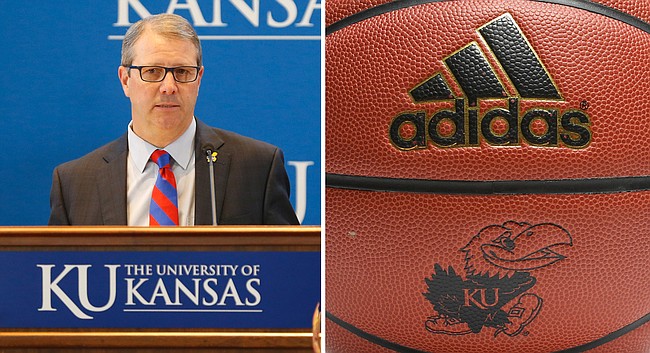 But now questions are emerging about how comprehensive that examination was as KU officials have confirmed that the examination that took place last fall produced no written findings or report.

Girod confirmed in an interview with the Journal-World on Monday that he received verbal briefings about the examination but that he did not receive a written report or other detailed written findings.

“We didn’t really ask them for a written report,” Girod said. “We didn’t feel the need to release an external report. What we needed to be sure of is that we are comfortable and confident in the way our team operates and in meeting any and every requirement necessary.”

Girod, in a statement on April 13, said he had “complete confidence” in the athletic department’s adherence to rules. Girod cited an “examination” — he never called it a report — conducted last fall as a primary reason why he was confident an independent review wasn’t necessary. Girod was responding to a question about whether an independent review would have any value, given that the most recent federal indictment in the college basketball scandal alleges a mother and a guardian of two KU basketball players were paid at least $130,000 as part of a pay-to-play scheme. The indictment does not implicate any KU officials, but rather alleges that the scheme was orchestrated by an executive of Adidas, which has a multimillion-dollar partnership with Kansas Athletics Inc.

After Girod’s statement, the Journal-World filed a Kansas Open Records Act request seeking all written reports related to the review referenced by Girod. KU officials responded recently that there are no such records.

Without a written report, it is difficult to ascertain what was examined and what methods were used to review the athletic department’s policies and practices. The review was prompted by an Oct. 11 memo from the NCAA Board of Governors and Board of Directors to schools with NCAA Division I basketball programs. That memo said schools with Division I basketball programs were “required” to examine their men’s basketball programs "for possible NCAA rules violations, including violations related to offers, inducements, agents, extra benefits, and other similar issues.”

The memo also said the NCAA was “mandating” that schools “look at the conduct of their men’s basketball coaching staff and administrators to ensure their compliance with the NCAA rules.”

KU did hire the Overland Park law firm of Bond, Schoeneck and King to assist with the review. But at the time, KU Athletics officials noted the law firm would not be conducting the actual review but rather would be providing assistance on technical matters. On Monday, Girod said much the same. He said the outside assistance was used to help the university understand the questions at play. Girod said the examination did look at multiple records to determine whether there is anything the university should be concerned about.

“To date, we have not discovered anything,” Girod said before pausing. “From our perspective. I can’t control the world. All I can try to do is understand our team, our practices and our behaviors.”

A significant difference between last fall when the examination was conducted and today is that last fall, KU had not been connected to the college basketball scandal. Also, fewer details about the alleged scheme were known to KU or the public. The latest federal indictment now lists KU as a "victim" in the case and alleges KU was defrauded as part of the scheme by the Adidas executive to pay the family of players in exchange for the players attending KU.

The legal theory is that KU was defrauded because it gave financial aid to students who weren’t eligible for it, and potentially KU could be damaged by penalties from the NCAA for playing athletes who were not eligible.

Girod confirmed that the examination last fall uncovered no evidence related to the alleged scheme.

“We have gone back to look at anything we have access to, and we can’t find any evidence of that,” Girod said. “But we don’t have access to everything. That is all we really can do — make sure that on our side of the house we are doing everything appropriately and properly.”

When asked what KU was doing to help ensure that KU wouldn’t be defrauded in the future, Girod said:

“If what is alleged is true, then somebody was plainly misrepresenting. There is not a way for us to protect ourselves against that.”

• April 19 — Zenger doesn’t like ‘victim’ description for KU, expresses complete confidence in Self, staff in wake of college basketball scandal

• April 12 — Chancellor mum on whether independent review of KU Athletics is needed; KU saying little about partnership with Adidas

• Oct. 16 — Zenger: KU will comply with NCAA requirement of all schools to review basketball program

If they didn't want a written report, so what? It was an internal inquiry ordered by internal parties. No one asked them to do it and thus no one should care that they didn't write a report to satisfy the public.

I agree a hundred percent.

Kansas had no obligation to produce a report. It would have satisfied some of my own personal curiosity, I admit. But if we're speaking in terms of what the University should do, there is no case to be made that Kansas is in error for choosing to take the path it took.

Why does the LDJW continue to try to make it look like KU is hiding something or being deficient in some way? Do they know something that we don't? If so, so state.

I have a feeling Barry - hope I'm wrong - pray to GOD I am but I'm starting to get this feel that you hit it on the head. - I think this might not turn out so well I think there could be more then what we are hearing or is being told - - - NOT GOOD

I for one see no problem with the LJW investigating and reporting on this. They should file the open records request and they should report on whatever they find out.

However, this would be big news if KU were suspected of knowing or assisting in the paying of players, etc and then received no written report from the investigation. One could possibly suggest that perhaps the investigation (or lack thereof) were part of a cover up. As it is, however, this is newsworthy, but not groundbreaking.

It would make sense that there would be some communications that can be produced regarding the results of the investigation. Emails or something that summarize or conclude if not make recommendations. Though it wouldn't be too surprising if a matter such as this (guilty or not) which has serious legal ramifications, if there were directions to keep the investigation confidential and not share information about it in a way that could get to the public.

I don't totally disagree with you, Jonathan. I dont see a problem with LJW investigating this. But I also don't see a problem, from the University's perspective, on not producing a report. It's not as if the lack of a report means they weren't given information about the state of the program when viewed through the lens of adherence or compliance.

We could be cynical and suggest they're "hiding something". But that's irresponsible unless there is evidence to show they are. In fact, it could be the case that there "might" be information which is totally innocent, but when viewed by cynics they could envision nefarious scenarios which would start discussions that are damaging to the University, innocent though they might be. I take Girod at his word here.

A report right now supporting no findings from an independent third party would really help support the assertion of a victim.

Girod still is unaware that we have sports at our university. He is over his head and it keeps showing.

A report under privilege would not need to be disclosed, but in this case they chose not to formalize a request by the NCAA.

Why does that assertion have to be supported, especially publicly? It's not as if the FBI is going to have its investigation go any more or less forward because of an independent investigation the University undertook. And you can be damn sure that if the FBI's findings conflict with the University's, the NCAA is not going to place a great amount of faith in our own investigation.

If the FBI were NOT involved, I could see greater need for a report. But the FBI's findings would supplant anything the University produced. There is no need to "support the assertion of a victim".

Something doesn't seem quite right about this. "Girod confirmed that the examination last fall uncovered no evidence related to the alleged scheme". Assuming that the feds are correct about their allegations of money going to players, then the "examination" was, by definition, inadequate. I would think that they would want to get out in front of this if possible but Girod's attitude would suggest otherwise. Maybe there is nothing more to disclose and let's hope so but this just seems like the wrong approach.

The unwritten report concluded that KU had done nothing wrong as far as the alleged scheme. KU cannot investigate every person in every athletes life. That is far too intrusive and reaching. Would you want a school demanding that you produce all your financials and tax returns for the last 3-4 years because your cousin's kid is playing on one of their sports teams? Or course you wouldn't.

The FBI has vastly more investigative power than an internal KU investigation. KU can't subpoena people, use wiretaps, strike plea deals, or raid offices. The FBI does. KU has some ability to require documents and testimony from its own employees and athletes, but absolutely zero authority over Adidas, guardians, etc.

As far as the University not being able to protect itself...hog wash. True for the current event. But for future events...you demand damage provisions in the new Adidas contract that if KU is harmed by Adidas actions or negligence, then damages are due.

Have seen this in lots of contracts before. Even if its stuck with a dreaded mediation clause...that's a lot better than the current position KU is in.

What happens in the future will be the recommendations the special committee NCAA organized for suggestions what changes they suggest. So later this week the report will be made public. I'm sure the KU people in charge will work with NCAA and do what is necessary to not violate rules.