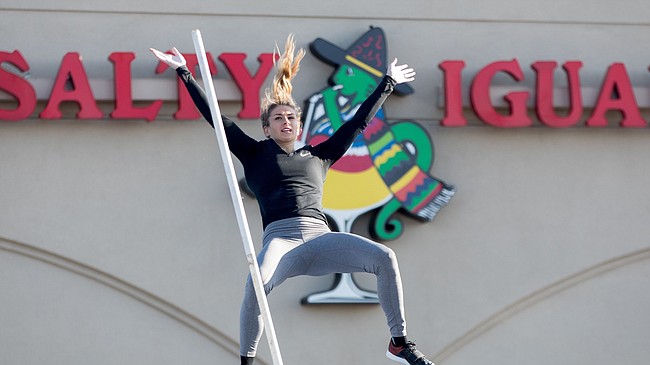 Kristin Hixson clears the bar on a vault on her way to winning a street pole vault exhibition in the parking lot of the Salty Iguana restaurant near 6th and Wakarusa St. Thursday afternoon.

After competing in the various rounds of the third annual Kansas Relays Street Pole Vault, the seven athletes were called back to the stage.

This time, the voice doing so was not one from a Kansas Relays official, nor that of PA announcer Cal Butcher, whose voiced boomed over the speakers in the Salty Iguana parking lot. Instead, the direction came from Ava Lamothe and her mother, a reminder of one of the key intentions of the placement of the event in such a public forum. 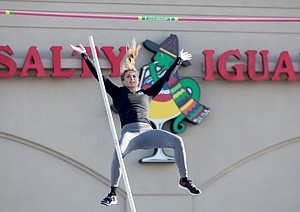 The Kansas Relays hosted a Street Pole Vault Exhibition on Thursday, April 19, 2018 in the parking lot of the Salty Iguana restaurant near 6th and Wakarusa St.

“I thought that was really cool,” said the 10-year-old Lamothe with a smile. “And it was so high.”

Indeed it was, all the way up to the ultimate mark of 14 feet, 11 inches. The winner of the competition, as the only athlete to face the final height, was none other than defending champion Kristen Hixson — but more on that in a second.

The event began with hundreds of onlookers watching Sydney Walters clear the first pole, set more than a foot below the final height.

Up next was Morgan LeLeux, perhaps the most accomplished of the lot as the seventh-ranked pole vaulter in the world and a bronze medalist at the U.S. Outdoors Championships in 2017.

LeLeux, who finished one place shy of a trip to the Summer Olympics in 2016, struggled with her first two attempts, prompting a conversation with fellow competitor Lakan Taylor.

“You good?” asked Taylor, who checked in with and cheered on competitors throughout the day.

“I don’t know what’s going on,” responded LeLeux with a shake of her head.

Similar to LeLeux, Taylor failed to topple the 13-foot, 7.25-inch mark on her first attempt. But after strolling back to the starting blocks — stopping only to play with a puppy that had tugged its way to the track — she vaulted up and over the bar on her next attempt.

Taylor cleared the ensuing vault, set at 13 feet, 11.25 inches, with ease. For what she later noted was her first time competing in a street setting, the former NCAA Indoor Pole Vault Champion handled the conditions like a professional.

“It’s really cool having people out here like this,” Taylor said. “I think the biggest thing, we’re in Kansas. It’s a lot different, because when you’re in the stadium, you have a constant type of wind. But right now, it’s kind of swirling.

"But, you know, we're the top of the top athletes. So you've got to roll with the punches.”

The wind, which picked up at various points in the evening, made it tricky for the competitors.

Walters made it through three rounds before being unable to clear a 14-foot, 7.25-inch vault. Taylor was knocked out on a 14-foot, 3.25-inch height, as was three-time Big 12 champion Annie Rhodes-Johnigan, who previously competed at Baylor. Both LeLeux and former Indiana Hoosier Sophie Guttermuth were knocked out on the first bar.

Perhaps the best mastery of the course, then, came from Hixson, a veteran of sorts at the event.

Returning after claiming victory in the event a year ago, Hixson, a three-time Division-II champion who finished ninth at the 2016 U.S. Olympic trials, couldn’t clear the bar on her first two attempts.

“The beginning made me a little nervous,” Hixson said. “Once that was over, it was like a stress off my shoulders. I could really let loose and have fun.”

After getting over the first bar, Hixson advanced past three more of ascending height on the first try, becoming the default winner of the event as the only athlete to advance to the bar of 14 feet, 11 inches.

As part of the competition, Hixson picked up money for each bar she cleared, earning an additional $500 for making it the furthest.

In a sport where the equipment costs several hundreds of dollars and even her black Adidas shoes, glistening and sparkling as the sun reflected off their various colors, had to be specially ordered — she had them included with a shipment to her former college and then paid for them herself — there wasn’t much of a question of how she was going to spend her postmatch reward.

“You already counted it?” Hixson said with a laugh. “Probably put it toward a pole-vaulting trip.”