Spots near the program’s home base aren’t nearly as plentiful now that lot No. 59 west of David Booth Kansas Memorial Stadium is closed, with construction teams mobilizing this week to build KU’s new indoor practice facility.

“That’s a good thing,” Beaty said of the minor inconvenience.

The new indoor facility is considered an essential first-phase component of the athletic department’s “Raise The Chant” campaign, focused primarily on upgrades for the ever-struggling program.

Kansas football coach David Beaty discussed changing the format of the spring game to a practice, standouts on both sides of the ball throughout the spring and whether he tries to name starters before the end of spring practices.

"We've done a tremendous amount of benchmarking and thorough preparation since we announced this project last fall," KU athletics director Sheahon Zenger stated in a release. "It is extremely rewarding — to us and to our fans — to see construction fences up and shovels in the ground. This state-of-the-art facility is a necessary component of our commitment to enable our football program to compete successfully in the Big 12 Conference."

A new indoor facility, redshirt junior Carter Stanley said, was something Beaty told him was on the horizon before the quarterback signed with KU, in 2015.

“And he’s definitely lived up to his word,” Stanley said. “I’m really excited to see it go in. I think it’s supposed to be ready late fall or early winter next year, so I think it’ll be really cool. Anschutz (Pavilion, an indoor practice facility located west of Allen Fieldhouse and currently shared by the university’s football and track programs), that’s not bad. We definitely get some work done there. But it’s going to be nice to have one here at our own facility.”

According to KU, the new football building is scheduled for completion in late fall this year.

"Not only does the indoor football facility put us one step closer to completing the needs of the program," Zenger said, "it will also provide an entertainment space for donors, alumni and fans on gameday.” 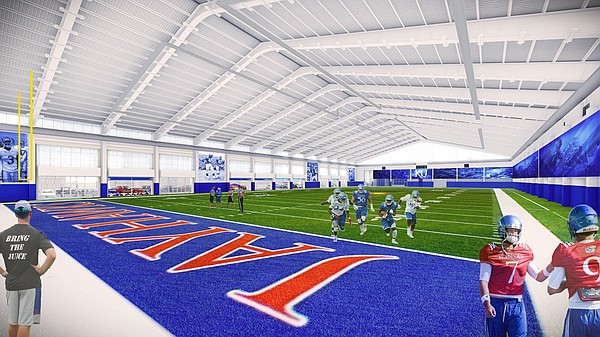 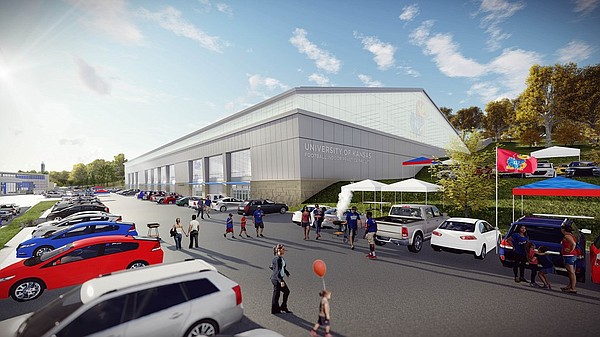 This rendering shows the design for a new $26 million University of Kansas indoor football practice facility, as seen from the southeast looking northwest. 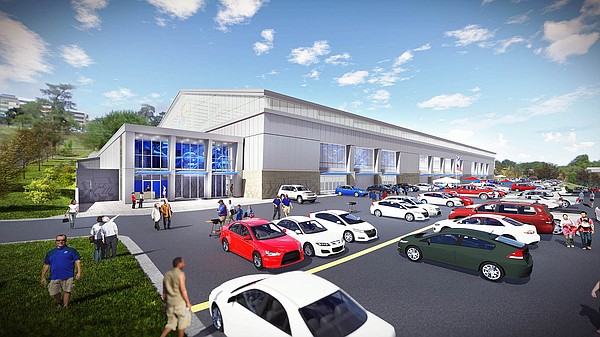 This rendering shows the design for a new $26 million University of Kansas indoor football practice facility, as seen from the northeast looking southwest.

Along with the All-Sports Athletic Dorms, the indoor practice facility will make us competitive when recruiting with other Big 12 programs. KU will never need a 100,000 plus stadium, just one with all the donor and fan amenities.

Cart well in front of the horse. Can't get 20,000 fans for a home game against winless Baylor (who beat us 38-9) but this facility will allow us to compete in the Big 12. Okay.

I wonder if they’ll install some kind of artificial intelligence in the practice facility that can coach a competent football team or run a competent athletic department, something clearly lacking with ours.

You can thank Bill Self for this facility and others before you do Zenger or Girod or anyone else.

Hmmm, kinda reminds me of the indoor football practice facility they built next to Allen Fieldhouse, which was also going to make KU super-competitive. What are we using that building for now, storage of all the football championship trophies perhaps? Where will they build the next one in twenty years? Do we really need Potter Lake, a walnut grove, and an art museum?

I would be willing to wager that if the fans were given a vote, a large majority would favor spending the money on a new athletic director and football staff. KU already has an indoor practice facility. We do not have a competently administered and coached football program.

And the dead horse whipping continues...

Give Bill Snyder at Kansas State (and every other Big 12 football team) a homeless shelter to practice in with a hole in the ceiling for rainy days and he/they would beat a Beaty-coached team 30 out of 30 times.

Who do you think we should lure to coach this team? Bill Belichik? Jim Harbaugh? Les Miles? Surely those guys would be totally excited to come coach the Kansas Jayhawks football team, right?

Can anyone at the LJWorld/KUSports do a deep dive into why this facility seems to cost 25% more than similar facilities or ones that are seemingly better?

Seems like we're (surprise surprise) getting raked over the coals on this one and while I'm sure it's due to Zenger's incompetence, is it that reason and that reason alone?