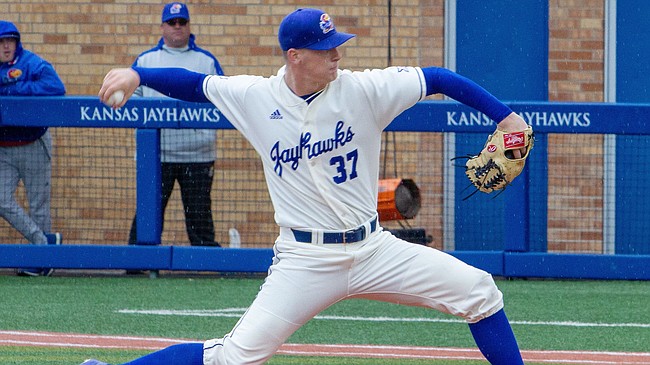 There was no question as to where the biggest out of the game was recorded. Even if you missed it, the mark imprinted on the padding out in center field of Hoglund Ballpark told the story of one of the game’s biggest plays.

Trailing by four in the bottom of the sixth of an eventual 13-3 loss, the Jayhawks had one on with two out. Owen Taylor, third on the team with a .533 slugging percentage, was up to bat and smashed a pitch back toward the wall in center.

The ball carried out to the warning track, but TCU’s Johnny Rizer managed to snag it while crashing into the padding. The subsequent impact left behind a snake-shaped water stain, perhaps fitting, as the play squeezed the life out of a potential KU rally.

Two innings later, the game was out of hand.

"There's a handful of pitches that we get back, and we're in that ballgame," said KU starter Ryan Cyr. "This isn't going to discourage us. We're way better than what we played like."

Similar to the series opener, the Jayhawks needed to capitalize on those chances after the Horned Frogs were able to get to their starter early — this time Cyr.

After Cyr plunked TCU’s Zach Humphreys in the first inning, the redshirt sophomore left a pitch to Luken Baker, who smashed it some 425 feet over the wall in center. For the second straight day, the Horned Frogs took a 2-0 lead in the first inning and continued to add to it, tabbing another run in the second to jump out 3-0.

The damage could’ve been worse. Humphreys singled to lead off the third inning and then advanced to second on a one-out Josh Watson single. With the ball hit to right, Humphreys could have attempted to go first to third, but he opted to hold at second.

Michael Landestoy grounded into a force at second and A.J. Balta struck out to end the inning. Had Humphreys advanced to third — or had both runners advanced and then held on to the Landestoy ground out — the Horned Frogs might've been able to tack onto their lead.

But those missed opportunities plagued both sides.

Skyler Messinger walked to start the third inning and was nearly caught in a rundown on a groundout to first. The KU freshman managed to slide past a potential tag from Baker despite protests from the Horned Frogs' first baseman and dugout that he should have been called out.

Perhaps given an extra life, Messinger advanced to second after Rudy Karre was hit by a pitch. But the Jayhawks grounded into back-to-back force outs and failed to tally a run.

"Strength of their club is obviously pitching and they've gotten two tremendous starting pitching performances," said KU coach Ritch Price. "(TCU starter Sean Wymer) was obviously in complete command and did a really good job. I mean, he was tough to hit today."

After a quiet first three innings, KU got on the board in the fourth. Brett Vosik tabbed KU’s first hit of the game — a well-struck double that dribbled all the way into the corner in right — and advanced to third on a groundout.

Vosik tagged and scored on a fly ball to shallow right, narrowly beating out the throw by TCU’s Connor Wanhanen.

With Cyr settling in and blanking the Horned Frogs over the third, fourth and fifth innings, the Jayhawks had a chance to take control of the game. Instead, the sacrifice fly proved to be KU’s only offense before Cyr allowed two more runs in the sixth inning and was charged for one more after being pulled.

"I think the one positive for us, I thought Ryan Cyr was really good," said Price. "I was going to take him out after the fifth inning when it was still (3-1), but he asked me if he could go one more. Tried to reward his performance."

Cyr finished the day having allowed six runs (all earned) on nine hits with three walks. Battling temperatures in the low 40s and various levels of rainfall, the right-hander threw 100 pitches over 5 ⅓ innings, both of which were career-high marks.

While the bullpen kept KU in the game for much of Friday’s game, the same was not true on Saturday.

Conner VanCleave, who entered the game with a 11.25 ERA, was charged for six runs in 1 ⅓ innings of work. The freshman left-hander struck out the first TCU batter in the eighth inning, but then allowed back-to-back singles and a walk.

Facing VanCleave with the bases loaded, Baker smashed a towering shot to left field, tallying his second home run of the game and putting the Horned Frogs up nine.

"We might have just made Baker national player of the week," added Price after the game.

Right-hander Casey Douglas came in shortly after, but couldn’t quell the bleeding, giving up a walk and hit — the latter of which brought in a run — before getting out of the frame.

The teams exchanged runs in the ninth inning — KU's Mateo Zunica hit the first homer of his college career in the bottom of the ninth — but the final score showed a decisive victory for the Horned Frogs.

If there were a silver lining, though ...