For the first four months of his football off-season, Kansas tight end James Sosinski experienced what he described as almost no football-related activities.

Preoccupied from December through March with his role as a walk-on with KU basketball, Sosinski didn’t appear too rusty upon his April return to the gridiron, though.

Three days after getting back to Lawrence from a trip to San Antonio and the Final Four, Sosinski rejoined KU football for spring practices this past week.

“He caught a ball down the seam, and a couple guys bounced off of him,” coach David Beaty described of Sosinski's homecoming of sorts. “He's got some extra weight on him now. He looks good.” 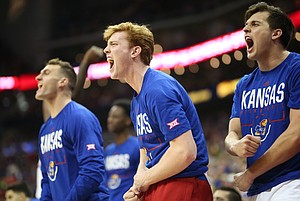 According to the scholarship football player, he spent far more time on the basketball court than football turf these past four months, despite his limited role with the perennial hardwood champs of the Big 12.

“Little stuff here and there,” the junior passing target reported of his football pursuits once he joined the basketball program. “I ran some routes at our indoor facility with some of our quarterbacks on some of our off days, but nothing too serious.”

Thus far, Sosinski, who transferred to KU from South Mountain Community College (Ariz.), where he played basketball but not football, has represented the Jayhawks more in a basketball capacity. His next appearance in a Kansas football game will be his first. 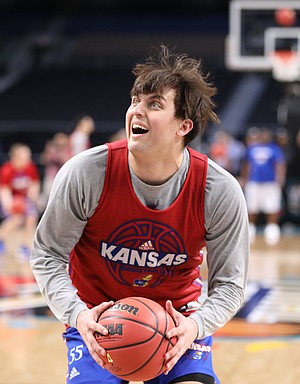 Still, it seems he could fill a larger role for Beaty’s program this coming fall, now that former tight end Ben Johnson has graduated and completed his eligibility. Redshirt freshman Kenyon Tabor and graduate transfer Mavin Saunders, from Florida State, are the only other tight ends on KU’s current roster.

Redshirt senior linebacker Joe Dineen enjoyed watching Sosinski’s basketball exploits from afar. Once the two-sport Jayhawk turned his attentions back to football, Dineen appreciated what he saw out of Sosinski even more, sharing the tight end made “two pretty big catches” in his spring debut.

“He’s a great athlete and I think he’s gonna help us a lot on the football field,” Dineen said. “And it was good to finally see him again.”

KU quarterbacks hit Sosinski for a completion twice on his first day back, and Beaty said the big target from Chandler, Ariz., didn’t get tackled on either.

“People fell off of him,” the fourth-year KU coach related. “So we're obviously really excited to have him back with us.”

Although Sosinski played sparingly for KU basketball, Beaty shared his plans to have the end-of-the-bench power forward speak to his football peers about the experience, in order to impart what he learned during his time playing for Bill Self, “because he lived in it.”

Said Beaty: “I think that's going to be very valuable for us.” 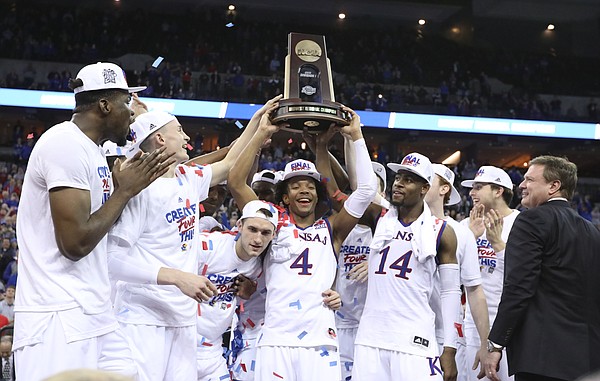 Kansas guard Devonte' Graham (4) hoists the Midwest Regional trophy as the Jayhawks celebrate a trip to the Final Four following their 85-81 overtime victory over Duke on Sunday in Omaha, Neb. by Nick Krug

Let's hope that Sosinski develops into the next Gronkowski!

When he checked into a basketball game, everybody said, "Who's that?"

Now when he shows up on Saturdays in the fall everyone is going to say, "That's the basketball player!"

Hopefully his teammates don't get jealous of him because he's the most famous player on the football team now.

Hopefully he has a very successful football season. If I were the QB I think I'd want to throw it up to the 6'-8" 260 pounder. He never looked all that agile compared to the other basketball players, but surely his experience will pay dividends for him on the football field in some way shape or form. I always think of Alex Gonzalez when I think of basketball players playing tight end, and how he credited basketball with helping him with his ability to seal off a defender and go up high for a catch.

Beatty probably is trying to convince Bill Self that he needs the basketball program to send him an athlete as repayment, but I'm sure that Self probably feels like they are even, since he let Connor Teahan try-out for football a few years before Beatty was around.

I think it's a great idea to have him speak to the football team about his experience. And I'm not joking or demeaning the football team but James Sosinsky was part of a winning culture. He was able to see what a winning coach wants from his players and how hard these players work to win. I'm sure there are a million other things that he can take from his experience and pass on but those are just a couple. I hope he has a successful football career here and takes the rest of the football team with him towards that success. RCJH.

KU BB will always be indebted to the FB team for loaning Clint Normore (?) and ? Mattox (?) in '88. Mattox had a Sosinski-esque role but Clint was the lead guard at times during the NC game in particular with some huge plays. Among my all time favorites.