Several Jayhawks get up to bat down an end zone pass to Southeast Missouri wide receiver Trevon Billington (14) during the fourth quarter on Saturday, Sept. 2, 2017 at Memorial Stadium.

While preparing for Central Michigan, it could have been easy for Kansas players to look at the Chippewas’ triple-overtime win against Rhode Island a week ago, recall the Jayhawks’ dismantling that same FCS program a year earlier, 55-6, and consider a 2-0 start to the season a foregone conclusion.

But KU’s coaches weren’t about to let that line of thinking take root. David Beaty instead emphasized the fight CMU showed as the pressure of not suffering an upset loss mounted. His assistants delivered similar messages. Offensive coordinator Doug Meacham referenced the Chippewas’ 2016 victory at Oklahoma State as proof the Jayhawks have to be locked in.

“I know they probably didn’t play as well in that first one,” Meacham said of CMU’s 30-27 win over URI, “but every week’s different. You can have that type of game and next week play (any team) tight. What happened last week really doesn’t matter to me. Really, there’s just so many examples of from week to week how it’s a different game, a different team, different matchups. You can’t take away from what they did last week and say, ‘Oh, we’re going to mow these guys over.’ No.”

With a step up from FCS opponent SEMO to CMU, out of the MAC, comes a more talented offense for the Kansas defense to try and shut down.

Defensive coordinator Clint Bowen said the Chippewas have talent in the backfield, as well as out on the perimeter.

“They’re a four-wide, spread it, throw it,” Bowen said of the attack quarterbacked by senior Shane Morris this past week (though redshirt freshman QB Tony Poljan could factor in more this week). “They’ll try to bang the run game in there a little bit. I like both their tailbacks, have ability, they can both hit it,” Bowen added of Jonathan Ward (147 yards and a touchdown vs. URI) and Devon Spalding (70 yards and a TD).

Beaty used three words to describe the skills of Willis, Spalding and sophomore receiver Brandon Childress: “freaks me out.”

Nationally, Kansas vs. Central Michigan doesn’t register as a buzz-worthy game. Inside Anderson Family Football Complex, though, a KU victory and the program’s first 2-0 start to open a season since 2011, feels monumental.

“I cannot overstate it. This is the most important game that we will ever play here in our mind,” Beaty said, “and it simply is because it's the next one. I don't care about the rest of the schedule right now. I care about this one. That's it. And that's all our kids care about. We can focus on that and only that.”

For a program that won two games during the course of Beaty’s first two rebuilding seasons, back-to-back victories would qualify as another sign of slow-but-steady progress. 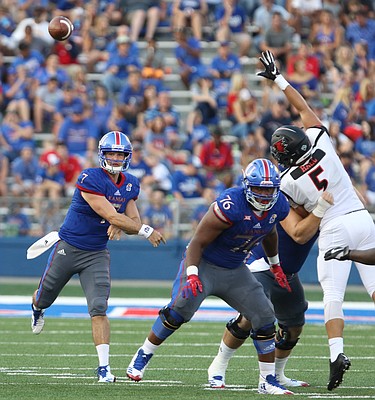 Kansas quarterback Peyton Bender (7) heaves a pass during the second quarter on Saturday, Sept. 2, 2017 at Memorial Stadium. by Nick Krug

This week, when Bender surveys the CMU secondary, he will have to remember he is about to throw into an opportunistic defense.

Bender, Meacham and KU’s targets — led by receivers Steven Sims Jr. and Jeremiah Booker and tight end Ben Johnson — had the past few days to identify and fix the miscommunications that led to incompletions and turnovers against SEMO. How much better the passing game looks in Week 2, Beaty said, also will depend on the play of KU offensive linemen Hakeem Adeniji, Jayson Rhodes, Mesa Ribordy, Chris Hughes and Antione Frazier.

“It's going to be critical. (The Chippewas) were able to apply some pressure to (URI) last week. Obviously, the balls, they go errant when you have people hanging all over you. I mean, it happens,” Beaty said. “So it's going to be no different than any other week in that regard. We're going to have to be able to keep (Bender) upright back there and let him go through his reads.”

The best players on KU’s roster thrive on proving their doubters wrong. For months, the veteran play-makers in the Kansas locker room quietly have taken up the idea that attaining bowl eligibility might not be that crazy this season. To keep such hopes vital, a win over Central Michigan is a must.

The Jayhawks are only a couple of weeks away from Big 12 play, and that’s when the schedule turns far more demanding and losses will most certainly come. If Kansas truly is a vastly better team now than it was a year ago, it has to demonstrate as much against a CMU team picked to finish fifth in the MAC’s West Division. The more convincingly the Jayhawks win, the more the fan base will get fired up about the direction of the program, and the possibilities for this fall and beyond.

I really hope your prediction is right Benton. I do have to say I don't have as much optimism as you and I'm largely basing that on what we've done the past 8 years, even if this is a different team. But IF they can win this game, I would think the score would be more like 27-23. Either way, a win is a win and I'll take it whatever the score, even if it's 3-0. RCJH

Tomorrow's game is a must-win for Kansas. I won't get to see it or listen to it because I have something way more important to do: Be a groomsman in a wedding. Good luck to the Jayhawks, and I hope to find out KU won when the wedding is over!

We couldn't score 40 against an FCS opponent but we'll score 42 vs. CMU without a run game?

The D-allows 20 because, like last week, they are constantly placed in peril. KU 27-20.

I don't know if we don't have a run game. I read we purposely didn't run much due to the defense SEMO put out there. Also Williams was out 3rd string RB behind Taylor and Herbert.

√ KU run D vs. CMU run game I hope you are correct. It was a weakness last year (especially directly up the middle) and against SEMO, KU's defensive line did not make that many tackles for losses. Most of the tackles came from the linebacker position (apparently the design for Bowen's defense), and SEMO average 3.8 yards/carry which is below average. As a team, CMU rushed for 246 yards on 50 carriers or 4.9 yards/carry against Rhode Island, which is very good (KU gained 75 yards on 17 carriers for 4.4). Most believe the team that controls the line of scrimmage wins. The ultimate key will be can KU actually sustain drives (against SEMO that never happened) and shut down CMU's rushing game. Today and next week will indicate if KU has taken at least a small step forward in rebuilding their football program.

Keys have been noted here, the play of Dineen, moving around Wise and Armstrong. That was a good strategy. I think we will stop the run. I'm more concerned about pass, hoping at times Wise, Armstrong drop back off line to throw off the underneath routes, which i expect to be our big challenge.

Yikes! This first half has been an absolute mess!